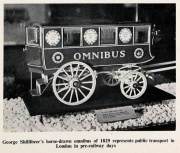 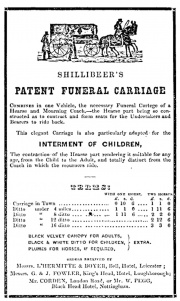 George Shillibeer (1797-1866) began his famous bus service from Paddington Green to bank of England on 4th July 1829. The first were a series of three deckers pulled by three horses abreast. Later, because of complaints about the width he introduced two-abrest with a third and forth horse kept as a back-up for long hills.

Worked for the coach company Hatchetts in Long Acre, the coach-building district of the capital.

In the 1820s he was offered work in Paris, France where he was commissioned to build some unusually large horse-drawn coaches of "novel design". The aim was to design a coach capable of transporting a whole group of people, perhaps two dozen, at a time. Shillibeer's design worked, and was very stable. It was introduced into the streets of Paris in 1827. Shortly afterwards, Shillibeer built another for a private Quaker school in Stoke Newington near London; this with a total of twenty-five seats, and which entered history as the first school bus.

Whilst in Paris, Shillibeer concluded that operating similar vehicles in London, but for the fare-paying public with multiple stops, would be a paying enterprise, so he returned to his native city.

1829 July 4th. His first London "Omnibus" took up service on the route among Paddington, The Yorkshire Stingo and the Bank via the newly built "New Road" (now Marylebone Rd), Somers Town and City Rd. Four services were provided in each direction daily. This service was described in the first advertisements as being "upon the Parisian mode" and that "a person of great respectability attended his vehicle as Conductor". An account of the new service was given in the Morning Post of July 7, 1829,

Saturday the new vehicle, called the Omnibus, commenced running from Paddington to the City, and excited considerable notice, both from the novel form of the carriage, and the elegance with which it is fitted out. It is capable of accommodating 16 or 18 persons, all inside, and we apprehend it would be almost impossible to make it overturn, owing to the great width of the carriage. It was drawn by three beautiful bays abreast, after the French fashion. The Omnibus is a handsome machine, in the shape of a van. The width the horses occupy will render the vehicle rather inconvenient to be turned or driven through some of the streets of London.

1866 August 21st. Died in Brighton and is buried in the church graveyard at Chigwell in Essex.