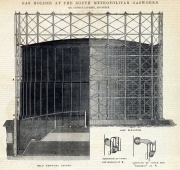 Chairman of the South Metropolitan Gas Co and one of Southwark's greatest industrialists.

Sir GEORGE THOMAS LlVESEY was born at Islington on 8th April 1834, being the eldest son of Thomas Livesey, then one of the officials at the Brick Lane Works of the Chartered Gas Co.

After a somewhat brief education at private schools, he was apprenticed, at the age of fourteen, under his father, who had meanwhile been appointed secretary of the South Metropolitan Co., continuing in this capacity till 1855. In this year he was made assistant engineer, and had charge in turn of nearly all the work that came into direct bearing upon a gas undertaking.

Between the years 1855 and 1862 he gradually took over the management of the works, until in the latter year he was appointed engineer to the company, his father retaining the positions of secretary and general manager. In this capacity he was responsible for the enlargement of the Old Kent Road Works, which were doubled in size, the older parts at the same time being rebuilt. This work was all carried out to his designs and under his personal direction.

He later acted as engineer for new works of the Tynemouth Gas Co., and was consulting engineer to the Coventry Gas Co., the Aldershot Gas Co. and other companies.

On the death of his father in 1871, he was appointed secretary, holding the two positions of secretary and engineer until 1882, when, on amalgamation with the Surrey and Phoenix Companies, he was elected a director of the enlarged concern, and in 1885 he was elected chairman.

He brought out several inventions, connected with the improvement of gas machinery and appliances, purification, etc., two of them the Livesey washer and the Livesey scrubber being in wide-world use today. The modern gas-holder as now constructed owes its inception to him the original example erected at the Old Kent Road Station became a model for many others at home and abroad.

At the time Mr. Livesey took charge of the management of the works as the company's engineer, the annual output of gas amounted to about 350 million cubic feet. In 1908 the output was over 12,700 million cubic feet. He was responsible for the introduction into the gas-making industry of the sliding scale, whereby, with a reduction in charges for gas, an increase in dividend is allowed.

The second connection in which he will be remembered concerns his efforts to encourage thrift and improve the condition of the employees of his company. He considered that gas-supply was tantamount to a public service, and of so great an importance to the public that an interruption of supply should not be jeopardised. This motive, coupled with the desire to enable the employ6s to benefit by the prosperity of the company, led to the introduction of his profit-sharing scheme, which later on developed into the co-partnership system.

He was a director of the Crystal Palace District (now the South Suburban) Gas Co., and chairman for several years, during which the co-partnership system was adopted by that company. His connection as a director with the Commercial Gas Co. was also followed by that business being conducted on co-partnership lines. He at one time or another held most of the important positions in institutions and associations connected with the gas industry,

His death took place at his residence at Reigate on 4th October 1908, at the age of seventy-four.