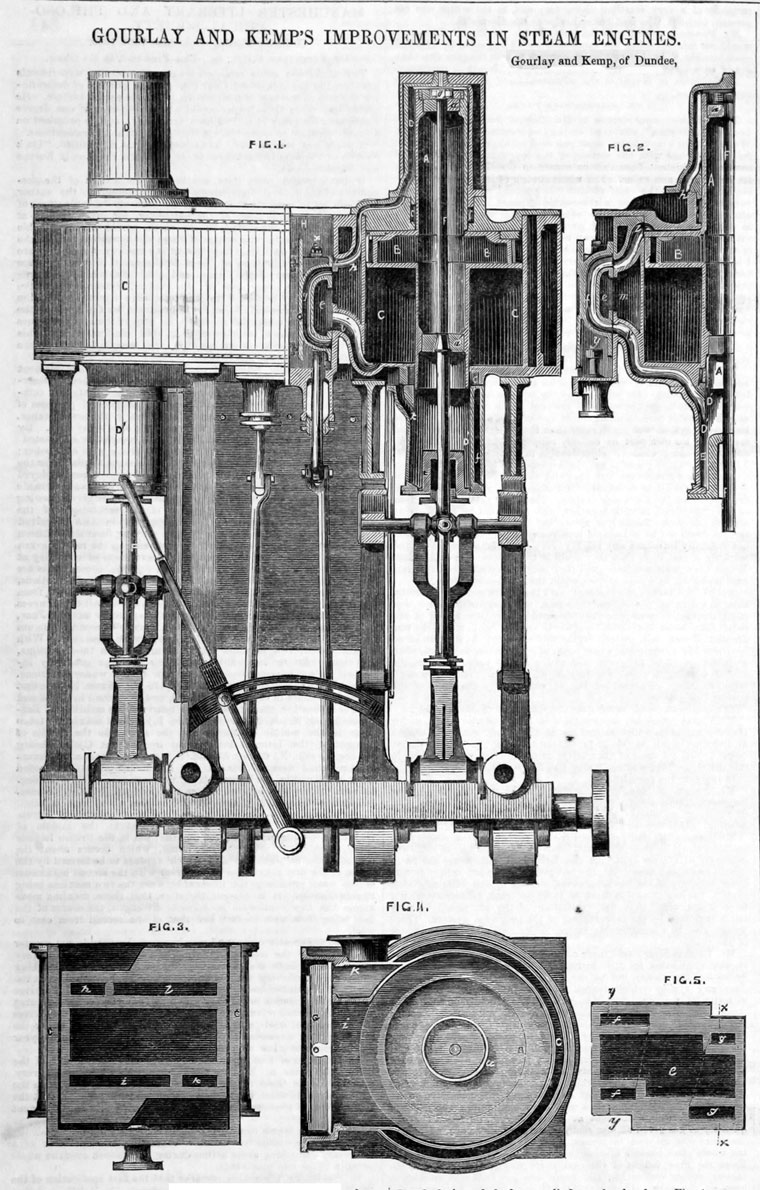 c.1800 Works established - see James Stirling and Co. These were extended from time to time over the following decades to make them suitable for turning out the heaviest and best class of marine work.

1843 Mr. James Stirling built an air engine at the foundry; it had a cylinder 16 inches diameter and 4 feet stroke, making 28 revolutions per minute, and giving 45 horse-power; it did all the work of the Dundee Foundry for upwards of three years, during which period no other motive power was employed. At the end of that period it was laid aside because of the failure of the heating vessels.

A very old beam-engine, which was working into the late 1870s, was one that was originally experimented on by Mr. Stirling, who converted it into a hot-air engine; it ran for some time so altered, but was eventually reconverted to steam.

1854 The Gourlay family established their shipbuilding yard on Marine Parade in Dundee, Scotland. Prior to this the yard had traded as a foundry. The main customer of the yard was the Dundee, Perth and London Shipping Co who ordered a dozen steamers from the yard.

1870 The yard was moved to a new site in 1870; the Camperdown Yard. Here, the Gourlay's made steel steamers for a couple of local companies. This kept them in business for the following twenty years or so.

c.1887 A 50-ton travelling crane over the erecting shop and two 30-ton travellers over the moulding shop had recently been erected. The works were driven by a tandem compound engine, and the power is communicated by rope and friction gear.

Dundee Foundry made the engines, that were taken across East Dock Street to be installed at Camperdown Shipyard.

1904 The orders for cargo-liners continued to come in along with the initial commission for tramps. In 1904 the business was of limited liability status.

From 1905 onwards the slump in freight orders led to orders drying up.

The Camperdown yard closed in 1908.