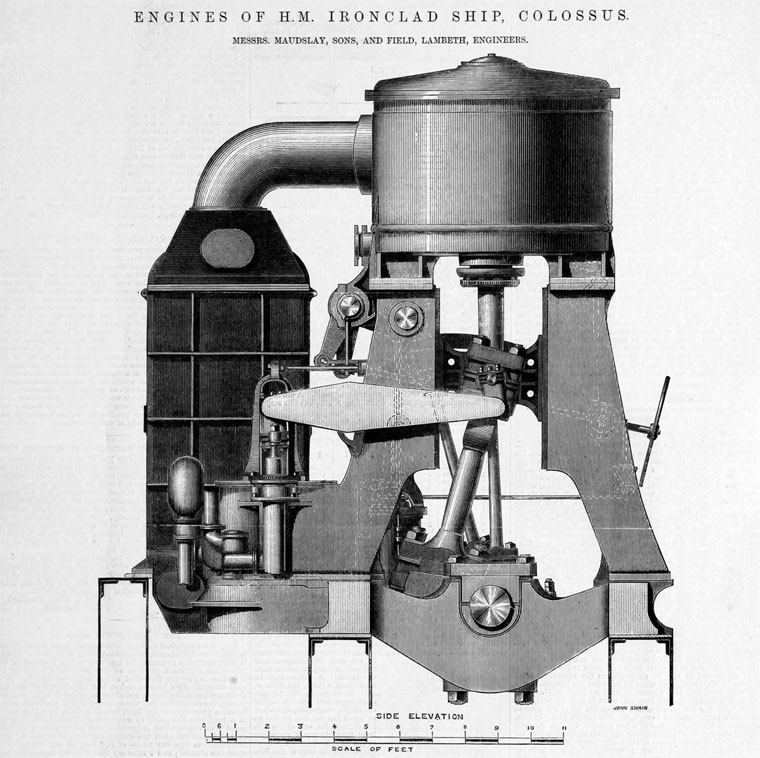 1884.Engines of the Colossus - Maudslay, Sons and Field, Engineers.

1859 'FIRING OF HOLLOW SHOT WITH MOLTEN IRON. The Colossus, screw steamship, lighted fires in the Steam Basin at Portsmouth, yesterday, for the purpose of testing the efficiency of her furnace in the forming hollow shot with molten iron. The furnace worked in the most satisfactory manner, supplying without any difficulty fully one ton of molten iron per hour. The nature of the experiment, yesterday, was merely tried with reference to its effects as compared with red hot shot. The hollow iron globes were filled with the molten iron from the furnace on board the Colossus, and were then conveyed in an iron bucket to a boat on the opposite side of the quay, which pulled aboard the Excellent. The average time from the metal being off from the furnace until the missile left the gun on its errand of destruction was six minutes. To ascertain the effects of the practice, it was, of course, necessary that the shot should effect a lodgement in the object fired at; but it was found from the rotten state of the serpent and the short range (800 yards) to be a matter of too great difficulty. Ten shots were fired altogether, two of which burst, but the metal inside of them had lost too much of its liquidity, from the length of time it had been drawn from the furnace, to produce the effects intended in its liquid state. The experiments will be continued the Colossus.'[1]

'EXPERIMENTS WITH BALL FILLED WITH MOLTEN IRON. For many days past a sharp look-out has been kept upon the movements of the Stork screw gunboat, tender to the Excellent, Captain Richard S. Hewlett, C.B. Some time since the Stork screw gunboat tender was fitting at Portsmouth with a furnace for filling hollow shot with molten iron, and the Undaunted, 46, frigate, had been prepared with iron plates of such thickness as to render her proof against 68-pound shot at 400 yards' range. On Wednesday evening the Stork went the harbour, and moored off from the starboard side of the Undaunted 400 yards. A little before 12 at noon she hoisted a red flag, another being also placed on board the frigate, to warn all boats off. At half-past 12 the first hollow shot, filled with molten iron, was discharged from the Stork, and went clean through both iron plates and wood into the body of the ship, about four feet above the water line. A second shot was fired at a short interval, when smoke was perceived to burst through the ports and hatchways, and in few minutes more a body of flame. The ship was on fire. As soon as the fire was observed, the Stork slipped her moorings, and steaming to the head of the Undaunted, set the fire-engine to work. Signal was also made to send a body of men from the Excellent to man the large floating fire-engine, and to the Comet Government tug to tow with all haste to the rescue. Such, however, was the destructive nature of the molten iron, that the doomed vessel was soon one solid mass of flame, and it was considered by Captain Hewlett expedient to scuttle the ship. This was accordingly done. After firing six rounds into her between wind water, down she went at her moorings, leaving only the top rail of her forecastle deck and poop visible. The wind being fresh from the S.E. caused the poop to take fire, but by this time the powerful floating engine, worked by 100 hands, poured tons and tons of water upon the burning timbers, and in twenty minutes the fire was subdued. It is impossible to attach two much importance to this undoubted proof of what gunboat fitted like the Stork can do against an enemy's line-of-battle ship. A ship as large as the Duke of Wellington, 131 guns, and 1,200 men, would have shared the fate of the Undaunted. The inventor of the "furnace" and "molten iron" poured into a hollow shot has shown results which are destined to tell with terrible effect wherever his device is brought into requisition.'[2]

c.1909 HMS Colossus, powered by steam turbines, was a battleship designed and constructed by Scotts Shipbuilding and Engineering Co and launched in 1910; she was of the Dreadnought class, the first built on the Clyde; her sister ships were HMS Hercules and HMS Neptune.