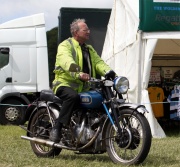 HRD were motorcycles produced from 1924 to 1928 by Howard Raymond Davies, who used his initials for his own make. The design was by Massey Motor Co of Wolverhampton.

1924 Howard Davies with E. J. Massey, decided to build his own motorcycles. Having had no success in the TT for the previous two years, he wanted to produce a reliable, quality, medium-weight racing machine, with good handling. He chose a JAP engine, Burman gearbox, Webb forks and other components from AMAC, Renold, BTH and KLG Sparking Plugs. There was a range of models, all had three speeds, a saddle tank, looked good and performed well. They were the ohv 350cc D70 and D80, 488cc D90, D70S and a 488cc sv model, with or without a sidecar.

1925 Howard Raymond Davies promoted his machine as 'Produced by a Rider' and entered the TT where he came first in the Senior and second in the Junior.

1927 The range had several new models, including the Super 600 with a 597cc ohv engine, and other versions at the lower end of the scale.

1928 Most of the models were still being produced, but by now the company was in financial trouble. Despite their quality, the bikes were expensive, so he tried to make lower-cost models, but he went bankrupt. Early in the year the firm was bought by Ernie Humphries of OK-Supreme who then sold it on to Philip C. Vincent, for £500, who moved production to Stevenage and produced Vincent-HRD machines.