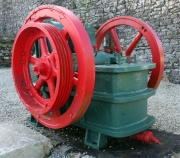 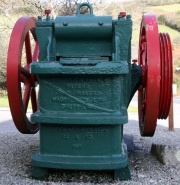 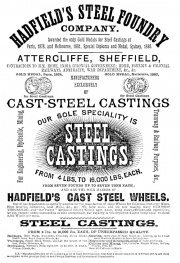 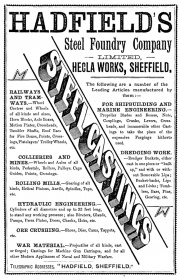 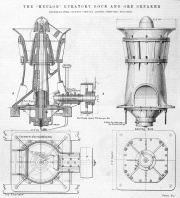 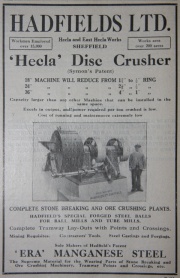 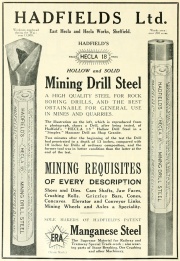 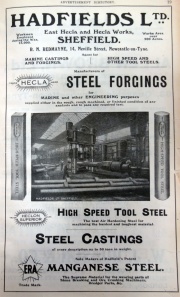 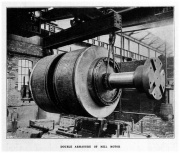 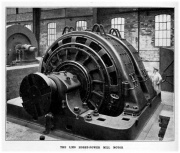 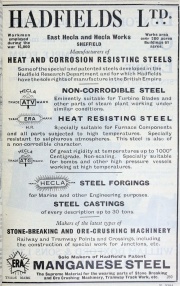 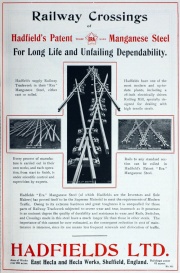 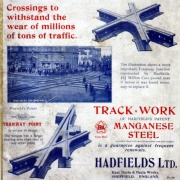 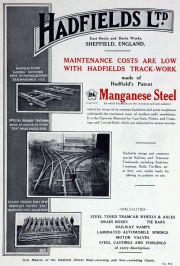 1931. Plant for the Production of Concrete Aggregate for the Cauvery Metur Dam. 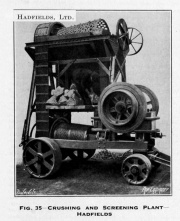 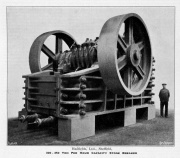 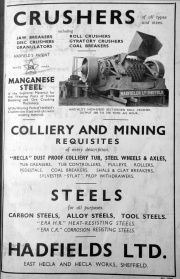 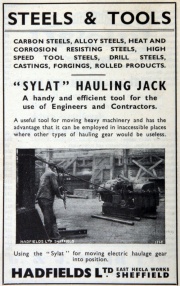 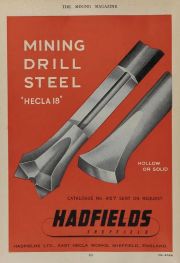 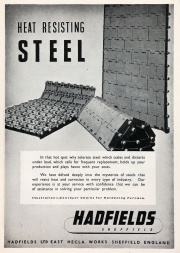 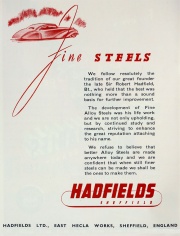 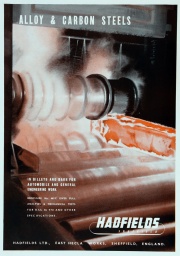 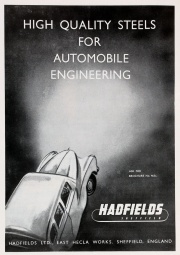 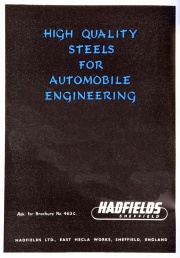 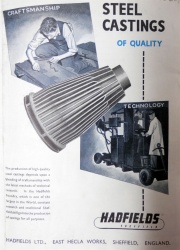 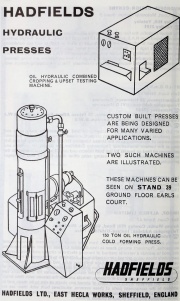 c.1856 he started wire making on his own account, later forming a partnership with Jabez Shipman as Hadfield, Shipman and Co

1868 He set up his own small scale steel casting business with 60 employees.

c.1872 Later he bought the site which became the Hecla Works[1] and recruited a steel moulder, John Mallaband, from the firm of Vickers. Pouring crucible steel into special moulds was technically demanding work and many people felt this was a rash decision. Yet the firm succeeded and produced weapons, which had previously only been manufactured in France. [2]

1882 Robert Hadfield (junior) discovered Manganese steel which was hardened by quenching it in water from a temperature of a 1000C. The hard steel was to be used in the manufacture of tram wheels. He patented his work in 1883-4 but continued to carry out further experiments before publicising his findings in 1888, which were supported by a lecture tour.

1888 Robert Hadfield (senior) died; Robert Hadfield (junior) immediately made the firm a limited company, Hadfield's Steel Foundry Co. Ltd. [3] He removed half of his father's workforce, replaced them with his own men and took over the position of chairman.

1888 Public company. The company was registered on 24 April to acquire the business carried on by a firm under the same title. [4]

1891 Although a hard task master Robert Hadfield was one of the first employers to introduce the eight hour day in 1891 and co-wrote a book on the subject 'The Shorter Working Day'.

1897 Site of the East Hecla Works acquired[6] which were laid down at Tinsley; the original works at Attercliffe were largely converted into chemical and physical laboratories.

1912 The Hadfield Steel Foundry Company, of Sheffield, has been awarded the contract for 14-inch shells for the American Navy[9]

1919 Harper Bean Ltd was formed as a public company to bring together a number of interests in car manufacturing, including 166,666 shares in Hadfields[12].

1920 At Darlington Royal Agricultural Show they exhibited machinery, castings and forgings including a disc crusher. [13]

1926 The firm bought A. Harper, Sons and Bean, a Dudley based car firm, which failed to bring the expected profits and was later sold in 1936.

1926 They were appointed official contractor for stone-crushing plant to the Irish Free State, to county surveyors in which it had during the last seventeen months, supplied nineteen complete portable crushing plants.[15]

1933 Established new company, Beans Industries to acquire the fixed assets and stocks of Beans Cars Ltd; the company's interests in Beans Cars was written off[16]

1955 Public offer for sale of shares in the company by the Holding and Realisation Agency[22].

1961 A group of companies including Wellman, Smith, Owen Engineering Corporation and Newton, Chambers and Co offered to subscribe to new shares in Hadfields as a way of injecting cash into the company[25].

Like other parts of the Sheffield steel industry, the company was reorganized into separate companies: foundry, steels, engineering, etc.

1967 Acquired by Dunford and Elliott at the instigation of the Industrial Reorganisation Corporation to increase the size of the units of the industry so as to be able to justify reinvestment[26].

1967 Merged the steel foundry operations with Samuel Osborn and Co[27] [28] to form Osborn-Hadfield Steel Founders, 59 percent owned by Osborn and 41 percent by Dunford and Elliott[29]

1969 The Osborn-Hadfields steel casting joint company was subsequently acquired by Weir Group for merging with their foundries.[31]