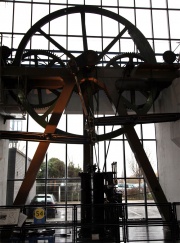 1. 1833 Stationary winding engine for the Stanhope and Tyne Railway. Exhibit at the National Railway Museum, York. 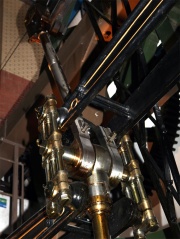 2. Stationary winding engine for the Stanhope and Tyne Railway at the National Railway Museum. 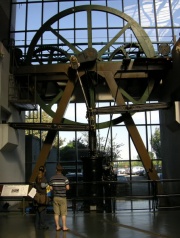 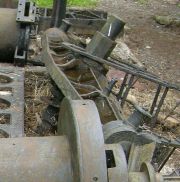 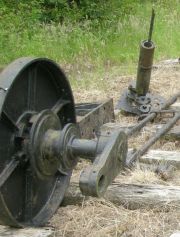 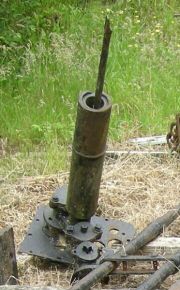 Late 1740s William Hawks, Senior (1708–1755), a foreman smith at the Swalwell iron manufactory of Sir Ambrose Crowley, established workshops on the riverside at Gateshead, turning scrap metal into tools and other useful products.

1754 William Hawks, a blacksmith, established the Gateshead Iron Works. His principal trade was making claw-hammers for joiners. Eventually he became a large manufacturer of bar-iron. Several partners joined him. [1].

1770s William Hawks and his brother-in-law, Thomas Longridge, formed a partnership. They acquired a plating forge at Beamish in 1779, additional smithing shops at Ouseburn in 1780, a forge at Lumley ( Lumley Forge?) in the mid-80s, and slitting and rolling mills on the River Blyth in the 1790s [2]. Another source indicates the brothers-in-law took over the Bedlington Ironworks on the River Blyth in 1782. The Gateshead works were also expanded substantially

1788 The Bedlington works were acquired by Hawks, Longridge and Co of Gateshead; Bebside mill was still in production [4]. Hawks and Longridge closed the blast furnace at Bedlington. It was replaced with a rolling mill; the works became largely concerned with the handling of semi-processed iron.

1790s Hawks's London partners, the Gordon and Stanley families, handled the supply of products to the Navy Board, a principal customer; the works accordingly became known as New Greenwich.

1809 Hawks and Longridge sold the Bedlington Ironworks to Gordon and Biddulph who put Michael Longridge, nephew of Thomas Longridge, in charge

c.1830 Made an unusual beam engine for Seaham Harbour. See below.

1833 Hawks and Company winding engine for Weatherhill Incline near Stanhope Co Durham. 50 HP, 60 psi. Cylinder failed in the 1890s and was replaced by one from Thomas Murray.

1837 The partnership of iron and steel manufacturers carried on under the firm of William Hawks (senior) and Co, of Gateshead Iron Works, and as Hawks, Stanley and Co in the City of London was dissolved as regards Sir Robert Shafto Hawks [6]

1840 George Crawshay acquired one third of the shares in the company [8]. OR 1842 One of the Crawshays became a principal partner in the firm [9].

1841 Joseph Hawks withdrew as a partner from both firms [10]. George Hawks acquired his shares [11].

1840s George and Edmund Crawshay took over the running of the Gateshead works of Hawks, Stanley and Co. [12] which became Hawks, Crawshay and Sons

This engine was built c.1830 to provide a variety of services: to operate the gates of Seaham Harbour, to pump sea water to the town, and to work three ballast cranes. It operated until the 1940s[13]. Many parts of the engine and machinery were saved for preservation, and are now lying in the open air at Beamish Museum. See Geograph entry.

The engine was of unusual construction, making extensive use of cast iron lattice framing and bearing pedestals. This would have provided a rigid structure, made in transportable pieces, with the minimum amount of civil work. The masons' work was further minimised by the absence of an engine house. Large pieces of the lattice framework can be seen in the foreground of photo 5. In photo 6, the iron casting with elliptical holes, seen behind the rope drum, stood vertically between the engine's side frames, below the beam's pivot point.

The engine's cast iron rocking beam was well-provided with stiffening webs, but even so an old photograph shows that it was further reinforced by the addition of a large kingpost and trusses. Connected to the end of the beam, outboard of the connecting rod, were two long vertical rods, presumably working a pump. The pair of rods can be seen in photo 5, lying on the ground between the bedplate and the pump.

The old photo shows three winding drums. There is one on each side of the engine, each being driven by a crank. One of these drum shafts had a pinion which drove another drum shaft via a larger gear. The drums could be disconnected by dog clutches. Dog clutches can be seen in photos 6 & 9. The large diameter collars adjacent to the drums were presumably for brakes. Each outer drum shaft had a large gear on its outboard end. It is possible that these allowed the outer drums to be turned by other means if the engine was unavailable. The machinery was accompanied by strong wooden shear legs.