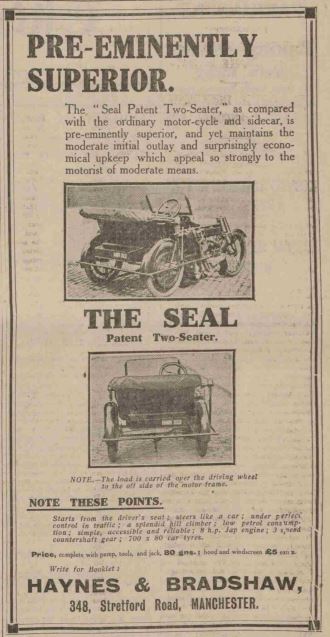 Between 1912 and 1924 a very unusual machine was listed. It was classed as a three-wheeled Sociable and was a special form of motorcycle with a sidecar that had been widened to carry both driver and passenger, while the mechanics were open to the elements. It was powered by a large V-twin JAP engine with a three-speed gearbox. Both were mounted in a frame built from straight tubes clamped together and the front suspension was a type of leading-link with the forks connected to a steering wheel in the sidecar. It appears not to have been listed after 1924.

1930 A commercial version appeared. The driver had a small open-topped cabin that allowed the whole of the sidecar to be used as a goods carrier. Called the Progress, it was revised during the year.

The newly designed Seal had a central front-wheel and became known as the New Progress.

1932 A very strange-looking carrier appeared. This had its 680cc JAP engine mounted above the front wheel, which was driven by chain via a three-speed-and-reverse gearbox. It's unconventional appearance meant that it was not a success and it soon disappeared from the market.

Progress was a motorcycle produced in 1930, in Manchester.

This was the name used by Haynes and Bradshaw for their strange three-wheeler, after a revision and the appearance of a commercial model. In order to increase capacity, the driver sat on the machine rather than in the sidecar.

The company only used the name for a few months.