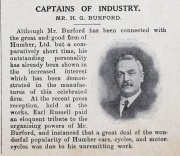 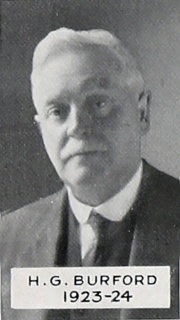 Henry George Burford was born in 1867.

He was apprenticed to W. Sibley and Sons, Martock, and subsequently gained engineering experience with various firms as Foreman and Manager.

In 1897 he became Director of Milnes-Daimler, Ltd., London, and subsequently also Director of Daimler Motor Co., Germany. He was one of the pioneers of the Automobile Industry and was intimately connected with the introduction of omnibuses to London - he was a Director of the National Omnibus Co., Ltd., for twelve years.

He founded the firm of H. G. Burford and Co., manufacturing lorries, and started a similar firm in Canada.

He was President of the Institution from 1923 to 1924 and was a Member of Council for a number of years.

HENRY GEORGE BURFORD had a long connection with the motor industry and was especially concerned with the development of the commercial vehicle, being one of the pioneers of London's motor buses. On the completion of a six years' apprenticeship in 1888 with Messrs. William Sibley and Sons, Parrett Iron Works, Somerset, he gained experience during the next five years as foreman and manager with various engineering firms including Messrs. Davey, Paxman and Company, of Colchester, and Messrs. Easton and Anderson, of Erith.

In 1896 he went into business on his own account as a motor car sales engineer and was interested in the introduction of the private motor car. In 1902 he became manager to Messrs. George F. Milnes and Company, Ltd., and four years later was appointed engineer and managing director of the Milnes-Daimler Company, Ltd., London. Subsequently he filled positions as director of the Mercedes Company, Germany, and general manager of the Humber Company, Coventry, with responsibility for a personnel of over 3,000. He then became a life director of Messrs. H. G. Burford and Company, motor lorry manufacturers, and was the managing director of that firm's ancillary at Fremont, Ohio, U.S.A. He was also, at one time, director of the Societe Anonyme Austin works in France. Of recent years he had been chiefly engaged as a works organizer and consultant.