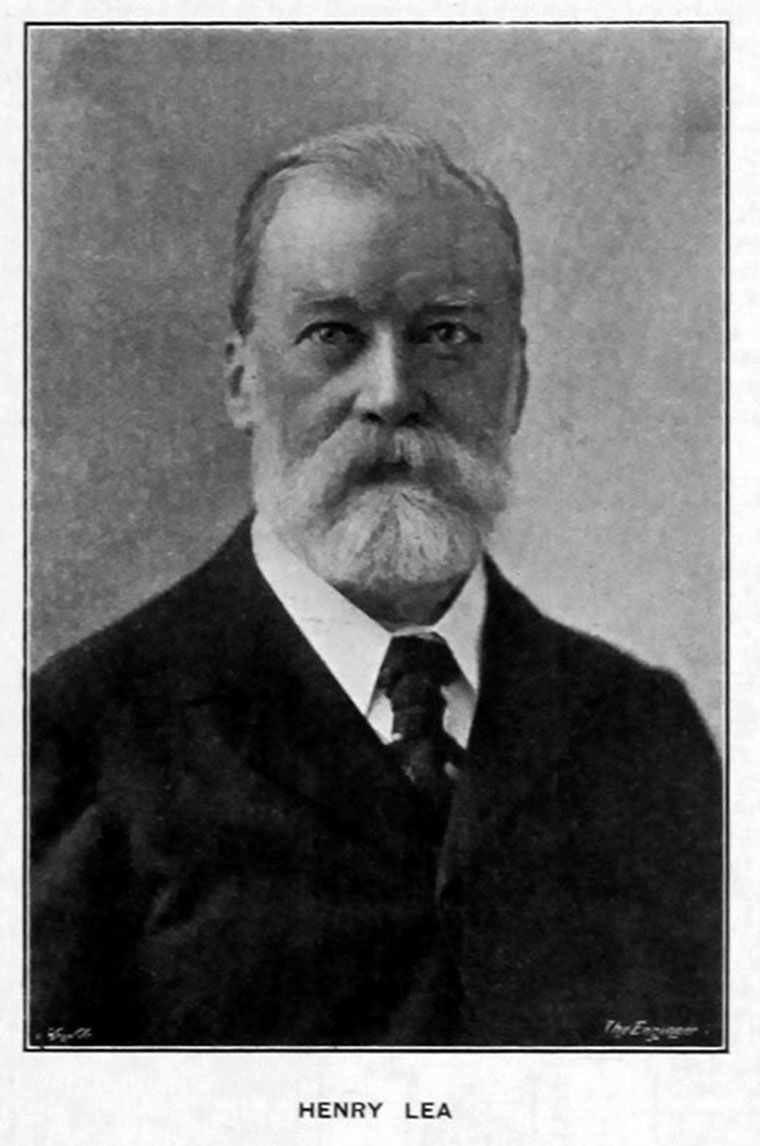 HENRY LEA was born in Birmingham on 6th January 1839, and was educated at King Edward's School in that city.

Displaying a remarkable gift for mechanics, even while at school, he was apprenticed to Mr. J. E. Hodgkin, who owned a small factory in Berkley Street, Birmingham, which, later on, was acquired by Messrs. May and Mountain. There he obtained a thorough knowledge of the practical side of engineering, and at home he studied the theory.

On leaving Messrs. May and Mountain he entered the works of Mr. Walter Williams, at Albion, where he acquired a knowledge of rolling-mill practice and bridge construction.

In 1862, at the age of twenty-three, he started business on his own account as a consulting engineer in Birmingham, and gradually built up a large connection. For a time his work covered mostly the various branches of mechanical engineering practice, but in 1882 it was supplemented by electrical work. In that year he carried out the electrical lighting of the Birmingham Town Hall, and he was also associated with Colonel Crompton and Mr. (now Lord Justice) Fletcher Moulton in drafting the first Electric Lighting Order, namely, that for Chelsea.

For many years, he was honorary consulting engineer to the Birmingham General Hospital, and when the new hospital was erected he designed and put down the electric-motor installation for working the fans in connection with the ventilation scheme.

Apart from his business, Mr. Lea's bobby was the making of models of all kinds of machinery at home, and at the time of his death he was engaged on a model of the latest type of Midland locomotive.

He was elected a Member of this Institution in 1860, and served on the Council during 1898-99, and from 1902 until his death. He was one of the Institution's representatives on the Engineering Standards Committee, and was a member of the Sectional Committee on Screw Threads and Limit Gauges. He was also a Member of the Institution of Civil Engineers, and of the Institution of Electrical Engineers. He helped very considerably in the organization of the successful Meeting of this Institution in Birmingham, July 1910, which was held jointly with the American Society of Mechanical Engineers, and acted as one of the Vice-Chairmen of the Reception Committee. He was is member of some of the principal philanthropic institutions in Birmingham, and rendered good service on the committees of the General Hospital and Institution for the Blind.

His death took place at his residence in Edgbaston, Birmingham, on 20th July 1912, in his seventy-fourth year.

He served his apprenticeship to the late J. E. Hodgkin, of Birmingham, and from 1862 until his death he engaged in consulting practice in that city as senior partner in the firm of Henry Lea and Thornbery, latterly Henry Lea and Son.

In that capacity he was responsible for the design and erection of machinery, mechanical and electric-lighting plants, including the original installation at Birmingham Town Hall, and other work.

HENRY LEA was born at Birmingham in 1839, was educated at King Edward's School, and received his first training as a mechanical engineer under Mr. J. E. Hodgkin and Messrs. May and Mountain, of Birmingham.

He afterwards spent some time in the works of Mr. Walter Williams, where he acquired a knowledge of rolling-mill practice and bridge construction.

In 1860 he was elected a member of the Institution of Mechanical Engineers, and two years later he began practice as a consulting engineer. His practice for twenty years was that of a mechanical engineer, but in course of time he took up various electrical matters, and in 1882 he definitely added all classes of electrical work to his former practice. In the same year he carried out the lighting of Birmingham Town Hall by means of glow lamps, replacing the former installation of "Jablochkoff candles." This was at the time the largest installation of glow lamps that had ever been carried out; the power was obtained from a rolling-mill engine at the Winfield Works, through countershafts, and the transmission was by underground mains in iron pipes.

Mr. Lea was also associated with Colonel R. E. Crompton and Lord Justice (then Mr.) Fletcher Moulton in drafting the first electric lighting order, that for Chelsea. He was responsible for a large number of lighting and power installations, including the lighting of the Birmingham Technical School and the Birmingham University, and an electric fan installation at the Birmingham General Hospital. He served on the Engineering Standards Committee as a representative of the Institution of Mechanical Engineers, and was twice Member of Council of that Institution.

He was elected an Associate Member of the Institution of Electrical Engineers in 1884, and was transferred to full membership in 1893, being also Chairman of the Birmingham Local Section for the session 1902-3. Mr. Lea was possessed of great mechanical skill, and in his spare time constructed models of railways and locomotives, many of which were shown at exhibitions.