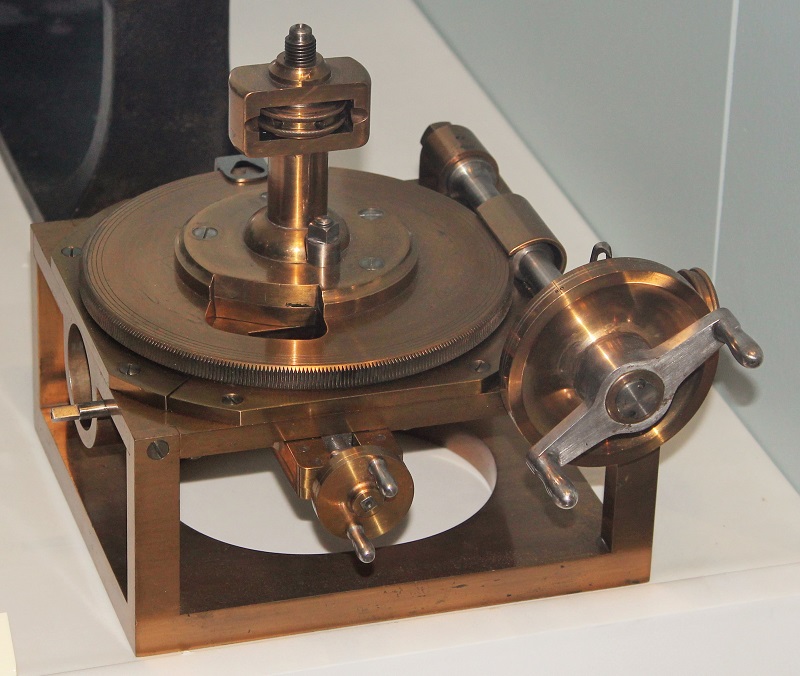 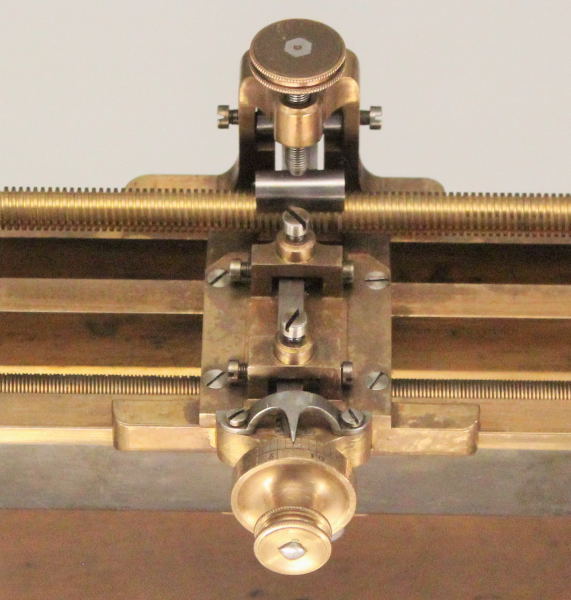 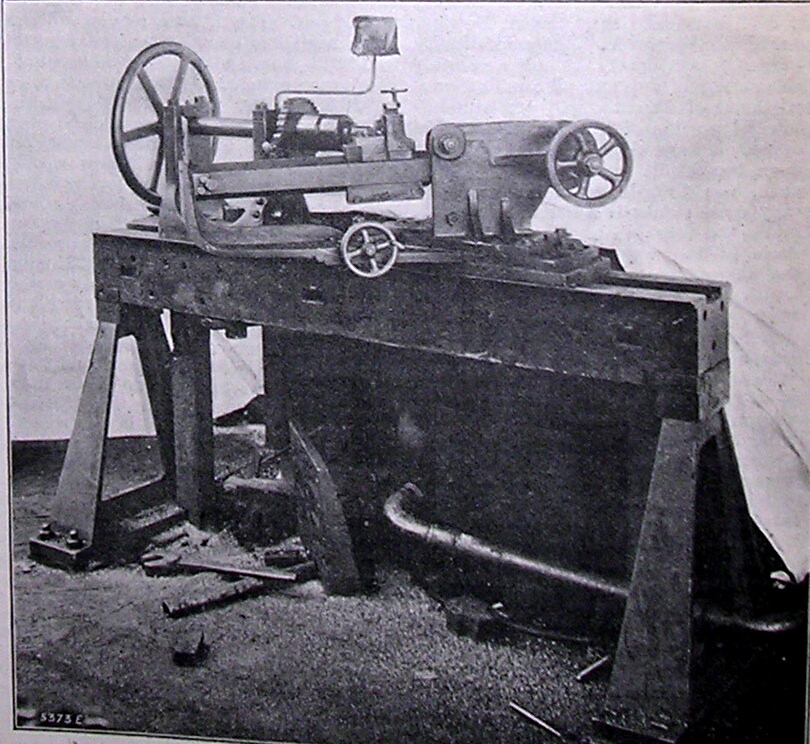 1806 Some machines were observed at Maudslay's works in Margaret Street, Cavendish Square, and described in Olinthus Gregory 's Treatise of Mechanics, published in 1806[2]. Drawings were produced by John Farey and may be seen here . One of the machines described was a treadle lathe with four-speed pulleys. The large lathes in the works were turned by men cranking large wheels. A strap from the large wheel turned pulleys fixed to the ceiling, from which the lathe was driven by a catgut belt. The ceiling pulleys were mounted in a weighted frame which maintained belt tension. The operator had control of the drive by fast and loose pulleys, rather than stopping the men turning the great wheel. The text also describes how gears were cut using the large lathes. The workpiece was held in the chuck or on the faceplate, and the angular positions set using the index holes in the largest pulley (17 concentric circles of holes). The rotating cutter had four teeth and its spindle was held in a frame held by the toolholders on the compound slide. The power was taken from the great wheel, and speed was stepped up by pulleys to a remarkable 7300 rpm. The spindle was set loose in its conical bearings such that it when it expanded it would would have a satisfactory running fit. The cutter spindle could be angled for cutting wormwheels. The text includes a non-too lucid description, and a drawing which looks like the work of M. C. Escher, of an arrangement involving oblique slots which appears to serve to adjust the height of the compound slide.

1825 A 'good second-hand Turning Lathe, by Maudsley' was advertised for sale, along with a braiding machine,at 44 Chandos Street, Covent Garden[3]

He adopted various methods to generate screw threads. One way is frequently described in histories of engineering in terms which convey the impression of a primitive method. In fact nothing could be further from the truth. Even the noted machine tool historian K. R. Gilbert might have inadvertently conveyed this impression, when writing: 'In the method finally adopted a hard-wood cylinder was rotated in a suitable holder against a crescent shaped knife held obliquely to its axis. The knife in cutting into the cylinder caused it to traverse, thus generating a screw which could be copied in steel.'[5] In fact Maudslay produced a very sophisticated device to accurately guide the wooden or soft metal cylinder. The device is on display in the Science Museum, and the quality and sophistication will be apparent from the first two photographs above.

In response to a brief article in 1843 about a method developed by Shanks of Johnstone for cutting screws in a lathe, Joshua Field wrote that while the machine was ingenious, he could not perceive, from the drawing presented, any novelty in it, 'A similar machine, made by the late Mr. Maudslay, had been in use in Maudslay and Field's manufactory for the last fifteen years.' [i.e. c.1828]. He also mentioned that the screwing dies invented by Joseph Whitworth 'cut out the threads of screws as clearly as if done by a chasing tool, and entirely without compression'.[6]

Staff from 'Engineering' magazine visited the works when its contents were about to be sold off, and reported on their findings[7]. Many of the machine tool photographs are reproduced here. Their inclusion does not necessarily imply that Henry Maudslay was involved in their design, although all the machines illustrated do have some Maudslayian features.

The shaping machine is unimpressive. It appears that the coarse setting of the cutter height demands the adjustment of the nuts on four threaded columns. The bedplate supports clearly point to Henry Maudslay's era. It is a pity that we do not have a photograph of the other side, to see whether the machine had automatic traverse. According to J. G. Moon, the stroke could be adjusted by moving the crankpin in a slot.[8] It was able to cut in both directions, using a rotating tool holder later revived by Joseph Whitworth. A point of interest is that James Nasmyth claimed to have invented the shaping machine or 'steam arm' in 1836. Maudslay's machine surely predated this. As W. Steeds points out, it is unlikely that Maudslay's works would have built their machine if something much better had been available from Nasmyth at the time.