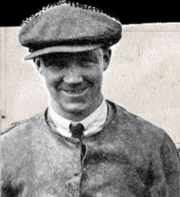 Herbert 'Bert' le Vack (1887 – 17 September, 1931) was a motorcycle world speed record holder throughout the 1920s and earned the nickname the 'Wizard of Brooklands' for his expolits.

An expert racing engine tuner, le Vack worked for some of the great marques and in the late 1920s joined Motosacoche in Switzerland as the works rider, chief designer and tuner.

Bert le Vack was killed in an accident in 1931 testing the Motosacoche A50 in the Swiss Alps.

Despite his surname, Bert le Vack was born in North London and was of Scottish descent, the son of an upholsterer and antique dealer Albert Edward le Vack. Bert's grandfather was John le Vack, a Scottish steam locomotive engineer, who moved to London from his birthplace in Caithness.

Bert's first job was with Legros and Knowles, of Willesden Junction.

He moved on to work for Daimler, Napier and the London General Omnibus Co.

Le Vack began his racing career on bicycles but once he visited Brooklands he began tuning motorcycles and won the first hill climb he entered on a 1909 Triumph.

In 1912 he competed in the London to Edinburgh Run and in 1913 he was working with another JAP test rider at Brooklands called John Wallace, who was sacked for being 'under age'.

On the outbreak of the First World War they both turned their talents to assembling and testing aircraft engines. Wallace founded Duzmo Motorcycles

After the war le Vack had his own garage and it was a chance exchange of a Scott for an MAG-engined Edmund that re-awakened his interest in motorcycle racing. Tuning up the Edmund led to the neglect of his business, so when he had an offer of employment from Wallace he agreed and began developing Duzmo engines. He then built a competition motorcycle that he used in competitions and demonstrations. He called the bike the 'Ace' and then it became the 'Duzmo' in 1920 when Bert became well known as a racer.

Towards the end of 1920 Bert moved to the Hendee Manufacturing Co, who made Indian motorcycles in Springfield, Massachusetts. He joined their London Depot and developed the eight valve Indian engine.

Bert married Ethel Dale in 1912 and there were four children. He divorced Ethel in 1929.

Le Vack was very much in favour of using alcohol-based fuels in racing and obtained supplies from a London distillery. This led to an offer to work as an engine designer for John A. Prestwich, founder of the JAP company who produced racing engines for many top marques, including Brough Superior. Le Vack used his experience of the Indian Powerplus, on which he won the famous 500-Mile Race at Brooklands in 1921, to help JAP develop their British vee-twin into what he called a "Yank-buster" - the 'Super Big Twin', so called because of its 986 cc ohv engine. (Indian subsequently dropped out of international competition).

Although le Vack only stayed with JAP for four years he played a significant part in their success and JAP advertisements in the Motor Cycle showed Bert on a Brough Superior with the 976 cc vee-twin JAP engine. As well as his tunign knowledge, le Vack gained a reputation for blending special racing fuels and had his own workshop in the Tottenham factory. Described as a quiet spoken man with few friends, le Vack became something of an enigma.

In a rare interview for The Motor Cycle in 1923 with the title 'The Making of a Speed Man' he described his early days when he nearly blew himself up by looking into a petrol tank at night with a match.

In the late 1920s he joined Motosacoche in Geneva, Switzerland, for whom he had already ridden in the 1914 Isle of Man Tourist Trophy. Motosacoche built racing motorcycles and le Vack joined as the works rider, chief designer and tuner and was killed in the Swiss Alps on the 17th September 1931, while testing the Motosacoche A50 on public roads close to their factory