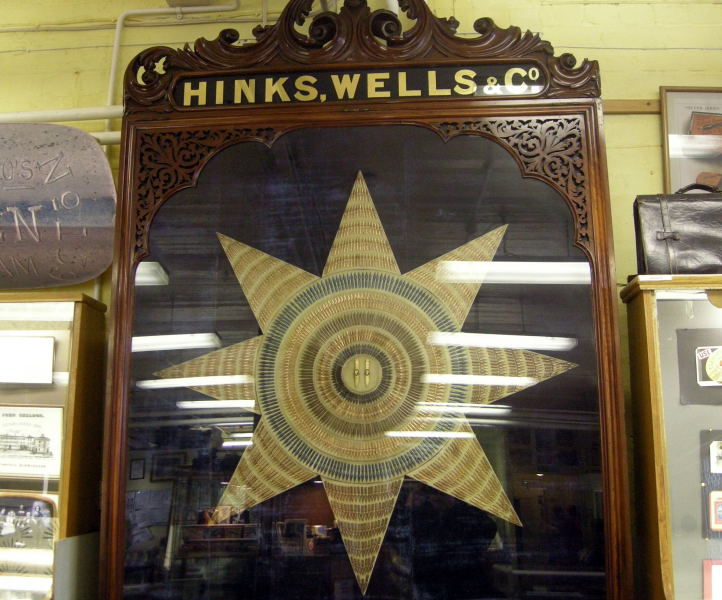 Detail of pen knib display at The Pen Room

1836 George Wells set up the company.

By 1852 he had taken on John Hinks as a partner and they had a factory in Buckingham Street, near Old Snow Hill. They were producing 1.82m gross of pens per year. The company was famous for its "J" pen which was finished in blue or black with an embossed "J".

1860 Patent. John Hinks and George Wells, Birmingham, for an improvement or substitute hook of the ordinary hook-and-eye dress fastening.[2]

1863 Mention of Thomas Hooper, cashier to Hinks, Wells and Co[3]

1867 Partnership dissolved. '...the Partnership between the undersigned, John Hinks and the late George Wells, as Pen Manufacturers, carrying on business at Buckingham-street Steel Pen Works, at Birmingham, under the firm of Hinks, Wells, and Co., was dissolved by the death of the said George Wells, on the 9th day of March, 1867. All debts due to and from the said late firm will be received and paid by the said John Hinks.— Dated this 20th day of December, 1867. John Hinks. Thomas Hooper, William Geo. Wells, Executors of the above-named Geo. Wells.'[4]

1870 Partnership dissolved. '...the Partnership heretofore subsisting between us the underpinned, John Hinks, Thomas Hooper, and William George Wells, of Birmingham, Steel Pen Makers, under the firm of Hinks, Wells, and Co., was this day dissolved, so far as regards the said William George Wells. All debts due to and owing by the said late firm will be received and paid by the said John Hinks and Thomas Hooper, by whom the said business will in future be carried on...'[5]

Thomas Hooper ran the company following the deaths of the founding partners, introducing improvements in the manufacturing process and diversifying into fountain pens and typewriters.

In 1878 the number of workers was halved because of a fall in demand. The company was one of the first to adopt the 9 hour day.

1899 Partnership dissolved. '... the Partnership heretofore subsisting between us the undersigned, Thomas Hooper and Samuel George Moore, carrying on business at the Buckingham-street Steel Pen Works, Buckingham-street, in the city of Birmingham, as Steel Pen and Spring Manufacturers, under the style of Hinks Wells and Co., has been dissolved by mutual consent as from the 31st day of December last. The said business will in future be continued by the said Thomas Hooper under the present style of Hinks Wells and Co...'[6]

c1917 Apparently the company manufactured the 'Flanders Flap' which was designed to prevent mud getting into the barrel of a rifle, and spring mounted so it could be easily opened, or flip out of the way if a soldier accidentally discharged his rifle without opening it.[7] [8]

1920 The company merged with William Mitchell and became part of British Pens.