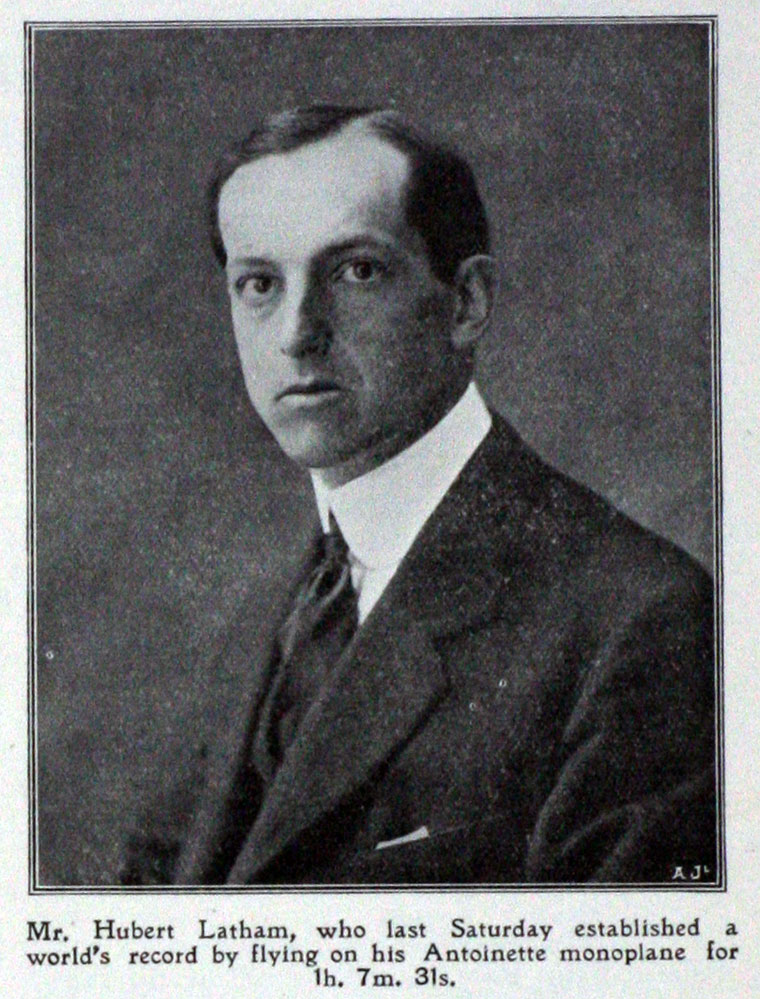 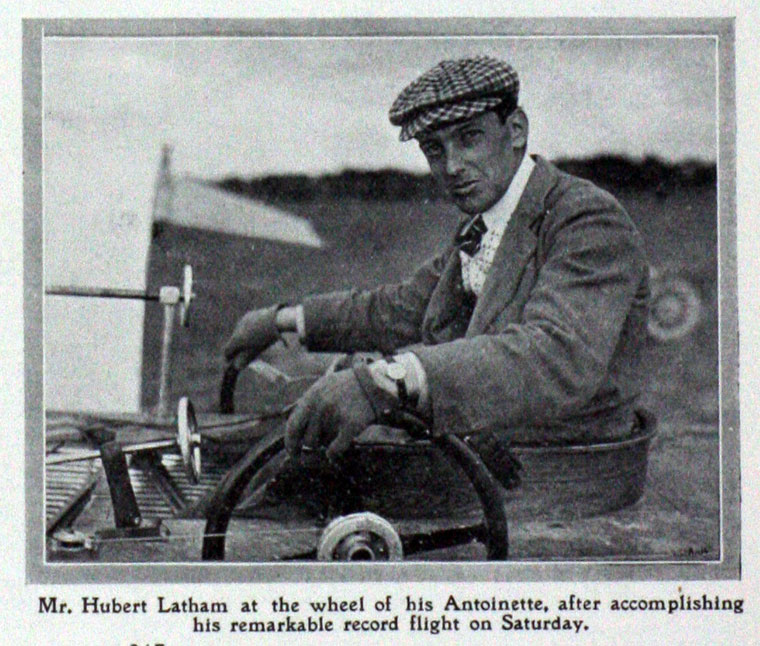 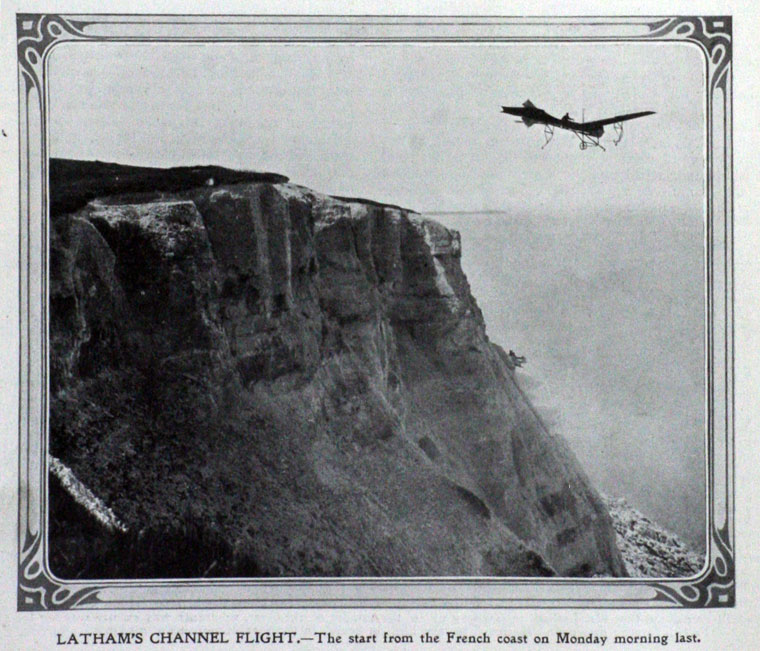 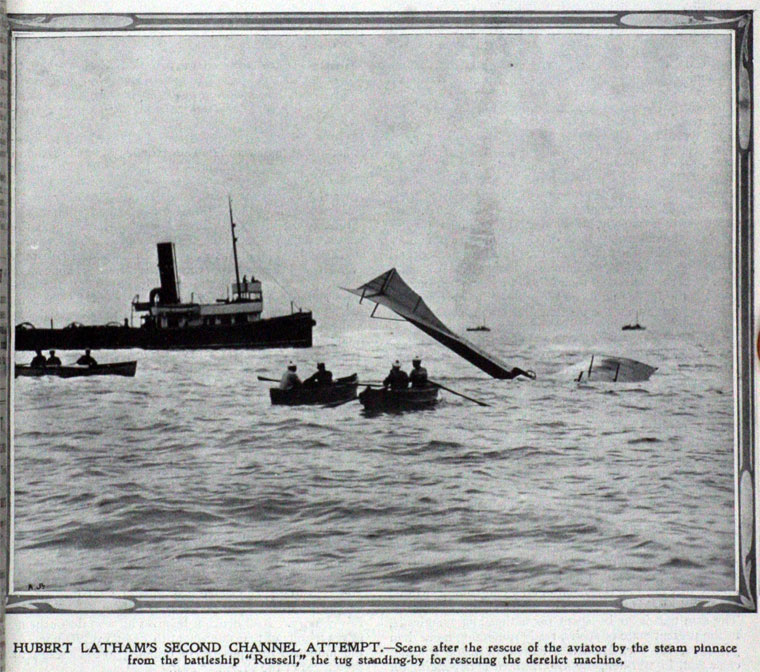 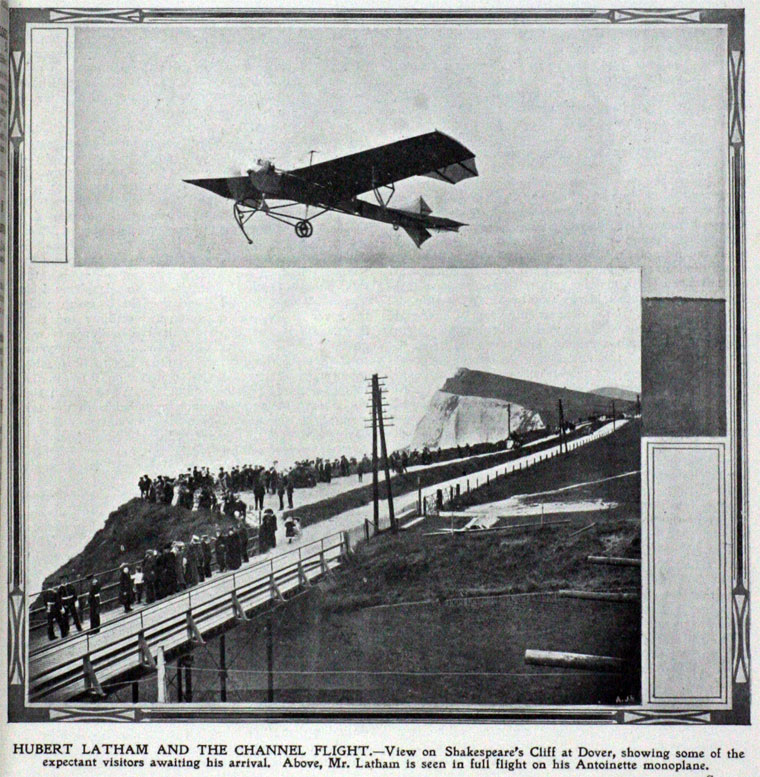 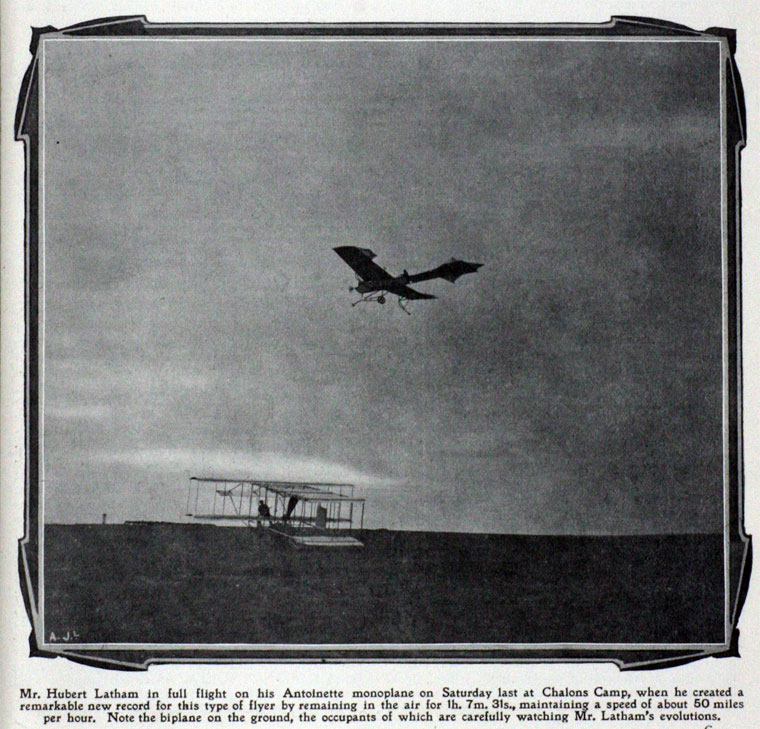 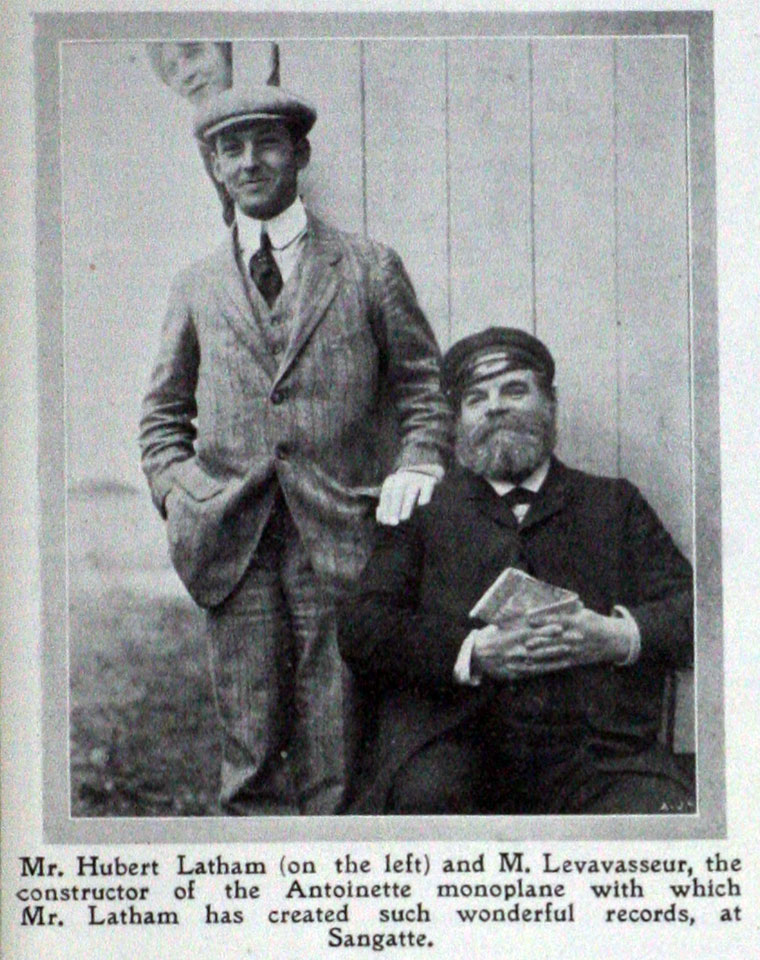 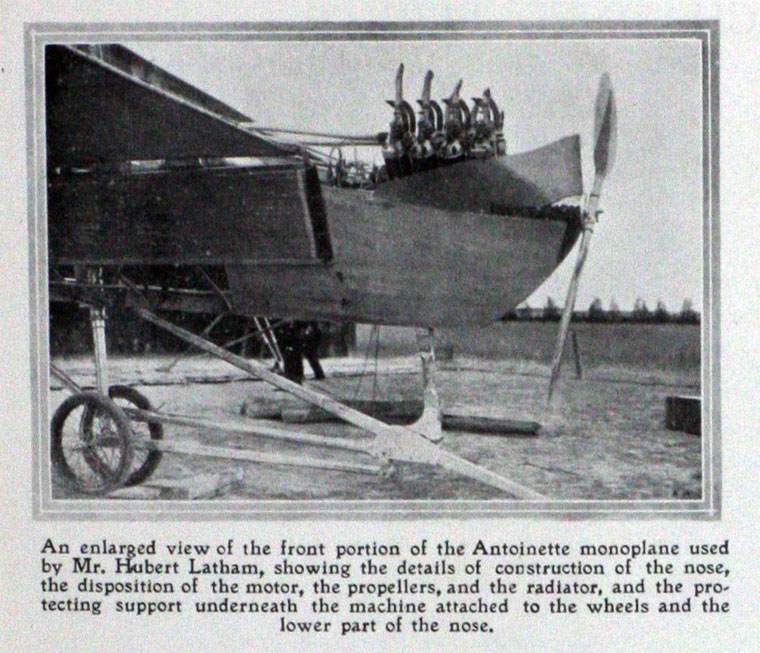 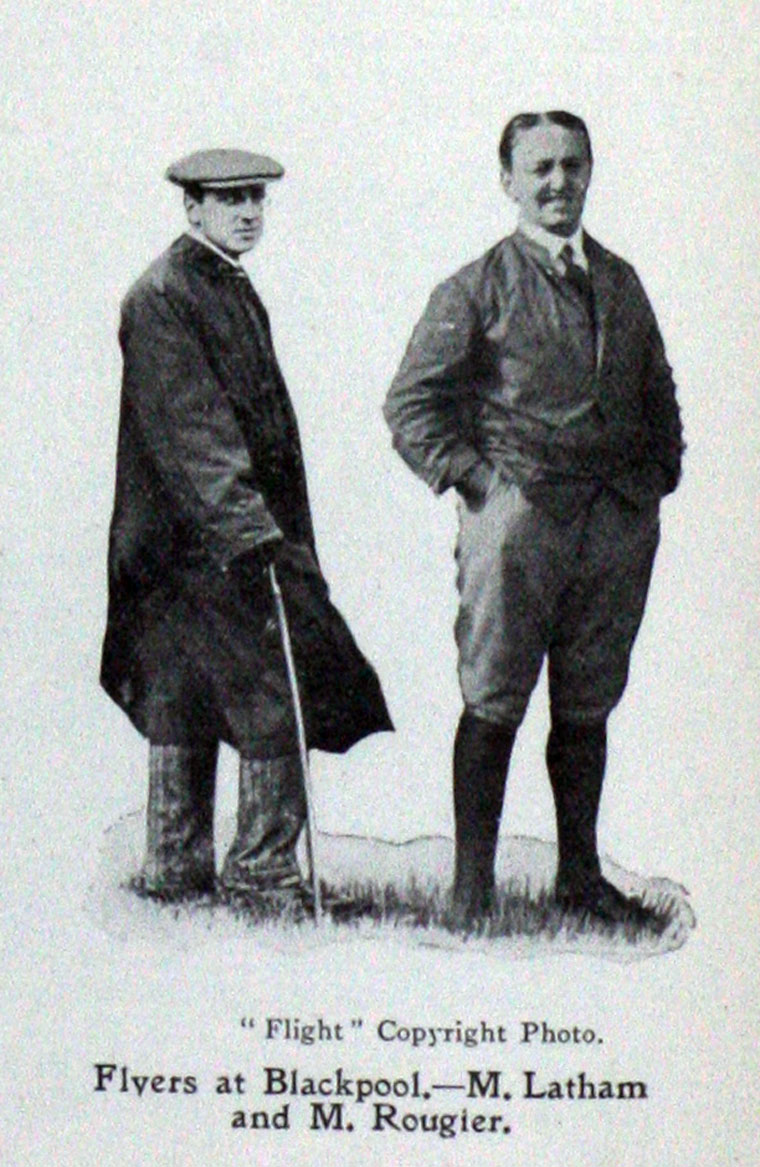 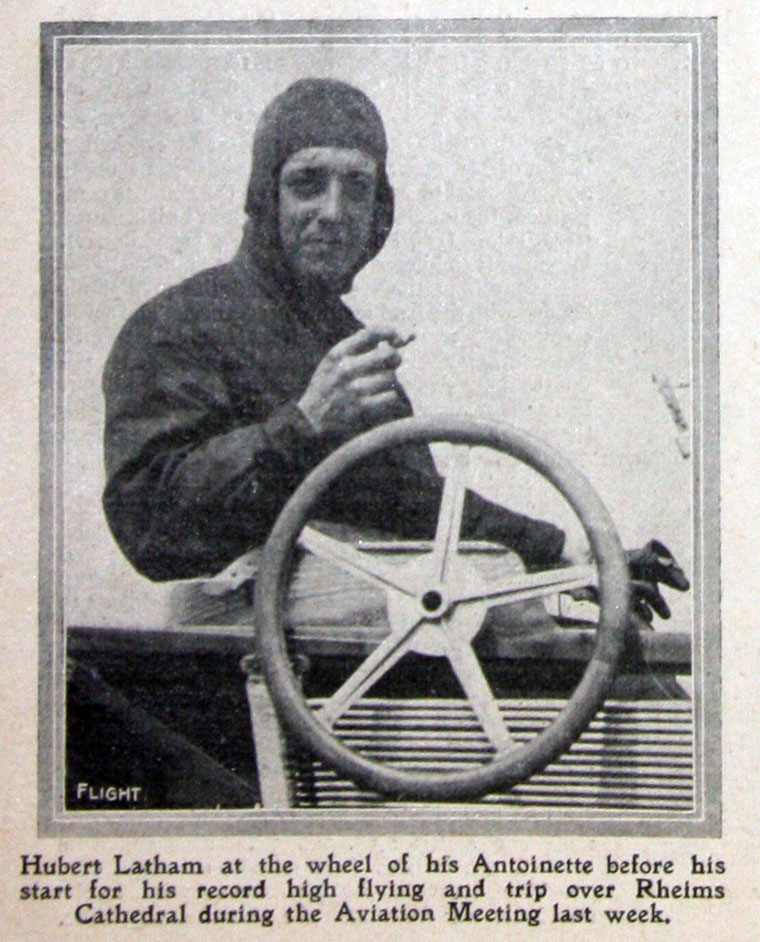 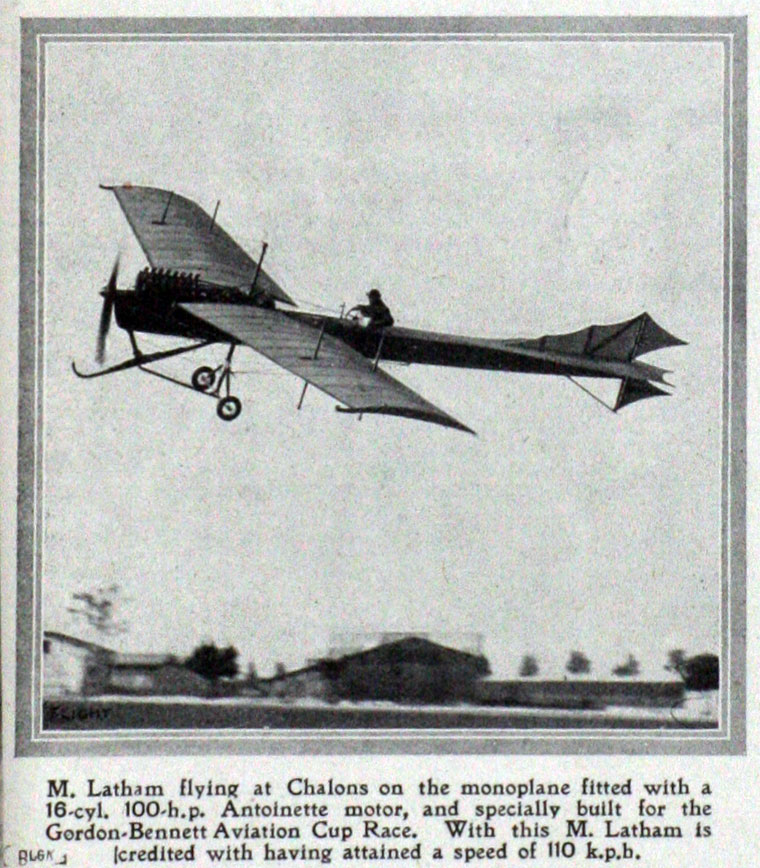 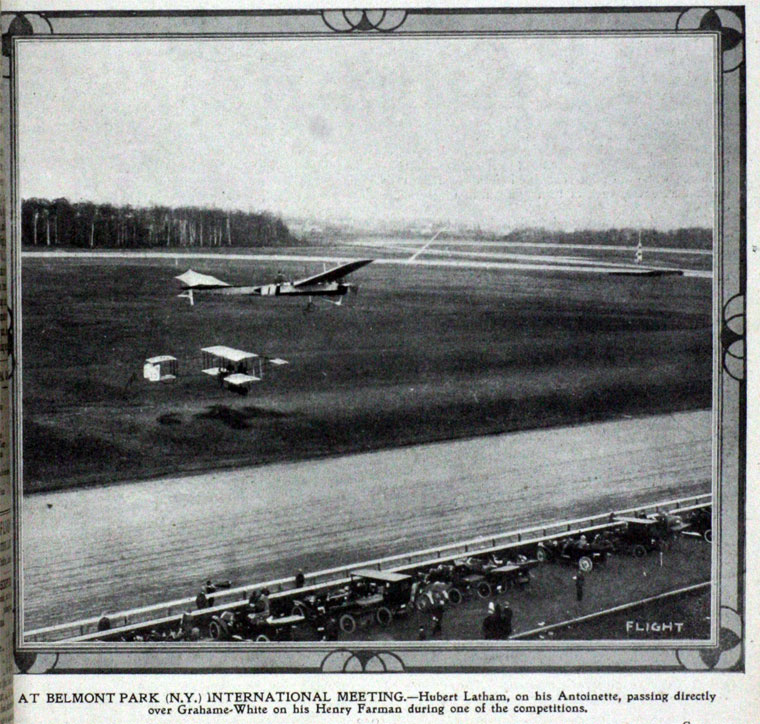 Hubert Latham (1883-1912) Early Anglo-French aviation pioneer. He is credited with being the first individual to land an aeroplane on water during the first of two attempts to cross the English Channel solo.

Latham was a gentleman of inherited wealth. His French mother's family were bankers and his English grandfather's large London family were mercantile traders and merchant bankers.

1905 Latham made a night crossing of the English Channel in a hot-air balloon on 11-12 February 1905 to accompany his cousin, the balloonist Jacques Faure. Latham also competed successfully in motor-yacht racing in Monaco that same year.

He then led an exploratory expedition to Ethiopia (Abyssinia) in 1906/7 and travelled in the Far East in 1908 before returning to France to team up with engineer Leon Levavasseur and businessman Jules Gastambide in 1909 to promote and exploit their Antoinette monoplane. This aeroplane was powered by Levavasseur's engine (used originally in the motor yacht Latham had raced in Monaco) which was also called 'Antoinette' after Gastambide's young daughter.

For the next three years, Latham was to pilot different variants of the Antoinette monoplane to break records, win prizes and gain renown throughout Europe and the United States.

On 19 July 1909, Latham was the first pilot to make a bid to fly across the English Channel to win a £1,000 prize offered by the Daily Mail. The other two competitors were Louis Bleriot bringing his monoplane No 9 and Count Charles de Lambert who showed up with two Wright biplanes.

The Antoinette IV suffered engine failure when almost half-way across and Latham performed the first landing of an aircraft on the sea. Substantial damage to the aircraft was caused during the salvage operation and as Latham waited for a new machine to be made ready before making his next attempt, Louis Blériot announced his intention to make a bid for the prize.

Latham and his rival arranged for a race which was to take place at first light on the morning of July 25, 1909, but Latham's engineer Léon Levavasseur failed to wake either his pilot or his team from their sleep in time to get the Antoinette ready to fly at dawn. His mistake was later rigorously criticised by Latham’s supporters. Louis Bleriot and his machine had been ready to leave at first light and by 4.41am he was in the air and on his way, unchallenged, to make the first successful crossing of the English Channel. The Count de Lambert had damaged one of his Wright Flyers in a test flight and withdrew from the competition.

1909 July 27th. Latham made a second attempt to fly the straits in an Antoinette VII and was within minutes of landing at Dover when engine failure once more brought him down into the sea. His machine was badly damaged but only with cuts to his face, Latham escaped serious injury. The two failures did not damage Latham’s career as a leading aviator, however.

1909 October. Latham participated in the Grande Semaine de L'Aviation de la Champagne at Reims, France, winning the altitude prize in an Antoinette IV at an altitude of 509 ft.

1910 January 7th. In Mourmelon-le-Grand, France, Latham climbed to an altitude of 3,600 ft, more than 2,000 ft more than his previous world record and beyond previous claims of unofficial records.

1909-1911 saw Latham and his Antoinette monoplane playing a dominant role in air shows and competitions, held in France, Britain and the United States, until new developments in other aircraft designs finally overtook this machine’s performance.

1912 June 25th. Latham died when en route to Chad on his way home from a six months' expedition to the French Congo. Some concerns have been raised over the exact cause of his death.

"A FORTNIGHT ago we chronicled two records which had been made by Mr. Hubert Latham and M. Paul Tissandier respectively, and now we have to record a clean sweep made of those two records by Mr. Latham, who, by his latest performance, has placed himself second only to the Wright Brothers, and demonstrated in a wonderful manner the capabilities of that racing craft of the air — the monoplane type of machine.

After making his record flight of 37 mins. on the 22nd ult., Mr. Latham was practising on his machine at Chalons Camp continually, but attempted nothing but short flights until the 4th inst., when he again flew for 37 mins. at a height of between 20 and 25 metres. He displayed the utmost sang-froid while making this little trip, and during the second circuit, while passing over the heads of the spectators, he calmly took his hands off the steering wheel, rolled a cigarette and lighted it, thus creating a new record. He undoubtedly is the first man who has had the audacity to light and smoke a cigarette while in full flight.

On Saturday afternoon last, Mr. Hubert Latham once more brought out his "Antoinette" machine, and after making a couple of runs round the ground to see that everything was in order he rose into the air at 6.40 p.m. Rising steadily, he soon established himself at a height of about 15 metres, which was afterwards increased occasionally to 40 metres. He flew uninterruptedly, although the wind was blowing at a rate of 15 kilometres an hour, for 1h. 7m. 37s., thus setting up a new world's record for monoplane flight and beating all French records for monoplanes or biplanes.

Apart from the Wright Brothers, the records for long flights which have hitherto been made were held by


Needless to say, the flight aroused the very greatest enthusiasm among the officers at the military camp, and by the time the flight was finished a very large crowd of spectators gathered, all wildly excited, despite the fact that the rain poured down during the last 20 mins. As soon as the monoplane came to earth, the young aviator was carried shoulder high to his shed by the crowd, and over one hundred officers at Mourmelon le Grand signed an official statement certifying to the length of the flight.

On Sunday evening last, Mr. Latham followed up this wonderful flight with another splendid one, when, having entered for, he carried off, with remarkable ease, the Ambroise Goupy Prize, which called for a flight of 5 kilometres across country. Starting from the Chalons-Camp at 7.52 p.m., Mr. Latham turned the head of "Antoinette IV" towards Cadenay and flew in a straight line over trees and houses for 5.9 kilometres in 4m. 3s. at a speed of about 50 miles an hour. Turning round without coming to earth, he regained his starting point — another record — without incident, and was wildly cheered by an immense crowd of onlookers, numbering close on 600 people. M. Ernest Zens was the official observer at the start, while M. Paul Tissandier was at the turning point."