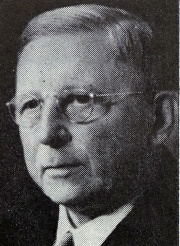 Dr J. A. Ringers, CBE (Hon. Member), who was chief executive for the Zuiderzee project, died recently at the age of 80.

Dr Ringers was a very good friend of Britain. His advice on closing the breaches in the River Trent at Gainsborough and containing the River Welland within its rightful course earned him his CBE in 1947. At the time of the East Coast floods he again made helpful recommendations and, in his own country, he served on the Commission appointed to study methods of protection against excessive floods.

A graduate of the Technical University of Delft, Dr Ringers spent most of his career in the Dutch Department of Public Works, of which he was Director from 1930 to 1935. In this work he was responsible for the building of the sash-lock at Ijmiuden, the biggest in the world, and for the great barrage across the Zuiderzee. After his liberation from prison camp in 1945, he was appointed Minister for Public Works and Reconstruction, a difficult position which he occupied with distinction for two years. In 1947 he became an adviser to the Royal Dutch Shell Co., retiring in 1958.

He received many honours in his own country and he was particularly associated with the Royal Netherlands Institute of Engineers of which he was an Honorary Member and a Past-President. During our Summer Meeting in Holland in 1954 he was indeed this Institution's guide, philosopher and friend, and it is in this capacity that we mourn his passing.