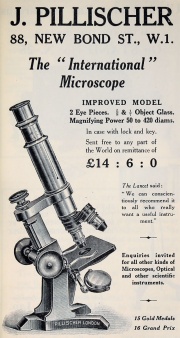 Moritz, Jacob, and Edward Pillischer were instrument makers. Jacob was the nephew of Moritz, and also the father of Edward.

1847 Moritz married Babete Cohen in London in Februarry, in The Great Synagogue. They had six children: five daughters and a son, who seems to have died in early chilhood.

1870 Moritz's wife had died in March, of what was probably a ruptured appendix.

1872 This situation brought Moritz's nephew, Jacob, from Budapest, to marry a daughter, Rose, in July. Jacob was born in O'Becse, Hungary, in the County of Bacs Bodrogh on 1 December, 1838.

Jacob had 3 children - Edward the eldest, was born in the third quarter of 1873. There was a brother Leopold and the youngest, a sister, Bertha.

1887 Jacob took over the business and later called it Jacob Pillischer and Sons.

1893 Mortiz died in March, probably in Brighton, where he had retired with one of his daughters who did not marry, all the others did.

Only Leo married, in 1904, to Janka Grunberger. Something must have happened to her because any records that mention Leo refer to him as him single.

1910 Jacob applied for British citizenship in February. He wanted a British passport to go to Argentina to defend his trade mark. There were several firms of opticians and scientific instrument makers there, selling clinical thermometers with Jacob Pillischer's name, trade mark; and the Kew Observatory Testing Mark, when these instruments were, in fact, manufactured in Germany. His application indicated that he was the son of Ignacz and Rosa Pillischer, both now (1910) deceased. [Moritz was brother of Ignacz]. His residential address was 274 Elgin Avenue, Maida Hill (January 1883 - August 1908); and 9 Carlton Hill, St John's Wood (August 1908 - Present). He listed three children, and requested British Nationality for them too: Edward John Pillischer, age 37; Leopold James Pillischer, age 35 [1933 directory lists him as Cigar Merchant, 8 New Cavendish Street, London, W1]; Bertha Pillischer, age 33, residing with him. He made four trips overseas in 1910: 6 weeks to Argentina; 3 business trips to Brussels (each less than 2 weeks) for the Exhibition there.

1911 'Jacob became a British citizen. He was booked to travel on the Royal Mail Steam Ship "Amazon" on 11th March. The Home Office were very obstructive, and said he could not get naturalisation if he was going abroad. After legal representation, they finally approved his naturalisation on 25 April, and he received his 5-year British Passport on 23 May. He sailed in June 1911.

Certificates from pre-WWI show the business exhibiting throughout Europe. Edward seems to have lived in both Paris and London. The family home was in the St. John's Wood area.

1929 British Industries Fair Advert for The 'International' Microscope. Manufacturers of Microscopes and Accessories, Optical and other Scientific Instruments. (Scientific Section - Stand No. N.7) [1]