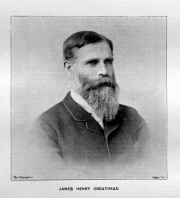 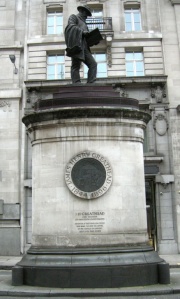 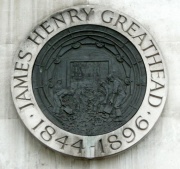 James Henry Greathead (1844-1896) was an engineer renowned for his work on the London Underground railway.

1844 August 6th. Born in Grahamstown, South Africa of English descent as Greathead's grandfather had emigrated to South Africa in 1820.

He was educated at St Andrew's College, Grahamstown, and the Diocesan College private school in Cape Town.

1859 After migrating to England, he completed his education from 1859 to 1863 at the Westbourne Collegiate School, Westbourne Grove.

He returned briefly to South Africa before finally moving to London in 1864 to serve a three-year pupillage under the civil engineer Peter W. Barlow, from whom he became acquainted with the shield system of tunnelling.

c. 1867 He spent some time as assistant engineer on the Midland Railway between Bedford and London (working with Barlow's brother, William Henry Barlow).

1869 rejoined Barlow and they began work on designs for the Tower Subway, only the second tunnel to be driven under the river Thames in central London. Barlow was the engineer for the tunnel and Greathead was in charge of the actual drive. The tunneling shield for driving the Tower Subway, while designed by Greathead, was inspired by Barlow's ideas for a circular tunneling shield which he had patented in 1864 and 1868. The shield was named the Barlow-Greathead shield and consisted of an iron cylinder 7 ft 3 in in diameter fitted with screw jacks which enabled it to be jacked forward. In use, the shield was inched forward as the working face was excavated, while behind it a permanent tunnel lining of cast iron segments was fitted into place, itself an important innovation. [1]

Greathead patented many of his improvements including the use of compressed air and forward propulsion by hydraulic jacks, both of which are now standard features of tunnel construction.

1873 Greathead became resident engineer on the Hammersmith extension railway and the Richmond extension of the Metropolitan District Railway, a post which he held for four years.

After this he assisted in the preparation of the Regents Canal Railway (1880), the Metropolitan Outer Circle Railway (1881), a new London-Eastbourne line (1883) and in various light railways in Ireland (1884).

1884 Greathead was engaged as engineer on the London (City) & Southwark Subway, later the City & South London Railway (and now part of the Northern Line) which was, when it opened in 1890, the world's first underground electric railway.

1888 he became joint engineer with Sir Douglas Fox on the Liverpool Overhead Railway and also worked with W. R. Galbraith on the Waterloo and City Railway.

He was also a consultant in the construction of the Blackwall Tunnel which was dug using a pneumatic shield.

His final work was on the Central London Railway with Sir John Fowler and Sir Benjamin Baker.

1896 October 21st. Died and is buried in West Norwood Cemetery

In 1859 he came to England for the completion of his education; and in 1864 commenced a pupilage of three years under the late Mr. Peter W. Barlow.

On its expiration, he was engaged for a year as an assistant engineer upon the construction of the Midland Railway extension from Bedford to London, under Mr. W. H. Barlow and Mr. C. B. Baker.

In 1869 he was entrusted with the construction of the Tower Subway under the river Thames; and for this work he adopted a cylindrical wrought-iron shield, forced forwards by six powerful screws as the material was excavated in front of it. The subway was completed in the same year; and in 1870 he began to practise on his own account as consulting engineer.

In 1873 and for the four following years be acted as resident engineer on the Hammersmith Extension Railway and the Richmond Extension of the Metropolitan District Railway.

He assisted in the preparations for several other projects, namely the Regent's Canal Railway in 1880, the Dagenham Dock and the Metropolitan Outer Circle Railway in 1881, a new line between London and Eastbourne in 1883, and various Irish light railways in 1884.

In the latter year he was engaged on the preparation of the bill for the City and South London Railway. The work was commenced in October 1886, and the line was opened in November 1890 by the Prince of Wales. During the construction of this line compressed-air was employed to prevent the inrush of water; and the success of this plan led to its adoption in other similar enterprises in which he was engaged.

He invented apparatus for the application of water to excavate in front of the shield, and for injecting cement-grout behind the lining of the tunnel.

He was engaged as joint engineer with Mr. W. R. Galbraith on the Waterloo and City Railway; and on the Central London Railway he was associated with Sir John Fowler and Sir Benjamin Baker.

He did not live to see the completion of these undertakings, his death taking place at Streatham on 21st October 1896, at the age of fifty-two.

JAMES HENRY GREATHEAD died at his residence, Streatham, on October 21, 1896. He was a member of the Council of the Institution of Civil Engineers, and had carried out many extensive engineering works; but he will be chiefly remembered as the pioneer in that system of tunnelling which bears his name, has revolutionised the method of tunnelling hitherto adopted in large cities, and has practically solved the problem of rapid transit in London.

The City and South London Railway, which was one of the first to be constructed by Mr. Greathead, has been in operation about five years. The Central London and the Waterloo and City Railways are in course of construction, and others are authorised. These tunnels would not have been practicable had it not been for the very ingenious device known as the Greathead shield, which enables tunnels to be driven with safety and economy underneath buildings of all kinds without disturbance, and under rivers without danger to the workmen. This shield, together with the Greathead grouting machine, will always be associated with his name. These appliances have been used in Glasgow, Edinburgh, Liverpool, and elsewhere in the British Isles, as well as in Canada, Australia, and other parts of the world.

Mr. Greathead was elected a member of the Iron and Steel Institute in 1892, in which year lie contributed to the Proceedings of the Institute an important paper on the Liverpool Overhead Railway.