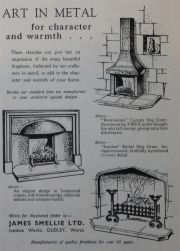 1893 James Smellie purchased a partnership with a manufacturer in Dudley, whose cheap iron and brass rail fenders had been factored and which he had sold. They engaged a first-class draughtsman and pattern maker, who was a very skilled craftsman, and made up a number of new patterns for expensive Black and Copper Hearth Suites. They also began to make all Brass, Copper, Pierced and Forged Hearth Suites, also all kinds of Art Metal Goods, Grates and Fire Places.

James Smellie did the whole of the travelling from Bristol to Inverness, and opened over two thousand new accounts. During three and a half years the business had increased until they were the largest manufacturers of Hearth Suites in the UK. He then brought his commercial travelling to a close.

1904 On 8 January the partnership was dissolved on mutual friendly terms, and he not only purchased the works, property and cottages which they owned, the patterns, stock-in-trade, trade marks, book debts, trade name and all the assets, but he also paid a very large sum for the goodwill of the business, and left his late partner with a free hand, and no restrictions, so far as competition was concerned.

1905 The first year was one of the most prosperous the business ever had.

1906 The business was turned into a Private Limited Company with 30,000 Fully-paid Ordinary One Pound Shares, all of which were held by members of his family. At the time, there were approximately 3,500 ledger accounts.

A polished steel "Ivanhoe" fireplace was supplied to H.R.H. Princess Mary. “Ivanhoe” Metal Work was supplied for Balmoral Castle and many of the old historical Castles and Houses in all parts of the country. They reproduced old metal goods of all kinds, and made and supplied all the brass tomb railing for the Sultan of Morocco’s grave. Ivanhoe Grates and Hearth Suites were fitted in most of the largest hotels all over the country.