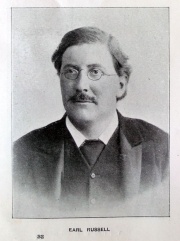 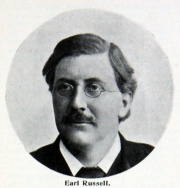 Known as Frank Russell, he was the elder surviving son of Viscount Amberley and his wife the Honourable Katharine (Kate) Stanley, and was raised by his paternal grandparents after his unconventional parents both died young. He was the grandson of former prime minister, John Russell, 1st Earl Russell and elder brother of philosopher Bertrand Russell.

Trained at Plenty and Son, Newbury

Building on his childhood interests in science and engineering, and experience gained as an adolescent when he helped electrify Hatfield House, he worked for the electrical contracting business of the electrical engineer James Swinburne, Swinburne and Co of Teddington.

1889 Partner in Swinburne and Co

1890 Associate member of the Institution of Electrical Engineers

1892 Left Swinburne and established his own company J. Russell and Co

The company had offices in Queen Victoria Street, works at Walham Green, and a branch in Cambridge

1895 Became a member of the Institution of Electrical Engineers

After three years he abandoned the business at considerable financial loss.

For many years he was chairman of the marine engineering firm Plenty and Co of Newbury, and was associated with other businesses.

He was married three timesand despite his landmark achievements in other respects, this Earl Russell is most famous for being tried for bigamy in 1901. Henceforth, he was known to Edwardian society as the "Wicked Earl".

1931 Died in Marseille where he was cremated and his ashes scattered on the Sussex Downs.

RUSSELL, EARL.- Born in 1865, and educated at Winchester and Balliol College, Oxford, Earl Russell is by profession an electrician. He is a member of the Institute of Electrical Engineers, of the Royal Institution. His road experiences began as a cyclist, amongst his other pastimes being yachting. He started automobilism with a Benz car five years ago, driving since a Panhard with Napier engines, which originally belonged to Mr. Edge, also an 8 h.p. Haynes Apperson American car. His next car, to be delivered shortly, is to be a four-cylinder 12 h.p. Napier. Earl Russell is one of the early Life Members of the Club.