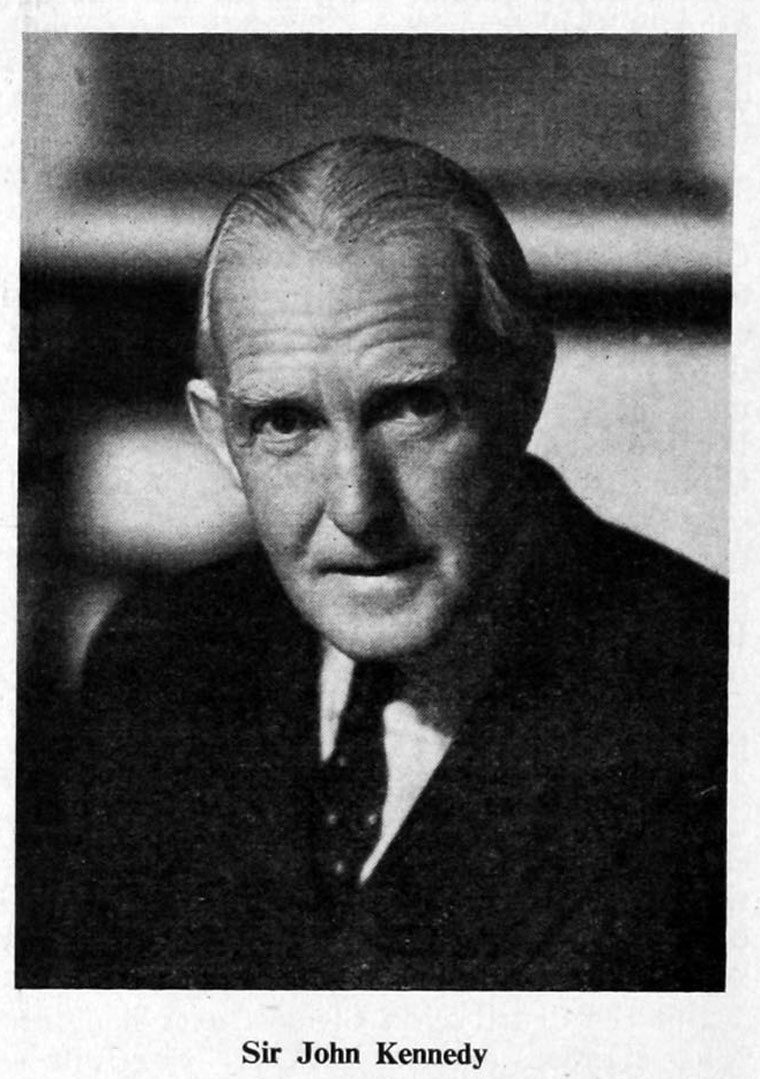 ENGINEERS, particularly those concerned with the electricity supply industry, will have learned with regret that Sir John Kennedy, a former chairman of the Electricity Commissioners, died, at the age of seventy-four, at his home in Shalford, Surrey, on Tuesday, August 31st.

John Macfarlane Kennedy, son of the late Sir Alexander Kennedy, LL.D., F.R.S., was born in London on October 12, 1879, and was a pupil at University College School.

On leaving school he studied for a year at Zurich Polytechnic before starting his practical training by serving as a pupil with Richard Moreland and Sons from 1896 to 1897.

He then went up to Trinity College, Cambridge, where he took the Mechanical Science Tripos. Continuing his practical training, he was indentured with the Rugby firm of Willans and Robinson from 1900 to 1901, when he went to Germany to spend a· year with the firm of Siemens and Halske, in Berlin, where he interested himself particularly in electric traction.

In 1902 he started as an assistant with Kennedy and Jenkin, the firm of consulting engineers that is now known as Kennedy and Donkin. There, for the next twelve years, he was mainly concerned with a number of electric traction schemes, starting with the reconstruction of the London County Council tramways, on the conduit system, and with the Hammersmith and City Railway. He also worked on the conversion of the Edinburgh tramways from rope haulage to electric traction.

Later he carried out preliminary design studies for electrification of the suburban lines of the London and North-Western Railway and the western section of what is now the Southern, but, although construction started before 1914, completion of these schemes had to be deferred until after the 1914-1918 war.

From 1916 to 1918 he served as superintendent of the Government rolling mills at Southampton and for his wartime services he was made an O.B.E. in 1919.

On rejoining Messrs. Kennedy and Donkin after the war he became increasingly interested in the problems of electricity supply and he soon concluded that the shortcomings of the electricity supply industry were not corrected by the post-war Electricity Acts.

As a result of his studies in 1922 he submitted proposals to the Electricity Commissioners for the reorganisation of electricity supply in Great Britain and later he compiled a report on the same subject for the Ministry of Transport.

After the passage of the 1926 Electricity Act he collected, for the Electricity Commissioner, the technical and financial information which formed the basis for the regional electricity schemes of the Central Electricity Board; for the next six years he was closely associated with his firm's work for the Board in the design and construction of many of the regions of the British grid.

During this time Sir John also designed, on behalf of the Government of Northern Ireland, an electricity grid and distribution scheme for the whole of that country outside the city limits of Belfast and Londonderry.

He devised a similar scheme for the Isle of Man, whereby supplies of power generated in Douglas and surplus to its requirements, would be purchased by an Electricity Board who would be responsible for distributing and selling electricity throughout the island.

In 1934 he was appointed an Electricity Commissioner an office which enabled him to help in shaping the first part of the co-ordination of electricity supply.

He was deputy chairman of the Electricity Commissioners from 1938 until 1947, when he became chairman for the last year of the Commissioners' existence. By then he had seen the first function of a co-ordinated electricity supply system that of interconnected generation and transmission established in Britain; he had seen this integrated system of generation and transmission withstand the emergency demands of wartime, and he had had the satisfaction of knowing that those demands could not have been met but for the economy in generating plant that was the essence of the grid system. By then distribution was the only function that remained outside the orbit of the co-ordinated electricity supply system.

But the distribution of electricity had for long claimed a great deal of Sir John's attention, and this topic was prominent in his inaugural address as president of the Institution of Electrical Engineers in 1935. In this address, he emphasised the need to reduce the cost of electricity. He sought to show that any further reduction in operating costs due to co-ordination of generation must be small compared with those that had already been achieved; for further progress one must look to the distribution side to effect the necessary economies.

Sir John's optimism and confidence in the future of the electricity supply industry was clearly declared in the final portion of his address in 1935. There he forecast that long before 1960 "the industry should be able to account for more than 10,000,000 domestic consumers"; this figure was, in fact, reached before "vesting day", He went on to suggest "47,000 million units [of electricity] as a goal to be aimed at in the next ten to fifteen years at the outside." In the event the sales of electricity reached more than 46,500 million units in 1950-51. Sir John's goal might well have been achieved much earlier but for the fact that his hopes for extensive railway electrification were not realised.

After the nationalisation of the electricity supply industry, which was followed by the winding up of the Electricity Commissioners in 1948, Sir John accepted an invitation from the Uganda Electricity Board to become its London director. In this capacity he paid a number of visits to Uganda during the development of the Owen Falls hydro-electric scheme.

Because of ill health he retired from the Board in 1952, but he lived to see the inauguration of the Owen Falls scheme, which was opened by Her Majesty the Queen earlier this year. On his retirement from the Board he accepted a post as consultant to Messrs. Kennedy and Donkin.