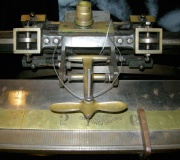 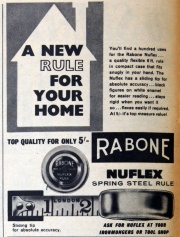 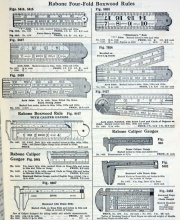 1784 Company has its origins in Birmingham, as rule and tool makers. The business was continued by John Rabone and his (John's) grandson, Eric Rabone. It worked under the name of John Rabone and Sons c1784-1953, becoming a public company in 1948. [1]

1835 Partnership dissolved. '...the Partnership heretofore subsisting between us the undersigned, John Rabone and Richard Mason, of Birmingham, in the County of Warwick, as Barometer and Thermometer-Makers, &c. was dissolved by mutual consent on the 25th day of March 1834; all debts owing to and by the said Partnership firm will be received and paid by the said John Rabone by whom the above trades will in future be carried on...'[2]

1851 Partnership change. '...the Partnership formerly subsisting between the undersigned, John Rabone, John Rabone the younger, and William Henry Rabone as Rule Manufacturers, carrying on business at Saint Paul's-square, in Birmingham, was dissolved as regards the, said William Henry Rabone, on the 24th day of June 1848. All debts due and owing by the said partnership will be received and paid by the continuing partners, by whom the trade has since the dissolution been carried on...'[3]

1871 The company moved to Hockley Abbey in Birmingham.

1872 The company's newly patented spirit levels and rules were exhibited in Moscow, Vienna, Sydney and Melbourne.

1877 Arthur John Rabone, another of John Junior's sons joined the business, after which the company became John Rabone and Sons.

1962 Control of the business remained in the family until this time.

1963 The company merged with James Chesterman and Co, toolmakers of Sheffield, and the name was changed to Rabone Chesterman.