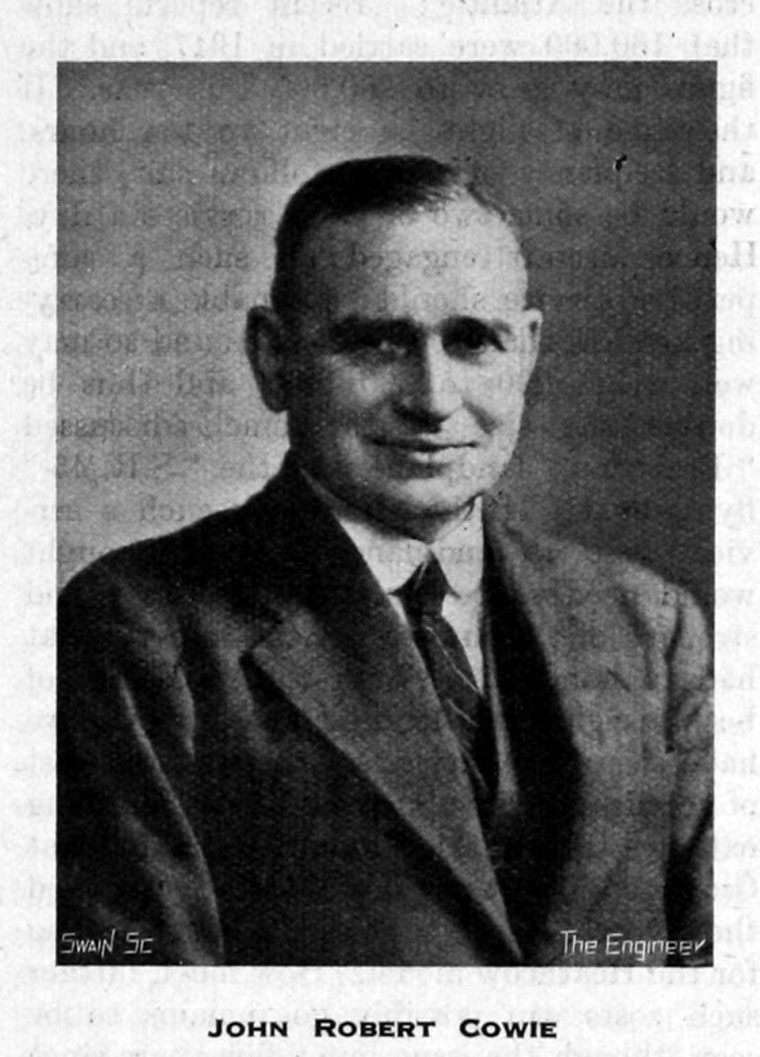 "WE regret to record the death, at the age of sixty-six, of John Robert Cowie, A.M.I. Mech. E., A.M.I.E.E., at his home in Croydon, on Thursday, August 5th, after a protracted illness. Mr. Cowie, who was an authority on high-tension switchgear and a well-known, well-loved figure in the electrical industry, was, up to the time of his death, southern area manager of A. Reyrolle and Co., Ltd.

He was born in Glasgow on March 15, 1882, and was educated privately in South Africa and, later, at George Watson's College, Edinburgh . Having developed a keen interest in electrical engineering, he began his technical training at the Heriot Watt College, Edinburgh, and at Glasgow Technical College. After serving an apprenticeship with David Thompson and Co., Ltd., he broadened his engineering experience with the British Electric Plant Company, Ltd., and later, with William Beardmore and Co., Ltd., as engineer-in-charge from 1906- 07.

In 1907 came the first direct association with electricity supply, for in that year Mr. Cowie joined the staff of the Glasgow Corporation Electricity Department. Starting as substation attendant, his tenacity earned him rapid advancement. Within ten years he became assistant engineer and, under the direction of the late Mr. W. W. Lackie and Sir (then Mr.) Archibald Page, he was responsible for redesigning the high-voltage network associated with Dalmarnock power station....Read More"

"JOHN ROBERT COWIE was well known in electrical engineering circles with which he was associated during the whole of his professional career. He was an authority on high-tension switch gear and had served the Electrical Research Association as a member of the standing committee on switch and control gear since its inception in 1921.

He was educated at the Heriot Watt College, Edinburgh, and served a six years' apprenticeship, beginning in 1899, with Messrs. David Thomson, Ltd., of the same city. After gaining further experience with the British Electric Plant Company, Ltd., of Alloa, and with Messrs. William Beardmore and Company, Ltd., of Dalmuir, where he was in charge of electrical equipment, he joined the staff of the Glasgow Corporation electricity department in 1907 as substation shift engineer. In the same year he was made personal assistant to the resident engineer and eventually he became assistant engineer, in which capacity he was responsible for redesigning the high voltage system at Dalmarnock Power Station.

In 1920 he came to London to inaugurate a new office for Messrs. A. Reyrolle and Company, Ltd., in whose service he continued as southern area manager until his death, which occurred at Croydon on 5th August 1948, in his sixty-seventh year. During these twenty-eight years Mr. Cowie was directly responsible for all the company's installations (including specialized mining switchgear) south of Birmingham. He was elected a Graduate of the Institution in 1906 and was transferred to Associate Membership in 1910. He was also an Associate Member of the Institution of Electrical Engineers and had served on the Council of that body from 1919 to 1922. In addition he was a past-president of the Association of Mining and Mechanical Engineers, and was elected to the chair of the Council of the British Electrical and Allied Industries Research Association in February 1948."