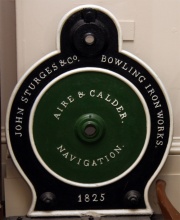 1825. Aire and Calder Navigation. Exhibit at the Hull Maritime Museum. 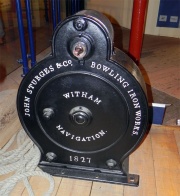 The Bowling Ironworks was set up in 1788, as an offshoot of the Fall Ings works at Wakefield – 2 of the partners being John Sturges and Richard Paley, but it was not worked profitably at that stage.

1804 Advertisement: 'PATENT VERTICAL Boring Machine. MESSRS. JOHN STURGES, and Co. of Bowling Iron Works, near Bradford, Yorkshire, the Proprietors of BILLINGSLEY’S Patent Machine, for Boring Large Cylinders, Pumps, &c. vertically, Are ready to contract with Iron Founders and Others, for the Privilege of erecting Machines upon the Patent Principle. The Proprietors can with great Confidence recommend their Patent Machine to the Attention of the Public, both from its Accuracy and Expedition in boring, having for some Time had one of them at Work, which by Application to them may at any Time be inspected.
John Sturges and Co. are now making Bar Iron of a superior Quality, which may be used for all the Purposes to which the best Foreign Iron is applied, and have at all times an Assortment of Bar, Rod and Plate Iron, at their Works at Bowling and at Holbeck, near Leeds.
J. Sturges and Co. undertake the making of Steam Engines and Boilers of all Dimensions, upon the usual Terms, under the Direction of their Engineer, Mr. Michael BILLINGSLEY.'[1]

In 1805, John Sturges, in the name of the Bowling Iron Company, stepped in to extract minerals.

A new partnership at Bowling was made in 1804, and during the period of the war with France the firm broke into the lucrative trade in iron guns. Trading was carried on under the name of John Sturges & Co from 1804 to 1849.

c.1820 Provided the ironwork for the new naval hospital at Port Royal, Jamaica. [2]