Difference between revisions of "John Winwood" 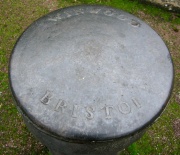 1788 Advertisement: 'IRON FOUNDERY, BRISTOL. The Iron Foundery Business carried on for many years past in this city, under the firm of John Jones and Co. in consequence of the late decease of the said John Jones, is now carried on in all its branches by JOHN WINWOOD, the surviving partner who most respectfully solicits a continuance of the favours of the friends of the late partnership, and also those of the public in general.' [1]

1791 Hornblower and Winwood's new invented steam engine set to work at Croft Mine, Illogan 'and is superior to anything before' [2]

1792 Advertisement: 'BRISTOL - WANTED, to go to Jamaica, a Single Young Man, who is capable of working a STEAM ENGINE, and of keeping it in repair. Such a one will meet with good encouragement, by having a good salary, besides meat, drink, washing, and lodging, found him by his employer.— —For further particulars apply to JOHN WINWOOD, at the Iron-Foundery in Cheese-lane.'[3]

1826 Made engines for the vessel 'Wye'. Believed to have been the first locally-made marine engines [7]. The same source notes that the Bristol Iron Foundry in Cheese Lane was said in advertisements to have been founded in 1764, and further that marine engines continued to be built when the firm became Winwood, Bush and Beddoes in 1836; Bush and Beddoe in 1838; T. and E. Bush in 1846; Bush and De Soyres in 1869

1833: 'TO ROAD-MAKERS AND OTHERS. TO BE SOLD BY PRIVATE CONTRACT, A Large IRON ROLLER, as good as new, 5 feet in diameter, and 5½ feet in width. The Cylinder is in three parts, the weight three tons and seven hundred. It is so easy of draught, that on level ground three able horses can work it; made at a cost of Messrs. Wenwood, of Bristol, [assumed to be Winwood] under the superintendance of a celebrated and scientific Road Surveyor, on a plan entirely new.
The Cylinder is so constructed as to admit of additional weight.
For price and particulars apply, (if by letter post-paid) to Mr. THOMAS SYMES, solicitor, Bridgewater; or to Mr. GRANGER, of the same place, General Surveyor of the Bridgewater Turnpike Roads. Dated 20th August, 1833.'[9]

1840 Iron founders and makers of steam engines, various kinds of machinery, and cannon [12]