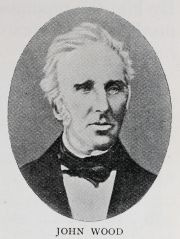 The following account of the career of John Wood, the builder of the PS Comet, appeared at his death in the Glasgow Herald of 24th December, 1860:

“Mr John Wood was born on the 10th of October, 1788, and learnt the elements of his profession from his father, who was also a shipbuilder in Port-Glasgow, and a man of much talent and ingenuity. About 1806 he was placed under Mr. Brocklebank, shipbuilder in Lancaster, for ten years. At this time Lancaster enjoyed a considerable reputation for shipbuilding, and it was with the view of profiting by a superior knowledge there to be acquired that Mr. Wood served a part of his apprenticeship at that place. In 1811, on his father’s death, Mr. Wood assumed the responsibilities of the building yard at Port-Glasgow, having for a year or two previously been actively engaged in the management of the work. One of his first engagements was the construction of the steamer "Comet" for Mr. Henry Bell, which had been contracted for by his father. He subsequently built an immense number of river steamers, and steamers for deep sea navigation. One of the most celebrated of the latter at the time, and in every way successful (though the first of sea-going’ steamers), was the "James Watt,2[1] which he built in conjunction with his brother, Mr. Charles Wood, to open a steam communication between London and Edinburgh. In the middle portion of his career he was chiefly engaged in building deep-sea and ocean steamers. By him the reputation of the Clyde as a field of production of steam vessels was raised highest pitch, and other Clyde firms participated in the reputation thus brought to their doors. Of late years Mr. Wood has built few wooden ships, partly from the fact of these having fallen much into disuse, and partly from his having become a partner of his relative, Mr. John Reid, shipbuilder, Port-Glasgow, and, as such, aiding in raising the firm of Messrs. John Reid and Co. to the high reputation it now enjoys. From this firm he retired some years ago.

“Mr. Wood’s brother, Mr. Charles Wood, who died a few years ago, was for some time associated with him in business, and he, too, was a very remarkable man, but perhaps too far in advance of the age in which he lived. Among his other designs he projected and constructed the great ship-rafts "Columbus" and "Baron of Renfrew" as a new expedient for bringing timber to this country. Although the latter of these was lost, the soundness of the principle may be held as established from the fact that the former reached this country in safety. There can be no doubt that these brothers have, by their talents and other gifts, conferred honour upon their profession, and have added to the lustre of their native land.”

To this may be added an interesting anecdote of Wood’s boyhood, furnished to the present writer by Mr. Matthew Blackwood, Port-Glasgow.

“His father,” Mr. Blackwood says, “had got a large chest of tea sent him, and he begged hard of his father to get the chest, which he made into a boat, and sailed in it, on one of the burns at Bishopton. The first night he was out he was watched by the natives of the place, and when he came ashore in his boat, lifted it, and put it on his head, to carry it home, the people fled to their homes, thinking he was a ‘kelpie.’ I expect this would be the first attempt at shipbuilding in the Wood family.”