Difference between revisions of "Joseph Bazalgette" 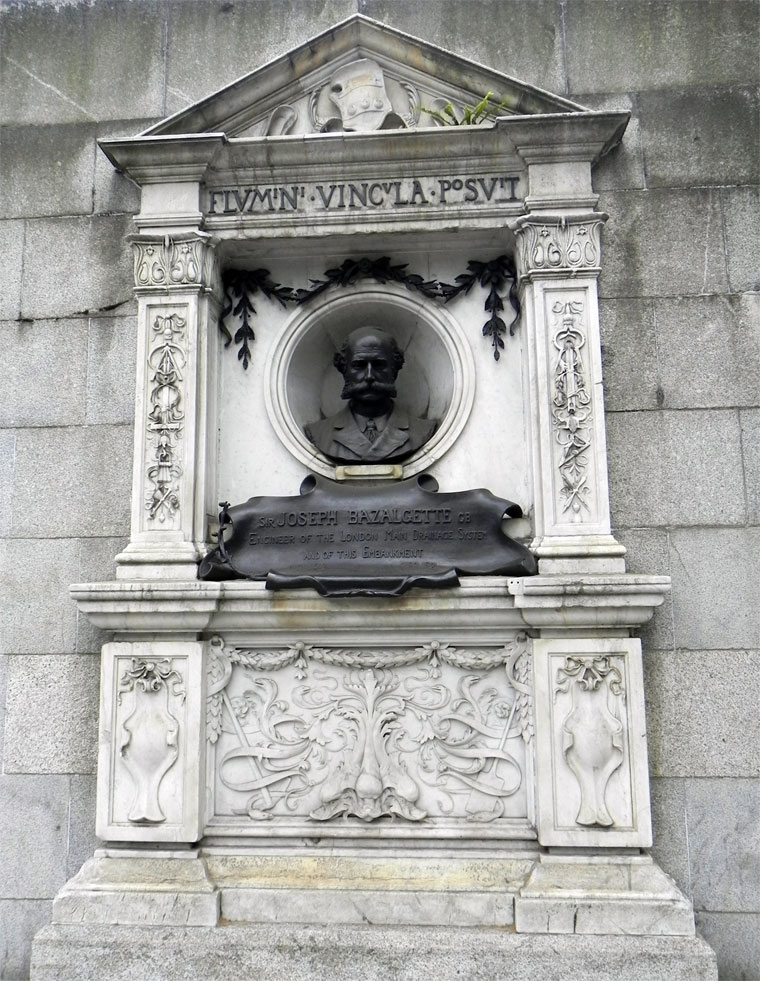 Monument on the Embankment. 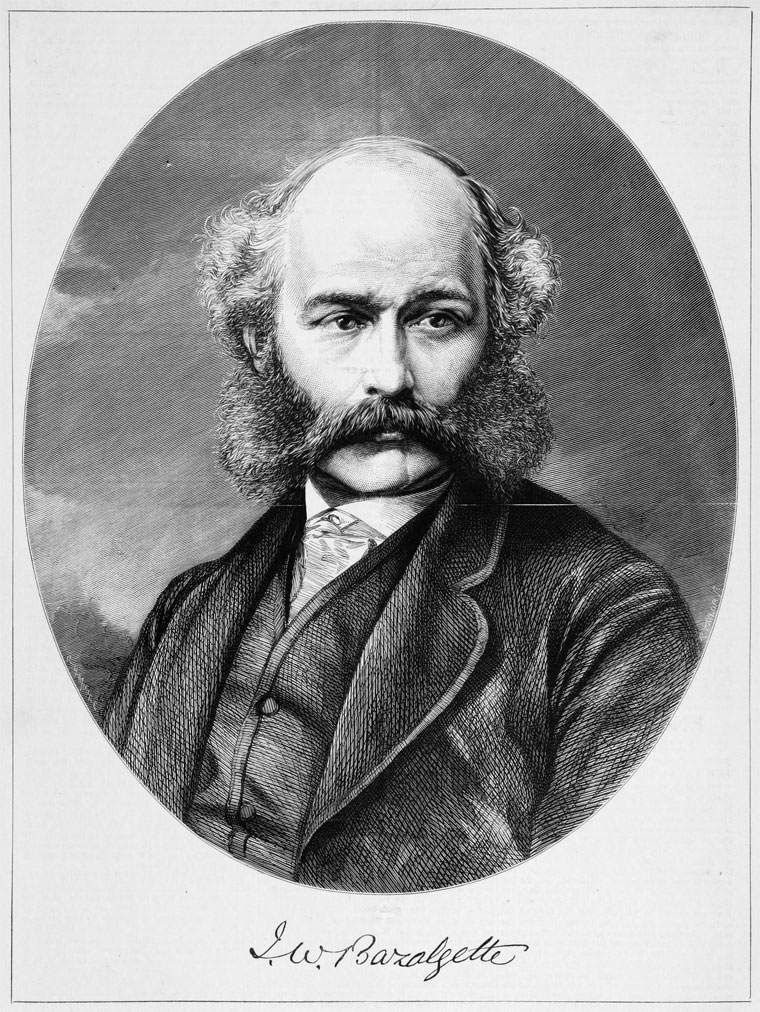 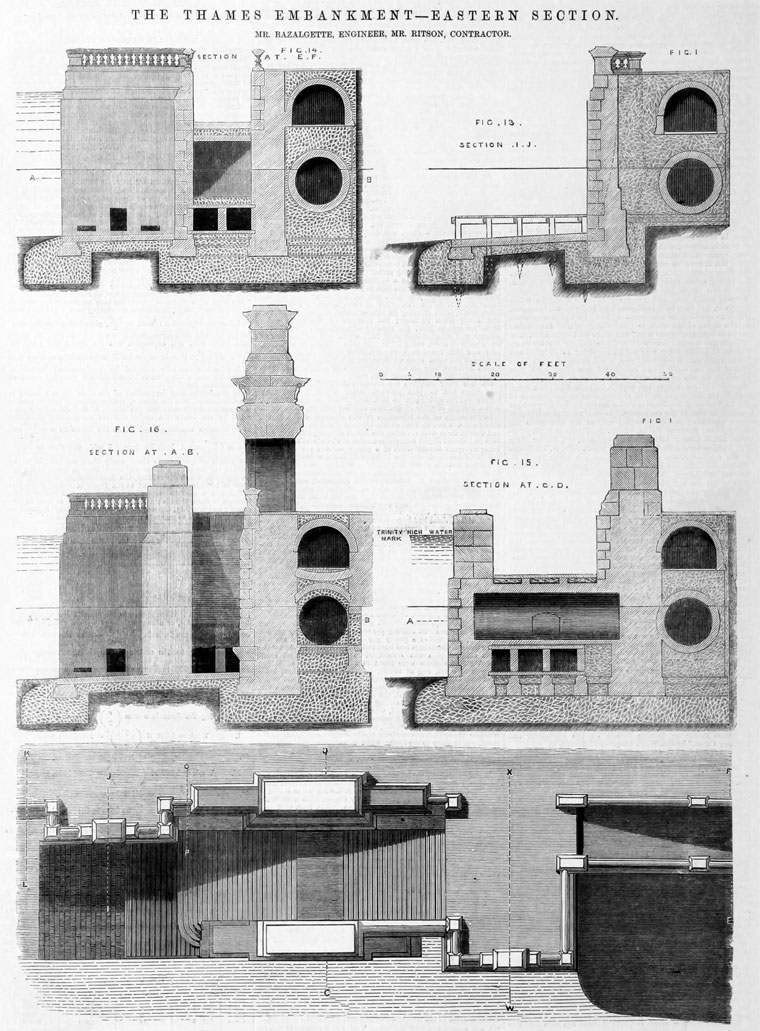 As chief engineer of the Metropolitan Board of Works his major achievement was the creation in response to "The Great Stink" of 1858 of a sewer network for central London which was instrumental in relieving the city from cholera epidemics, while beginning the cleansing and restructure of the River Thames.

1838 Joseph William Bazalgette of 48 Hamilton terrace, Regents Park, a student, became a member of the Institution of Civil Engineers.[1]

He began his career working on railway projects, articled to noted engineer Sir John Macneill and gaining sufficient experience (some in Ireland) in land drainage and reclamation works for him to set up his own London consulting practice in 1842.

1844 Partnership dissolved. '...the Partnership lately subsisting between us the undersigned, Henry Troubridge Wright and Joseph William Bazalgette, as Architects and Surveyors, and Civil Engineers, and carried on by us at No. 24, Great George-street, Westminster, was dissolved, by mutual consent...'[2]

1845 By the time he married, in 1845, Bazalgette was deeply involved in the expansion of the railway network, working so hard that he suffered a nervous breakdown two years later. About the same time he gained celebrity in the execution of drainage works in the North of Ireland. [3]

1847 While he was recovering, London's short-lived Metropolitan Commission of Sewers (created in 1847) ordered that all cesspits should be closed and that house drains should connect to sewers and empty into the Thames. As a result, a cholera epidemic (1848–49) then killed 14,137 Londoners. 30,000 cesspits were abolished in the course of six years, under the powers conferred by an Act of Parliament.

The polluted state of the river Thames began to attract attention. The needed for change was so apparent that the Commissioners invited designs for the purification of the Thames, and received, in response, 116 different schemes. It was declared that Mr. McClean's was the best, but even that could not be recommended for adoption.[4]

1849 Bazalgette was appointed assistant surveyor to the Commission

1852 the fifth Commission was formed; Bazalgette succeeded to the post vacated by Mr. Forster taking over as Engineer. His predecessor is reported to have died of "harassing fatigues and anxieties."

1853 Another cholera epidemic struck killing 10,738. Medical opinion at the time held that cholera was caused by foul air: a so-called miasma. Dr John Snow had earlier advanced a different explanation, which we now know to be correct: cholera was spread by contaminated water. His view was not generally accepted.

1854 the task of preparing a scheme was assigned to Sir J. Bazalgette, Mr. Haywood being associated with him for the northern portion. Mr. Robert Stephenson and Sir William Cubitt reported on the schemes.

1855 The sixth Commission was established but still there seemed no end to the dilemma, and in that year the Act of Parliament was passed which put an end to all Commissions by creating the Metropolitan Board of Works (MBW).

1856 Championed by fellow engineer Isambard Kingdom Brunel, Bazalgette was appointed chief engineer of the Board of Works, a post he retained until the Board was abolished and replaced by the London County Council in 1889.

1858 - the year of the "Great Stink" - Parliament passed an enabling act, in spite of the colossal expense of the project, and Bazalgette's proposals to revolutionise London's sewerage system began to be implemented. The expectation was that enclosed sewers would eliminate the stink, and that this would then reduce the incidence of cholera.

At the time, the Thames was little more than an open sewer, devoid of any fish or other wildlife, and an obvious health hazard to Londoners. Bazalgette's solution (similar to a proposal made by painter John Martin 25 years earlier) was to construct 83 miles of underground brick main sewers to intercept sewage outflows, and 1,100 miles of street sewers, to intercept the raw sewage which up until then flowed freely through the streets and thoroughfares of London. The outflows were diverted downstream where they were dumped, untreated, into the Thames. Extensive sewage treatment facilities were built only decades later.

The scheme involved major pumping stations at Deptford (1864) and at Crossness (1865) on the Erith marshes, on the south side of the Thames, and at Abbey Mills (in the River Lea valley, 1868) and on the Chelsea Embankment (close to Grosvenor Bridge; 1875), north of the river.

1865 March: the undertaking was pronounced to be complete. Even then the northern low-level sewer was unfinished, being kept back by the incomplete state of another great work - that of the Thames Embankment.

The system was opened by Edward, Prince of Wales in 1865, although the whole project was not actually completed for another ten years.

Bazalgette's foresight may be seen in the diameter of the sewers. When planning the network he took the densest population, gave every person the most generous allowance of sewage production and came up with a diameter of pipe needed. He then said 'Well, we're only going to do this once and there's always the unforeseen.' and doubled the diameter to be used. Every Londoner should be grateful for this foresight as the then unforeseen was the tower block. If he had used his original, smaller pipe diameter the sewer would have overflowed in the 1960s. As it is they are still in use to this day.

The unintended consequence of the new sewer system was to eliminate cholera not only in places that no longer stank, but wherever water supplies ceased to be contaminated by sewage. The basic premise of this expensive project was wrong, as so often happens, but the end result was much better than expected, which is a rare occurrence.

The Thames embankments stand next among his achievements. Thirty-seven acres of offensive mud-banks were obliterated by the Victoria Embankment, of which ten acres were occupied by gardens and ornamental grounds in 1889. The Albert Embankment, on the southern shore, has helped to protect the low-lying ground adjacent from the inundations previously occasioned by the overflowing of the river. Including the embankment at Chelsea, the total cost of the embanking process has been about £2,150,000.[5]

1883 He was awarded the Companionship of the Bath and elected President of the Institution of Civil Engineers.

The skill of the engineer was also required in respect of the metropolitan bridges:

He also made numerous street improvements in London, namely subways under the new streets, for the reception of the gas and water pipes. He worked on Queen Victoria Street, Southwark Street, Northumberland Avenue, Shaftesbury Avenue and Charing Cross Road.

1891 March 15th. Died and was buried in the nearby churchyard at St Mary's Church.

There is a blue plaque in his honour where he lived at 17 Hamilton Terrace, St John's Wood.