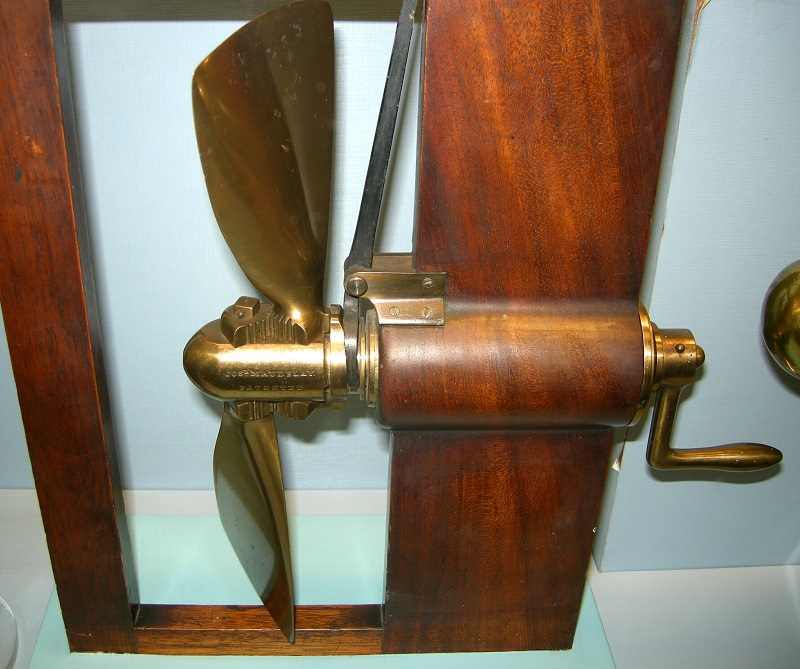 Joseph Maudslay (1801-1861) was one of the sons of the famous inventor and engineer Henry Maudslay. Like his brother Thomas Henry Maudslay, Joseph went to work in the family firm which was renamed Maudslay, Sons and Field to reflect their contribution; the company specialised in marine engineering, patenting the Oscillating engine in 1827. This was one of the most popular marine engines in the paddle steamers of the nineteenth century and, in 1828, was fitted to the Thames steamer ‘Endeavour’ which ran between London and Richmond until 1840.

Together with his father’s partner, Joshua Field, he also invented the Steeple engine in 1839 and the Siamese engine in 1844.

Maudslay built the engines of the first Admiralty screw steamship in 1841 and a larger version of his oscillating engine powered the famous SS Great Eastern.

Joseph Maudslay, the fourth son of the late Henry Maudslay, the celebrated Mechanical Engineer, and founder of the well-known firm of Maudslay, Sons and Field, was born in London on the 17th September, 1801.

It was originally intended to bring him up as a ship-builder, for which purpose he was placed with the late William Pitcher, at Northfleet; but circumstances frustrating that intention, he was taken into the establishment at Lambeth, where he eventually became a partner in the firm.

He always retained his fondness for naval architecture, and his attention to the lines of vessels was of great utility, in the determination of the necessary motive power for their propulsion. Mr. Maudslay was one of the first to perceive the advantages of direct-acting engines for marine purposes; and in 1827, he patented an arrangement for applying to the engines with oscillating cylinders, (introduced by the late A. Manby in 1819,) the ordinary slide valve worked by an eccentric. A pair of these engines was, in 1828, fitted on board the 'Endeavour,’ a small vessel which plied for many years between London and Richmond.

Several pairs of these engines were fitted in 1832 into iron vessels built by Maudslay, Sons and Field, by order of the East India Company, for the navigation of the Ganges.

The prejudice against the use of oscillating cylinders was, however, so strong, at that period, that other forms of direct-acting engines were devised, and in 1839, in conjunction with the late Joshua Field, (Past-President, Inst.,C.E.,) he patented the direct-acting engine with double cylinders, which has been extensively adopted by the British as well as by foreign Governments, for vessels of war, and has also been used by the mercantile marine. This prejudice has since been removed, and oscillating engines are now generally regarded as the most successful arrangement of direct-acting engines for paddle-wheel propulsion, although it is still argued by some Engineers, that for very large powers the fixed double cylinder engines are preferable.

In 1841 he also patented the annular cylinder engine, which has been successfully used in several of the fast packets between England and France and the Channel Islands.

Mr. Maudslay was so much impressed with the necessity for employing an improved class of vessels for the different packet stations, that he, in conjunction with Ditchburn and Mare, and the late John Hayward, of Dover, built, in 1843, the 'Princess Alice,' a vessel of 274 tons, fitted with annular engines of 120 H.P. power, and having tubular boilers. This vessel, now an Admiralty yacht at Devonport, may be considered as the type of the fast packets since placed on the different Channel stations, and was soon after purchased by the Government, for the service between Dover and Calais.

She was speedily followed by four other vessels, which were built in 1844, and were fitted with similar engines of 120 H.P. for the service between Folkestone and Boulogne, in connection with the South Eastern Railway, whilst others of somewhat larger power were constructed for the Southampton and Channel Islands station, and for foreign Governments.

Mr. Maudslay took great interest in the different experiments tried on board H.M.S. ‘Rattler,’ which was fitted with engines by his firm in 1841, to test the applicability of the screw propeller, and he early became convinced of the necessity of abandoning wheel-work for driving the screw, and of adapting the engines to work with the number of revolutions necessary for driving the screw direct. To test this he, in conjunction with his partners, built the 'Water-lily,’ a vessel of 184 tons, and fitted her with direct-acting engines of 50 H.P. Numerous experiments were tried at considerable cost to the firm, in this vessel, with different forms of screws, before she was sold to the Austrian Government for a steam-yacht. The application of engines for driving the screw direct was so successful on board this vessel, that, on the advice of Mr. Maudslay, the Admiralty had one of the full-powered screw vessels ordered in 1846 fitted with the direct-acting engines; and the 'Niger' was so fitted by Messrs. Maudslay, Sons, and Field, with engines of 400 H.P. These engines made seventy-five revolutions per minute, which was considered a great speed at that time, and the correctness of Mr. Maudslay's views has been since shown, by the almost universal adoption of direct-acting engines for driving the screw, not only in the Admiralty Service, but also in the Mercantile Marine.

Mr. Maudslay likewise devoted much time and thought towards the adaptation of the screw to all circumstances in which vessels might be placed; and in 1848 he patented a feathering screw, for the purpose of enabling the vessel to proceed under sail alone, without the resistance caused by dragging the ordinary screw through the water. [See photo]. Feathering screws were accordingly employed in 1850 in three vessels of 530 tons burthen and 100 H.P. belonging to the General Screw Steam Shipping Company, and the success was such as to induce the Company to apply propellers on that principle to their fleet of large vessels of 1,800 tons burthen and 300 H.P. These screws answered so well on the voyages to and from Calcutta and Australia, and induced so large a saving of fuel, when the working of them became properly understood, that they have been constantly employed since that time.

In 1857, Mr. Maudslay patented an arrangement of direct-acting annular-cylinder screw engines, which, with his patent feathering screw with differential pitch, was applied with great success to Sir Henry Oglander's yacht 'Firefly,' of 20 H.P. and 200 tons burthen; and early in the year 1862 he had a new yacht of 110 tons and 20 H.P., built and fitted with a similar screw for his own use. The vessel, which was built on lines of his own design, formed the subject of a short Paper read before the Institution of Naval Architects in the year 1860.

Mr. Maudslay was a man of singularly upright and honourable views; no personal considerations ever having sufficient weight to induce him to diverge from what he considered to be the proper course. This in matters of business assumed at times an apparently too rigid tone, but eventually he was generally admitted to be right in his views. Those who were only acquainted with him in his professional capacity knew but half his worth. Of a warm and genial nature, and peculiarly happy in his domestic life, he loved to diffuse around him the benevolent and kindly emotions by which he himself was actuated; and although for the last eleven or twelve years of his life his sufferings were of the most acute and painful character, they had not the effect of ruffling his temper, nor of disturbing the cheerfulness so natural to him, and which was never more marked than when surrounded by his family and friends.

His name must now be enrolled on the list of those useful men whose labours have so largely contributed to the honour and prosperity of their country. Eminent in a professional and estimable in a personal point of view, he will be remembered with respect by those who knew him in his ordinary relations to society, whilst, as an affectionate husband, a fond father, and a true friend, his memory will long be cherished in that family circle where the true character only is fully and properly estimated.

Mr. Maudslay became a Member of the Institution so early as the year 1833, and until the state of his health prevented his attendance at the Meetings, he took great interest in the proceedings.

His decease occurred on the 25th of September, 1861, only a few days after entering on his sixty-first year.