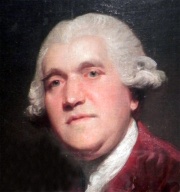 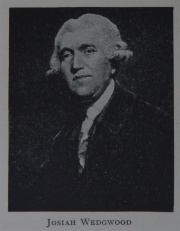 The engine-turning lathe of Josiah Wedgwood. Exhibit at the Wedgwood Museum.

Josiah Wedgwood (July 12, 1730 – January 3, 1795), was born in Burslem, Stoke-on-Trent. He is credited with the industrialization of the manufacture of pottery. One of his famous offspring was his grandson, Charles Darwin.

Born the twelfth and youngest child of Thomas Wedgwood III and Mary Wedgwood, Josiah was raised within a family of English Dissenters. He survived a childhood bout of smallpox to serve as an apprentice potter under his eldest brother, Thomas Wedgwood IV. Smallpox left Josiah with a permanently weakened knee, which made him unable to work the foot pedal of a potter's wheel. As a result, he concentrated from an early age on designing pottery rather than making it.

Josiah's father died in 1739, bequeathing the small family business to his eldest son, Thomas. On 11 November 1744 Josiah was apprenticed for five years to his brother at the Churchyard works. He continued to work for his brother until 1752, when he formed a partnership with John Harrison and Thomas Alders of Cliff Bank, Stoke-on-Trent. Two years later he was taken into partnership by Thomas Whieldon, one of the most respected potters in England, at his factory at Fenton Vivian, near Stoke.

There he began experimenting with a wide variety of pottery techniques, an experimentation that coincided with the burgeoning early industrial city of Manchester, which was nearby. Inspired, Wedgwood leased the Ivy Works in his home town of Burslem and set to work.

1759 After inventing the improved green glaze which is still popular today, Wedgwood ended his partnership with Whieldon and went into business for himself at the Ivy House factory in Burslem.

1764 Married a distant cousin, Sarah Wedgwood, who backed him financially with the large dowry she brought to the marriage. Over the course of the next decade, his experimentation transformed the sleepy artisan works into the first true pottery factory, which became Josiah Wedgwood and Sons.

Of the seven children of Josiah and Sarah Wedgwood born between 1765 and 1778, two died young: their second son, Richard, who lived less than a year, and their youngest daughter, Mary Ann, who died at the age of eight. The eldest child, Susannah, Josiah's favourite, was to marry Erasmus Darwin's son, Robert (their fifth child was the naturalist Charles Darwin). The three surviving sons, John, Josiah, and Tom, were educated privately before going to Edinburgh University. All received training in the pottery business but in 1779 Wedgwood confided to Bentley that he expected his eldest son to be ‘settled as a gentleman farmer’ while Josiah (II) and Tom were to be ‘potters and partners in trade’.

Wedgwood's work was of very high quality (when visiting his workshop, if he saw an offending vessel that failed to meet with his standards, he would smash it with his stick, exclaiming, "This will not do for Josiah Wedgwood!"). Wedgwood was also keenly interested in the scientific advances of his day and it was this interest that underpinned his adoption of its approach and methods to revolutionize the quality of his pottery. His unique glazes began to distinguish Josiah's wares from anything else on the market.

By 1763 he was receiving orders from the highest levels of the British nobility, including Queen Charlotte. Wedgwood convinced her to let him name the line of pottery she purchased "Queen's Ware", and trumpeted the royal association in his paperwork and stationery. In the early 1770s the Empress Catherine of Russia ordered the Green Frog Service from Wedgwood; it can still be seen in the Hermitage Museum. As a burgeoning industrialist, Wedgwood was a major backer of the Trent and Mersey Canal dug between the River Trent and River Mersey, during which time he became friends with Erasmus Darwin.

Later that decade, his burgeoning business caused him to move from the smaller Ivy Works to the newly-built Etruria Works, which would run for 180 years. The factory was so-named after the Etruria district of Italy, where black porcelain dating to Etruscan times was being excavated. Wedgwood found this porcelain inspiring, and his first major commercial success was its duplication with what he called "Black Basalt". Not long after the new works opened, continuing trouble with his smallpox-afflicted knee made necessary the amputation of his right leg.

In 1780, his long-time business partner Thomas Bentley died, and Wedgwood turned to Darwin for help in running the business. Wedgwood's cousin Thomas, his partner in the manufacture of ‘useful’ wares, left the firm in 1788 and died shortly afterwards, leaving Wedgwood in sole control. Only Wedgwood's nephew, Tom Byerley, to whom he had entrusted the London showrooms after Bentley's death, combined sufficient experience in the business with a genuine desire to share the burden.

In the latter part of his life, Wedgwood's obsession was to duplicate the Portland Vase, a blue and white glass vase dating to the first century CE. For three years he worked on the project, eventually producing what he considered a satisfactory copy in 1789.

In 1790 Wedgwood nevertheless took his three sons and his nephew into partnership and began progressively to retire from active control but in 1793 both his eldest and his youngest sons resigned. After passing on his company to his sons, Wedgwood died in 1795.

Wedgwood's company is still a famous name in pottery today (as part of Waterford Wedgwood). "Wedgwood China" is the commonly used term for his Jasperware, the blue (or sometimes green) china with overlaid white decoration, still common throughout the world.

He was an active member of the Lunar Society and is remembered on the Moonstones in Birmingham. He was elected to the Royal Society in 1783. He was also a prominent slavery abolitionist. His home Etruria Hall, built 1768–1771 by Joseph Pickford, was restored as part of the 1986 Stoke-on-Trent Garden Festival is now part of a four-star hotel.

Enoch Wedgwood, a distant relative of Josiah's, was also a potter, who founded Wedgwood and Co.

There were other Wedgwoods in British public life (in addition to those named in Wedgwood) who are mostly related to the extended family of Josiah Wedgwood.