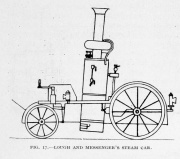 In 1858, Messrs. Lough and Messenger, of Swindon, designed and erected the little steam road locomotive, illustrated by Fig. 56. This engine, after two years constant running at 15 miles an hour on level roads, and 6 miles an hour up inclines of 1 in 20, was pronounced a perfect success. In the makers' opinion, direct-acting engines were preferable for simplicity's sake; hence the engine illustrated had two cylinders, each 3.5in. diameter and 5in. stroke, working direct on to the crank axle. The driving wheels were 3.5ft. diameter, and the leading wheels 2ft. diameter. The vertical boiler was fixed on the framing, slightly raking. It was worked at 120lb. pressure. The tanks held 40 gallons of feed water.

The boiler was fed by the following means: A small cistern is shown, fixed above the boiler, having communication by a simple pipe from the tanks below. A delivery pipe entered the boiler near the bottom, and a steam pipe from the boiler was carried into the top of the cistern and each pipe was fitted with a cock. The air was expelled from the cistern, and filled with steam, which was accomplished by opening the cocks in the steam and supply pipes, and blowing through into the tank. The steam cock was next shut, as a consequence of which a vacuum was formed in the cistern, and water rushed up from the tank and filled the cistern. Ihe supply cock was next shut, and upon the steam cock being opened, the water fell by its own gravity into the boiler.

The total weight of the locomotive was only 8 cwt. Extreme lightness, compared with the power given out, was its chief characteristic. An experienced engineer considered this to be one of the best road locomotives ever turned out.