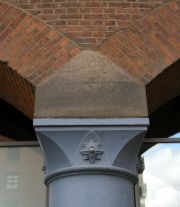 This entry relates to a number of warehouses or goods stations in the Piccadilly area of Manchester. Piccadilly here is used as shorthand for an area centred on the Rochdale and Ashton Canal basins, and bounded by Piccadilly, Port Street, Great Ancoats Street and Store Street.

It was of the three main areas of warehousing and distribution yards in central Manchester, the others being Castlefield, and the Water Street area along the River Irwell. The sites were originally stimulated by the waterways, and then by the coming of the railways.

Many of the Piccadilly area warehouses had direct canal access, with barges docking in portals from which goods could be transhipped. Some had hoists powered by waterwheels. These took water from the canals, but obviously the water had to leave at a lower level. Fortuitously the land was not level here, as witnessed by the number of canal locks, so this presumably allowed the water to be returned to the Rochdale Canal or perhaps to the Shooter's Brook. The brook was probably responsible for lowering the land level in the Store Street area, which dictated the need for the Store Street Aqueduct. This pioneering skewed aqueduct took the Ashton Canal only a short distance west before it terminated in the Ashton Canal Basin.

Many old photographs of the environs of the warehouses may be found on the Manchester City Council Local Image Collection.[1]

Piccadilly Station was originally named London Road Station. The lines to the passenger terminus also served a number of goods stations. Initially the Manchester, Sheffield and Lincolnshire Railway had 'Corn and Flour Stores' at the junction of Store Street and Sheffield Street, with a railway connection across Sheffield Street. They also had a large warehouse across Store Street which backed on to the Manchester Ashton-under-Lyne Oldham and Stockport Canal wharf.

The MS&LR (later Great Central Railway warehouse was soon joined by a London and North Western Railway warehouse, and the two were served by railway lines crossing Store Street. The GCR goods station was considerably enlarged, and the complex backed onto Ducie Street.

Useful information, including an aerial view of the area, may be found here[2]

1850 Robinson and Russell provided ironwork for the 'stupendous' viaduct for the joint MS&LR/LNWR goods station in Manchester. The viaduct had large cast iron girders supported by 28 cast iron Doric columns, 20 ft high, each weighing 6½ tons. Store Street was crossed by a 68 ft span wrought iron bridge of unusual design. The designer was Alfred Stanistreet Jee.[3]. All of the cast iron was of the toughened type patented by J. D. M. Stirling. An old photograph here shows that the by 1896 the bridge across Store Street had been replaced by a less interesting version. Doric columns can be seen in this 1912 photograph.

1851 'INSTITUTION OF CIVIL ENGINEERS, JAN.27.- Mr. J. M. Rendel, president, in the chair.
….. The paper read was a "Description of a Cast Iron Viaduct erected at Manchester, forming part of the Joint Stations of the London and North Western, and Manchester, Sheffield, and Lincolnshire Railways, by Mr. A. S. Jee, M. Inst. C. E. The object of this structure was to obtain increased accommodation for the goods station of the two companies, which was formed on brick arches, at a level of about 30 feet above the adjacent streets, Ihe arches themselves being used as goods warehouses, and the communication between the two levels being effected by means of hoists. This extension was 700 feet long and 36 feet wide, and as it was necessary that it should cover, without interfering with, the lines of way on the low level, a row of Doric columns, of cast iron, surmounted by an entablature forming the inclosure of the station, was arranged, each about 20 feet apart from centre to centre, on the outer boundary of the space to be occupied, and on these one end of a transverse cast iron girder was placed, the other end being supported by the brick arching. To the transverse girders longitudinal cast iron girders, one to each rail, were attached, and to these, half balks of Memel timber were bolted, the whole being planked with 3-inch deals, on which three lines of way, and an ample supply of turn-tables for working the traffic, were laid. To effect a communication between this station and a warehouse belonging to the Sheffield Company, Store-street had to be crossed, which was done by means of wrought iron girders, 68 feet clear span, of peculiar construction. The top part of these girders consisted of a cylindrical tube, 2 feet in dameter, made of boiler plate half inch thick ; the middle web was 3 feet 6 inches in depth, and formed of plates 5-16ths of an inch thick; the bottom flange was 20 inches in width, and at the centre was composed of three plates, each 3-8ths of an inch thick , diminished to one plate at the ends. These girders were each tested with a weight of 60 tons at the centre, when the deflection was not found to exceed one inch. The whole of the cast iron work was of Stirling's Toughened Iron, by which a saving, in weight, of about one fourth of the quantity that would have been necessary with ordinary iron, was effected, without any diminution in the absolute strength. Messrs. Robinson and Russell were the contractors, and they had most satisfactorily performed the work, the total cost of which, including twenty-one turn-tables, was under £14,000, or about £20 per lineal foot.’[4]

Details of the warehouses are well-shown in Goad's Insurance Plans dated 1889. The largest building, which is the only survivor and was opened in 1867, had 7 storeys. Trains came in at the ground floor level alongside platforms for loading and unloading. Hoists raised and lowered goods through 18 floor openings measuring 6ft by 5ft protected by wrought iron folding flaps. The floors were supported by cast iron columns whose diameter increased progressively with each floor level. The bottom of each floor comprised brick arches springing from cast iron girders. Concrete was laid on the brick arches, with wooden joists and plank floors on top of the concrete. The floor above the loading floor was called the shipping room, with cotton and sugar stored above that, followed by hops on the next floor, cotton, hemp and paper on the next, then rope and hemp, while the top floor contained machinery and the railway company's stores. There was a smaller warehouse running along Store Street, with a four bay loading shed between the two warehouses. These were owned by the MS&LR/GCR.

The L&NWR had a warehouse to the west of the GCR warehouses.

The GCR had another warehouse, called the Union Warehouse, on the opposite side of London Road. The 1889 Goad plan shows 7 floors above ground level, used for storing flour, grain, rope, cotton and general goods, while oil was stored in the basement. The Rochdale Canal ran through two tunnels below the warehouse. There was an opening through the roof of one tunnel into the ground floor room. This warehouse was not of 'fireproof' construction. It was also shown as Union Warehouse on the 1849 OS map. The same building is also shown on Bancks's 1831 map, clearly showing that it pre-dates the coming of the railway.

A 1966 photo taken during the demolition of the former LNWR depot reveals a rather relaxed approach to health and safety.[5]

The 1889 Goad plans also shows a vast network of vaults beneath London Road (now Piccadilly) Station, which were used to store a variety of goods. The plans also show that the former MS&LR Corn & Flour Stores (shown on the 1849 OS map on the north side of Sheffield Street) were now embodied in the Station complex, following the construction of a viaduct covering that part of Sheffield Street. The seven-storey building was now a grain warehouse and bonded store.

This is a rare surviving Manchester example of a stone-built warehouse dating from 1806, probably designed by William Crosley. The floors are supported by cast iron columns. These are unusual in having branched arms to help support the floor joists, while those on upper floors have ridges cast in to accommodate partitions.

In 1824 a water wheel and machinery were installed by T. C. Hewes to operate hoists in this and an adjacent warehouse.[6]

These warehouses, along with the Store Street Iron Works, were built around the canal basin, and the arrangement shown on 1849 OS map suggests that this was a relatively secure compound. In fact there was no access for barge horses, the towpath being turned of immediately after passing under the Junction Street bridge.

In 1849 the largest warehouse in this compound belonged to the MS&LR. This became the location of the group described above as the London Road Warehouses. Sandwiched between this warehouse and the Store Street Iron Works was the Manchester Surveyors of Highways Paving Stone and Sand Yard, where materials were brought in by barge and sent out by cart onto Store Street.

Warehouses and wharfs on the Ducie Street side dealt mainly with coal in 1849, although there was also an iron warehouse at the Piccadilly end. Owners of warehouses here included the North Staffordshire Railway, Anderton Carrying Co, Peak Forest Canal Co, Ashton Canal Co, Fairbottom Blackmine Co, and the Huddersfield Canal Co.

A 1960 photo shows an area near the basin with an ancient wooden crane.

This is at the northern corner of the area under consideration, furthest from Piccadilly. The 1849 OS map shows a group of three large square buildings collectively labelled Iron Warehouses, with the frontage on Port Street, and backing on to an arm of the Ashton Canal. Goad's Plans show that by 1888 only the western building of the three was used for iron, being occupied by Hall and Pickles. The adjacent building was unoccupied, while the third was occupied by McDougall Bros, 'agricultural chemists'. Hall & Pickles had another warehouse for iron on the opposite side of the canal, and alongside this was the 'Burton lime plaster and lath warehouse' of Samuel Bibbington.

This study focused on a area of the Rochdale Canal Basin adjacent to Jackson’s Warehouse, an 1836 Grade II* listed building. Within a 200 metre radius of the Site Area there are 22 buildings or structures of special architectural interest which are listed Grade II or Grade II*.[7]