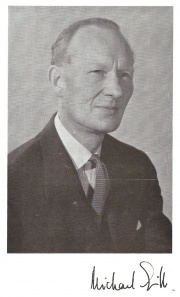 "It is a tragedy that Michael Gibb in his prime of life and with much still to accomplish should have met his death in a motor accident on the 10th August 1970. Michael represented the sixth generation, in direct succession, of civil engineers.

Michael's great great grandfather, William Gibb, belonged to the first great generation of civil engineers, which included James Brindley and John Smeaton. His son, John, was one of Thomas Telford's most trusted deputies before he set up, like his father, as a contractor, in which capacity he built the old Broomielaw bridge in Glasgow and a difficult section of the Edinburgh - Glasgow railway. He was a founder member of the Institution of Civil Engineers.

John's son, Alexander, a pupil of Telford, took over his father's business and cooperated with Robert Stevenson in the construction of lighthouses. Easton, his son, founded the contracting firm of Easton Gibb and Son which was continued under the direction of Easton's son, Alexander (later Sir Alexander and Michael's father), for sixteen years before he founded his firm of consulting engineers in 1922.

Michael Gibb was born at Perth on the 15th October 1914 while his father was engaged at Rosyth. He was educated at Eton and New College Oxford where he read Engineering Science. He graduated in 1937 in English History, French Literature, and Law of Contract. His B.A degree was followed by an M.A in 1938. He received his training as assistant under agreement to Mr Maurice Wilson, M.I.C.E, a senior partner of Coode Wilson Mitchell and Vaughan Lee, consulting engineers (now Coode & Partners).

Michael served in the Second World War from 1940 to 1946 in the Inns of Court Regiment and saw active service in North West Europe, rising to the rank of Major.

In 1946 he joined his father's firm for two years on design and subsequently for a similar period on supervision of hydro-electric works in Scotland. Experience in East Africa followed from 1951 to 1953 on the Owen Falls Scheme and roadworks, during which period he was appointed Resident Partner of Sir Alexander Gibb & Partners (Africa ).

Michael, having proved his capacity, was assumed into partnership of the London firm in April 1954, a year before his eldest brother, Alistair, the senior partner, also met his death in a tragic accident in what he intended to be his last game of first-class polo. It must have been a serious loss to Michael at the time, as it undoubtedly was to the remaining partners.

During the fifteen years Michael was a partner he concentrated on marine works in various parts of the world, which was also his father's particular interest. The schemes included the new naval base for the Indian Government in Bombay, and marine projects in Western Australia, New South Wales, Mauritius, Rangoon, and Colombia, with work at home at Ipswich, Harwich, and Birkenhead.

He carried out all his work with great determination and perseverance. It was not easy to follow in the footsteps of a famous father and elder brother. Anything Michael tackled was most thoroughly carried out; he always set himself the highest standards and was a tireless worker, but with all this a man admired and liked by everyone. To the many problems he nevertheless always brought a great sense of humour. His chairmanship of the Association of Consulting Engineers was a task most ably performed in which he gained many friends and a very high reputation. He served on three British Trade Missions - to Ethiopia in 1964, to Jordan in 1966, and to the Congo in 1970.

He was also proud of his post as one of the wardens of the Skinners' Company. He was a member of the Court and had served the offices of Renter Warden and Third Warden; at the time of his death he was Second Warden with the possibility in two years' time of becoming Master.

All of us who knew him will miss his cheerfulness and good comradeship, particularly his partners and those who have worked closely with him both inside and outside his firm. T.A.L.P..