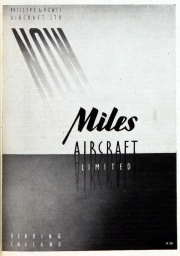 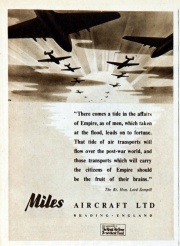 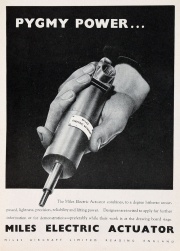 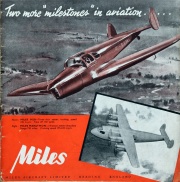 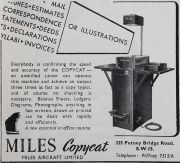 Miles was the name used to market the aircraft of British engineer Frederick George Miles who designed numerous light civil and military aircraft and a range of curious prototypes. These aircraft were produced by three distinct companies; several individual aircraft designs were produced before there was a company trading under the Miles name.

Miles-designed aircraft were often technologically and aerodynamically advanced for their time; the M.20 emergency production fighter prototype outperformed contemporary Hawker Hurricanes and Spitfires, despite having fixed landing gear. The X Minor was a flying testbed for blended wing-fuselage designs, though the large commercial transport intended to be produced from this research never entered production.

1933 Phillips and Powis Aircraft built an aircraft, the Hawk, designed by Frederick George Miles and his wife.

1941 Rolls-Royce withdrew its capital and Miles took control of the company.

WWII: The company produced the Master advanced trainer, as well as the Martinet and Monitor target tugs, and the Magister and Messenger, which was built in Northern Ireland; one of these aircraft was used by Montgomery in the invasion of Germany. Other products included a torpedo stabilizing mechanism, Miles Actuators, a revolutionary writing instrument which would be made on behalf of the Miles Martin Pen Co, and the Miles Copycat which had been invented for their own purposes some years previously and would now be sold wider[2].

1943 Sir Stafford Cripps, Minister of Aircraft Production, awarded Miles a contract to design and produce a supersonic aircraft, the M.52, powered by a Whittle engine.

1946 February the prototype of the M.52 was almost ready but the contract was cancelled by the Ministry following the discovery of German research on swept-back wings. This would have been the world's first supersonic jet aircraft. Miles was required to send all the technical data to NASA; it is believed to have influenced the design of the Bell X-1.

They produced a revolutionary transport – the Aerovan.

1947 September: it was discovered the company was operating at a considerable loss; F. G. Miles guaranteed to pay the dividend on the preference shares himself; Mr S. R. Hogg was appointed to manage the company; F. G. Miles remained as chairman[4]

1948 Miles Aircraft Ltd failed as result of the problems in returning to civil aircraft production. The aircraft-related assets were purchased by Handley Page as Handley Page Reading. Handley Page produced the Miles-designed M.60 Marathon as the H.P.R.1 Marathon.

1948 December: Frederick Miles started a new business, F. G. Miles which was immediately engaged in the repair and servicing of aircraft at Redhill[5]

Little is known about the Miles Copycat photocopiers. They were originally invented by the Miles technicians to copy the huge amount of technical drawings needed when manufacturing aircraft, a great improvement over the old 'blueprints'. They used the same electrostatic principles later patented by Xerox[6].

In November 1947, Miles Aircraft ceased trading. There were many reasons for the financial problems, not all of them of the company's making and questions remain about the behaviour of the Ministry of Aircraft Production, the company's bank and certain of its financial advisors. In fact, when the company was restructured, many non-aircraft activities prospered in other hands, notably the Biro pen, the Copycat photocopier and its range of electric actuators.

WWII Developed a range of electric actuators initially for use on on aircraft, such as aircraft air intake flap control

The principle of the ballpoint pen dates back to an 1888 patent owned by John J. Loud for a product to mark leather. However, this patent was commercially unexploited.

1938 Laszlo Biro first patented his pen, and applied for a fresh patent in Argentina on June 10, 1943. (Laszlo Biro and his brother Georg Biro emigrated to Argentina in 1940.)

The British Government bought the licensing rights to this patent for the war effort. The British Royal Air Force needed a new type of pen, one that would not leak at higher altitudes in fighter planes as the fountain pen did. Their successful performance for the Air Force brought the Biro pens into the limelight.

It took a lot of development effort to make Biro's ideas work in practice. The first successful models used ball-bearings from crashed Spitfires (Woodley Airfield was a graveyard for many aircraft that staggered home, badly damaged) as these were the only ball bearings machined to a sufficiently high degree of precision. Much of this work was performed at Miles Aircraft, with some at the nearby RAE (Royal Aircraft Establishment) at Farnborough. Miles machinists were quick to make these pens up as fast as they could, they were ideal for writing at high altitudes in unpressurised, unheated crew compartments. Theirs were the first production-quality, reliable ballpoint pens in the world.

Laszlo Biro had neglected to get a U.S. patent for his pen and so, even with the ending of World War II, another battle was just beginning for him but this was too late for Miles Aircraft to gain much financial reward.

May 1945: Eversharp Co teams up with Eberhard-Faber to acquire the exclusive rights to Biro Pens of Argentina. Released to the press months in advance of public sales.

June 1945: Less than a month after Eversharp/Eberhard closed the deal with Eterpen, Chicago businessman, Milton Reynolds visited Buenos Aires. While in a store, he saw the Biro pen and recognized the pen's sales potential. He bought a few pens as samples. Reynolds returned to US and started the Reynolds International Pen Company, ignoring Eversharp's patent rights.

December 1945: Britain was not far behind with the first ballpoint pens available to the public sold at Christmas by the Miles Martin Pen Co.