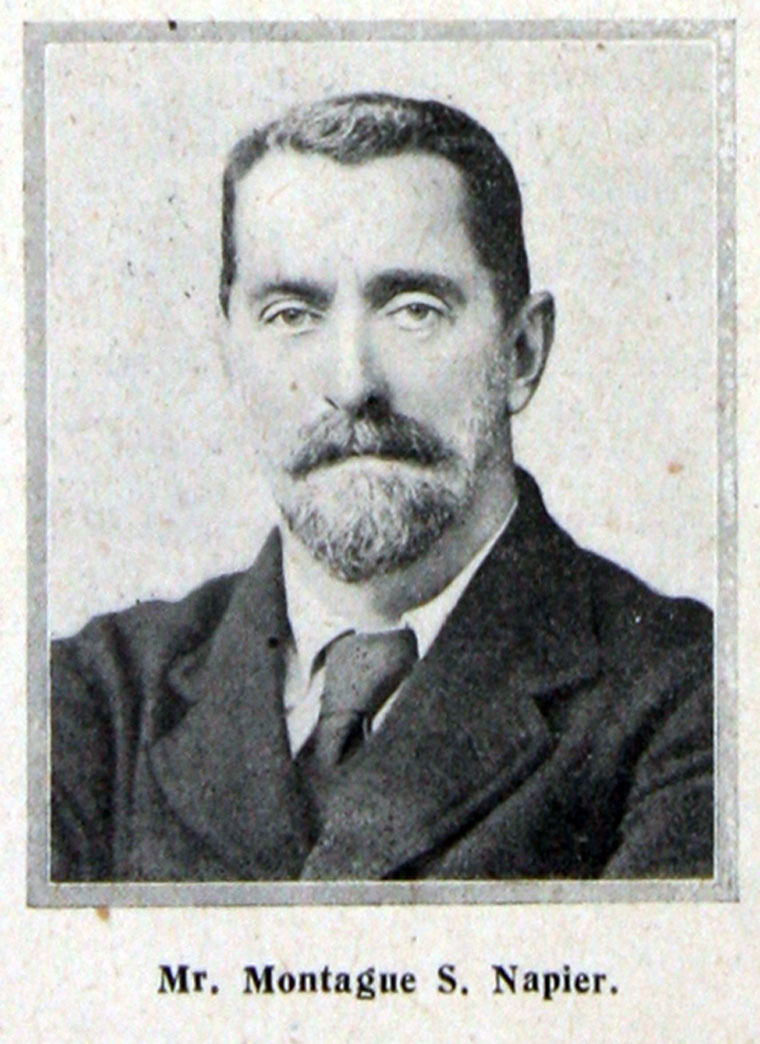 It is said that Montague Napier was manager of Marriott and Cooper's cycle works for a short period [1].

1895 After the death of his father, he bought the family business D. Napier and Son from the executors and expanded into making machine tools for the cycle industry.

1899 Montague Napier became involved with motorcars when at his long established engineering firm in Lambeth, London, he converted the Panhard-Levassor of S. F. Edge from tiller to wheel steering and fitted it with a Napier engine.

The Napier company became world famous in the 20th century for the production of the internal combustion engines.

Later in his career he went on to provide engines for record-breaking vehicles like Bluebird and the Golden Arrow, supply for the RAF and the Navy. Napier engines eventually provided power for the replacement of steam locomotion as an early high speed Inter City rail service. Montague Napier also diversified activities to make smaller cars

1917 Montague Napier's health declined and in 1917 he moved to Cannes, France, but continued to take an active involvement in the company until his death in 1931.

Montague Stanley Napier (14 April 1870 – 22 January 1931) was an English automobile and aircraft engine manufacturer. His grandfather, David Napier (1785–1873), had moved to London from Scotland and by 1836 had established an engineering company in Lambeth called Napier & Son. Montague Napier bought the business from the executors of his father's estate in 1895, and diversified into producing machine tools for the cycle industry.

Following a meeting with businessman and racing driver Selwyn Edge in 1899 Napier diversified into automobile manufacturer, and for a time his company was the leading supplier of luxury cars in the British market. His focus switched from cars to aircraft engines after the outbreak of the First World War in 1914, and he developed the very successful Lion engine.

Napier's failing health forced his move to the south of France in 1915, but he continued to work as a design consultant for his company. He died at his home in Cannes on 22 January 1931, aged 60.

He was born on 14 April 1870 at 68 York Road, Lambeth, London, the youngest of the four sons of James Murdoch Napier and his wife, Fanny Jemima, née Mackenzie. His father had taken over his own father's interest in the engineering business he had set up there by 1836, making printing machinery for the newspaper industry. The business diversified unto making coin-weighing machines for the Royal Mint, but by the time of James Murdoch Napier's death in 1895 it was in decline. Napier had worked in the family business from an early age, but he was not doing so at the time of his father's death. He bought the business from the executors of his father's estate and diversified into producing machine tools for the cycle industry.

Napier met Selwyn Edge in 1899, for whom he agreed to build a car based on Edge's Panhard et Levassor, which he had bought after it came second in the 1896 Paris–Marseilles race. So impressed was Edge with the result that he contracted to buy six more cars, and set up a showroom in London from which to sell them.

The first cars were ready by 1900, and so successful were they that Napier decided to move his company to larger premises in Acton, London. While Napier concentrated on the engineering Edge focused on the marketing and publicity.

In 1902 he drove a Napier to victory in that year's Gordon Bennett Cup, the first British victory in an international motor race.

In 1903 he had married school governess Alice Caroline Mary, née Paterson, with whom he had two sons and two daughters, but the couple were legally separated in 1922.

Until 1906 Napier cars dominated the British luxury car market, but Napier was unconvinced that there was a sustainable long-term market for such vehicles, unlike Rolls-Royce, his main competitor. Napier therefore set up a new company to develop more popular cars.

Following the outbreak of the First World War in 1914 Napier's interest turned increasingly to aircraft engines. Initially Napier & Son built engines designed by the Royal Aircraft Factory, but at his own expense Napier subsequently designed his own, the Lion.

By 1924 about half of all British aircraft were powered by Napier's engine, and Napier automobile production had ceased.

Napier's health had broken down by 1915, probably as a result of cancer, and he moved to the south of France from where he continued working as a consultant to his company. He was unable to design a satisfactory successor to the Lion, and therefore Napier was overtaken in the aero-engine market by Bristol and Rolls-Royce.

Napier died at his home in Cannes, Villa des Cistes, on 22 January 1931, aged 60. The income from his estate of more than £1 million was left to his nurse and reputed mistress, Norah Mary Fryer, for the duration of her life, after which the residue of the estate was to to be given to cancer research.

1932 His widow and children dispute the terms of his will.

With great regret we have to record the death on January 23, at Cannes, France, of Mr. Montague Stanley Napier, aged 60, chairman of D. Napier and Son, of Acton. The late Mr. Napier was a grandson of the founder of the firm which bears his name.

The firm first started work on the Clyde, but in the middle of last century moved to London. From general engineering it came to specialise on motor cars, and afterwards on aero engines. Mr. Montague Napier, who was himself a sound engineer, guided his firm through its last change of occupation, and saw the famous 450-h.p. "Lion" become a success. Then his health broke down, and he was ordered by his doctors to live in the sunny climate of the Riviera. But when any important new departure was taken — as, for example, the designing of the 1,000-h.p. "Cub" — the chief designers of the firm would travel to Cannes to consult with the chairman. Those who knew Mr. Napier have testified to the great charm of his character, and by them in particular his death will be deeply deplored.

Montague Stanley Napier was born in 1870 and was a Member of the Institution of Automobile Engineers from the time when it was first established in London.

Throughout his career he was associated with the famous engineering firm bearing his name, first at Glasgow and then in London.

The firm built its first motor car engines in 1899, and in 1916 commenced building the aeroplane engines which have become world-famous. Mr. Napier was associated with every side of the business until, owing to ill-health, he was compelled to live in the South of France, where, however, he continued his designing work.

Mr. Montague Stanley Napier, who died at Cannes, on Friday, January 23, at the age of 60, came of an engineering family, his grandfather having established the firm which bears his name on the Clyde as long ago as 1808. In those days, Napier’s were engaged in producing a number of high-class and accurate machines, including some which are still being used for coin-weighing in the Bank of England and in India, besides manufacturing some of the earliest marine engines. These activities were continued after the firm had moved from Glasgow to premises in Vine-street, London, near where Waterloo station now stands, in the middle of last century. From 1899 onwards, however, all their energies were devoted to the development of engines for motor oars, a branch of engineering in which their experience in fine work stood them in good stead. This is proved by the fact that, as early as 1902, a Napier car won the Gordon Bennett Trophy, this being the only time that this prize has been secured by a British firm, though over a long period of years the products of the company gained many other racing and endurance successes with oars and engines of various capacities and powers. A further development in the firm s activities took place about the middle of the war, when they began to- build aero engines. The best-known example of these is the Napier Lion water-cooled model, in which the 12 cylinders employed are arranged in three rows.

In the design, production and marketing of all these engines, and of the oars in which they were fitted, Mr. Napier played a leading part, until ill-health compelled him to retire to a milder climate than that of this country. Nevertheless, he continued to work out ideas for improvements, and was in constant consultation with his designing staff. At the present time, the type of engine which he developed for the seaplane which won the Schneider Trophy race in 1927, is being used in a great many military aeroplanes both in this country and abroad, while he was also responsible for the design of a 16-cylinder engine with the cylinders arranged in four banks, a leading feature of which is a great reduction in the head resistance."