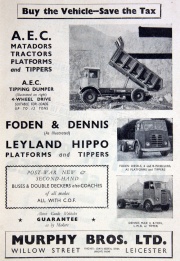 1950 '...vehicles are taken to the premises of the Murphy Brothers. Ltd., in Willow Street. Leicester, for reconditioning and rebuilding to new standards...Hugh Murphy, Managing Director....'[2]

1950 '...One firm applicants, Murphy Bros, Willow Street. Leicester, has made an offer to buy the church and the site...Mr. Hugh Murphy told the Leicester Mercury: We want to put showrooms and offices on the site. We thought that the church stone and the roof would be a business proposition."...'[3]

1968 British Electric Traction Co, after the sale of its bus interests, acquired a number of companies including Murphy Brothers[4]

During the 1930s, six brothers left South Armagh, Ireland and settled in and around the city of Leicester. Hughie and Paddy Murphy started a scrap metal business and branched out into buying and selling cars. This led them to found Murphy Brothers Limited in the 1940s, operating in commercial plant which in turn led to the operation of several open cast coal-mining sites.

As well as coal production Murphy Bros. operated a number of subsidiary companies producing aggregate building blocks, salt glazed pipes and bricks from the clay excavated as a by-product of mining operations. This necessitated the operation of heavy earth-moving machines and a haulage fleet to deliver these materials.

This fleet required a depot and when new premises were needed they were constructed at Willow Street, Humberstone Road, Loughborough Road and in 1954 at Melton Road, Thurmaston, all in close proximity to Leicester city centre by property companies set up by Murphys specifically for that purpose. The Thurmaston headquarters building was centred in 25 acres of land, which was then developed into industrial and warehousing premises for commercial let. Charles Street Buildings (Leicester) Limited was incorporated in 1961, and became the principle Murphy property company. It was named after an office building developed by Hughie and Paddy at Charles Street, Leicester in 1956. It remains the principle CSB company and is wholly owned by the Murphy family.

In 1968, all Murphy Brothers businesses engaged in civil engineering, earth-moving, manufacturing and transport were sold to the British Electric Traction Co. From then on, the Murphys concentrated on property development and investment through CSB.