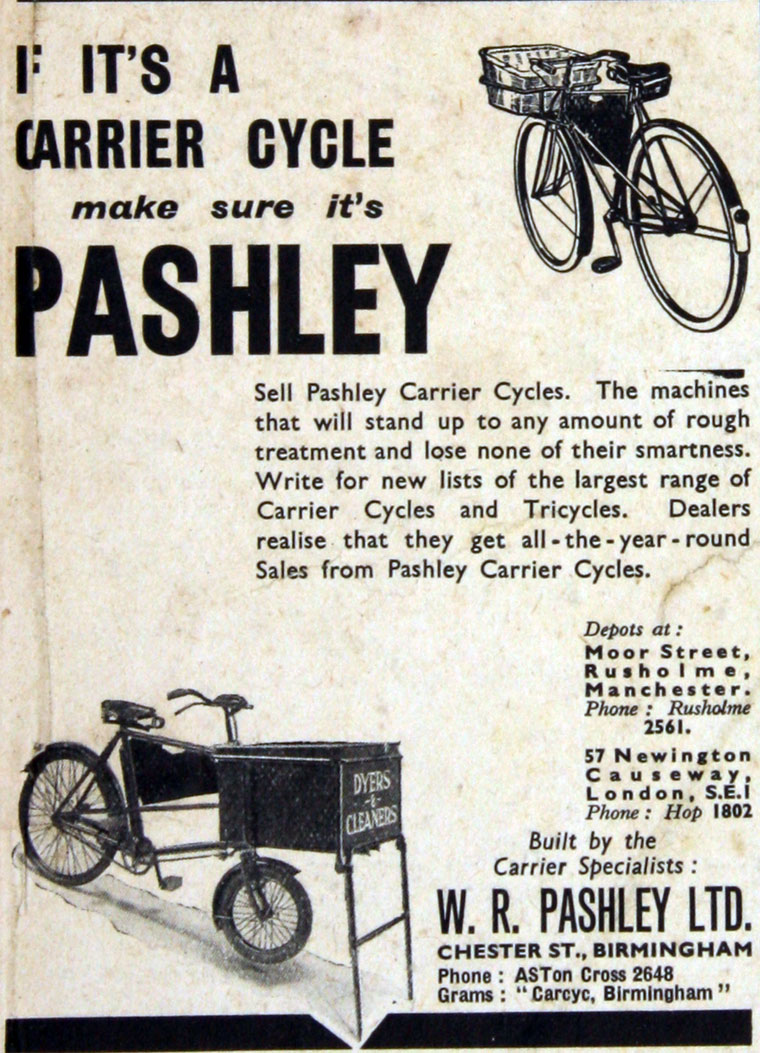 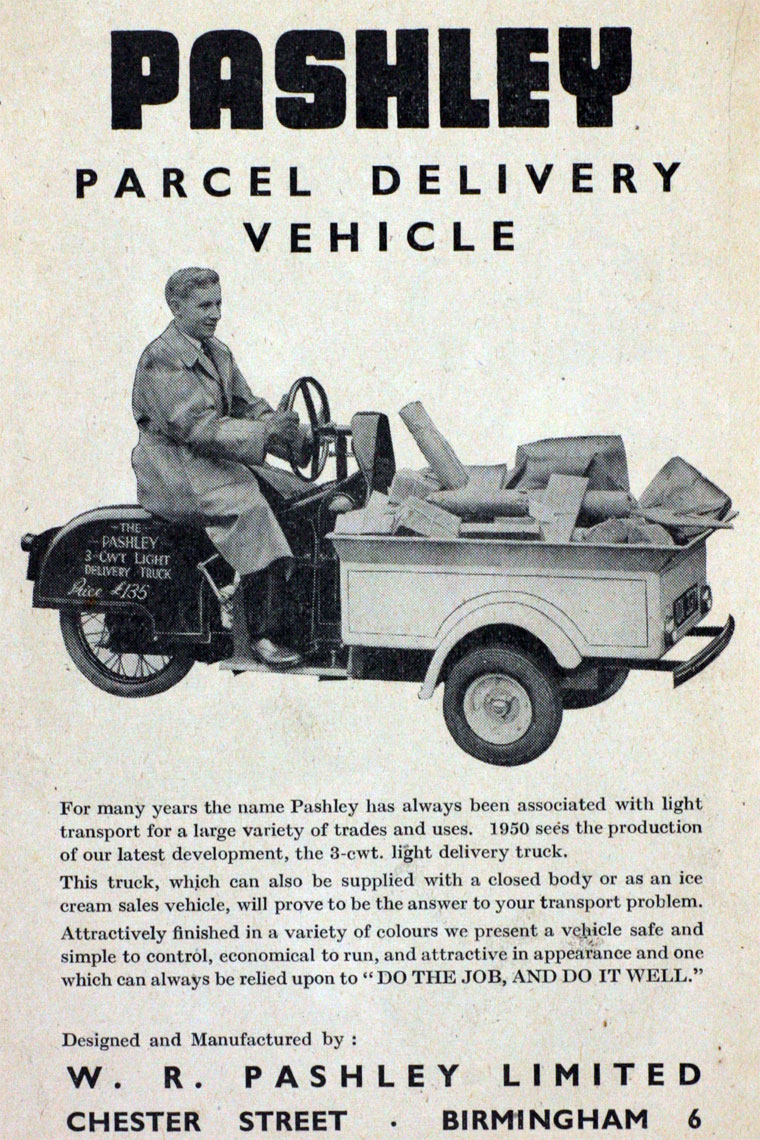 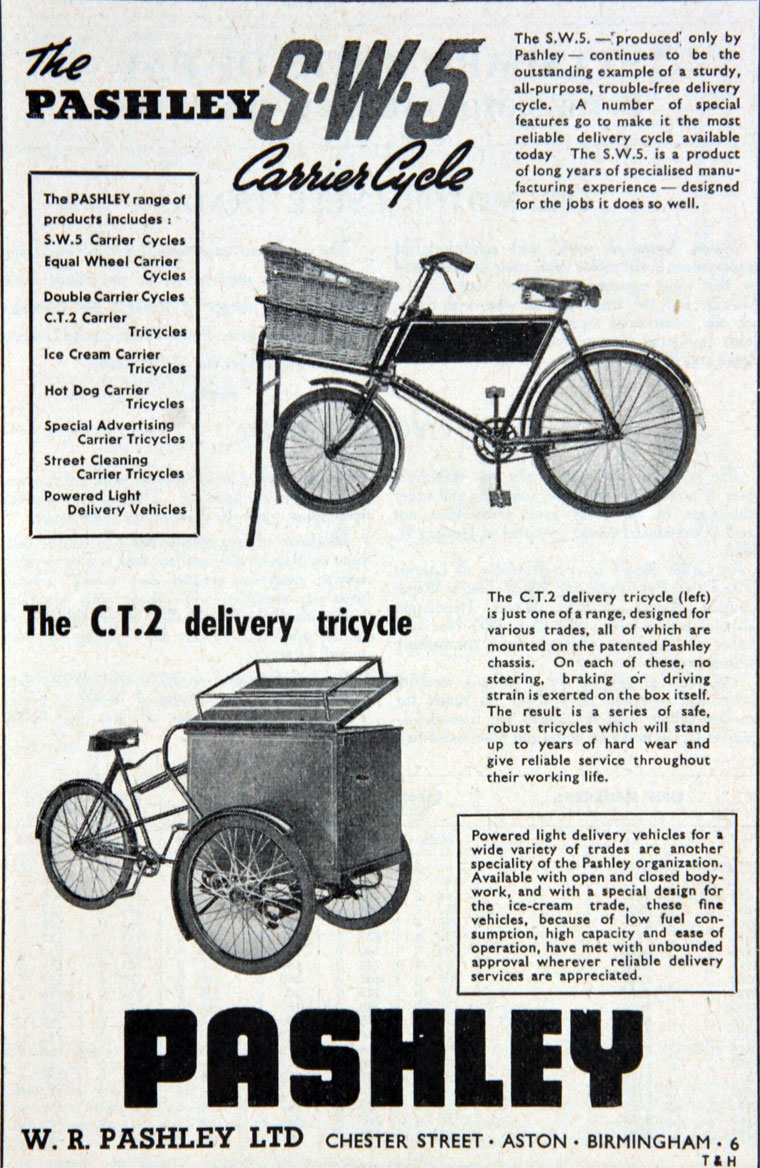 Pashley were motorcycles produced in Chester Street, Aston, Birmingham, from 1949 to 1953, and Carrier Cycles, by W. R. Pashley.

The firm introduced a three-wheeled commercial vehicle in late 1949. With three speeds and a 197cc Villiers engine, the rear part was based on a motorcycle and the front had twin independently sprung 8-inch wheels with an open truck body between them. It had a steering wheel and inter-connecting drum brakes. The whole of the rear section was enclosed by a steel bonnet on which went a pad for the driver. Four body types were listed.

By 1953 such vehicles had become dated and the firm turned its attention to a light three-wheeled car that never went into production.

...'The adaptation process obviously sparked some ideas in Pashley as, after the car, the company began making small motorised vehicles. The Pashley Pelican was a rickshaw-styled transporter of goods and people. This utilised Royal Enfield or BSA motorcycle front ends. The '3cwt Light Delivery Trucks', which used a Villiers 197cc motor, had the load carrying area at the front so that the driver could keep an eye on his goods. These vehicles, along with the standard carrier cycles, proved popular abroad with exports to Denmark and Holland in Europe, and South Africa and Argentina further afield. The Canadian Police made use of the motor rickshaw to collect money from parking meters...' [1]

In 1926, William Rathbone 'Rath' Pashley founded Pashley and Barber in New John Street West, Birmingham. Pashley and Barber declared that they were 'Manufacturers of every type of cycle' and that 'Birmingham produces the finest cycles, these are Birmingham's best'. The model range included everyday roadsters, clubman racing machines, tradesmen's carrier cycles and tandems. Barber was Meg Pashley's (Rath's wife) maiden name. Rath had been apprenticed to the Austin Motor Company before the First World War and saw military service as a despatch rider. These occupations in his early years gave him engineering knowledge and skill and also a lifelong interest in two wheel transport.

Competition in the cycle trade was very fierce and after a short while 'Rath' Pashley realised that success would come through identifying a market niche. A new company, Pashley Carrier Cycles, was formed to concentrate on building carrier cycles designed to withstand the abuse thrown at them by errand boys.

In 1936, the company was incorporated as W. R. Pashley Ltd and moved to a larger new factory (over 30,000 square feet) in Chester Street, Aston. As prosperity returned after the depression, the company increasingly focused on delivery and vending tricycles - for dairy products, ice cream and general deliveries.

In the 1930s, Pashley made almost every component of their cycles in their own factory - for the frames, only the tubing and lugs were bought in. Frame building, brakes, wheels, sheet metal work, polishing and enamelling were all carried out in the works. War years

During the Second World War, Pashley, like many other engineering firms, turned some of its production capacity over to the war effort. Pashley's manufacturing capability proved to be of considerable value and the company produced Browning machine gun mounts among other equipment. Post war

In the years following the war, carrier cycles were still in high demand but it was the continuation of the supply of larger tricycles, and the infant development of the motor car for the mass market, that received most of Pashley's attention. Having made motor rickshaws in the late 1940s, Pashley started the manufacture of Brockhouse Indian Motor Tricycles in 1950 - J. Brockhouse and Co. of Birmingham having acquired the Indian Motorcycle Company of Massachusetts and sub-contracted the manufacture to Pashley. These had a conventional 'two wheels at the back' tricycle layout, similar to the Pashley Pelican motorised rickshaw - with seats for up to four passengers - and the driver. Pashley were the first company to fit hydraulic brakes to what was, technically, a motorcycle. This innovation may have been influenced by Rath's younger son, John Pashley, who worked at Girling. The prototype Pelican Rickshaw has been returned to the company and awaits restoration.

Pashley also moved briefly into car manufacture in 1953, again with a conventional tricycle layout. Perhaps the most successful of the motorised Pashley tricycles was the '3cwt Light Delivery Truck' with a Kendrick wheel layout. This meant two wheels at the front, giving the driver a view of both the loadspace and the overall vehicle width, useful for manoeuvering in tight spaces.

As more conventional motorised transport became available to most businesses in the early 1960s, Pashley's focus moved away from motorised vehicles and, together with the carrier cycles, trolleys, carts and street barrows, a large number of road trailers were manufactured, both as simple chassis and fully bodied.

The 1960s was a pivotal era for Pashley. Rath's son, Dick, took control of the company on his father's retirement. Dick had recently moved to Stratford-upon-Avon, and took the bold decision to move the company from Aston to brand new premises on Masons Road, Stratford. At one time, Pashley had three factories all in the Masons road area. Production Manager John Kirby began working for the company in 1968 and remains with Pashley to this day.

With the advent of small wheel bicycles, pioneered by Alex Moulton in 1962, Dick Pashley developed a simple 'shopping' tricycle, now known as the Pashley Picador. Many thousands of these have been sold since, users benefiting from the stability and low step-through frame. Its all welded construction was very unusual for the cycle industry at the time, and many years passed before other manufacturers adopted it. A similar two-wheeled shopping bicycle, the Piccolo, was also manufactured.

As traditional roadster bicycles began being removed from the ranges of other British manufacturers, Pashley decided to focus on classic roadsters. Some companies sold rebadged Pashley Roadsters in the 1980s and 1990s. These were built to the original 1920s design. For many years, versions of these saw service in large numbers under the patronage of UNICEF. Pashley still make a traditional roadster bicycle and it is still in demand in UK and export markets.

Since inception Pashley has provided carrier cycles to industry and commerce. One of the early, equal-wheel carrier cycles Pashley sold in the 1930s (the 'Model L' for £7.10.0) had a front metal tubular carrier and nameplate in a similar manner to the 'Courier' that the company sells currently. This led on to motorised delivery tricycles and the manufacture of ice-cream carts, railway station platform refreshment trolleys and specialist units for the dairy and catering trades. The company continues to make ice cream vending tricycles (Classic 33) and carts (MPVC) alongside its other workbike products. In 1974, Pashley acquired Gundle, the only other surviving manufacturer of carrier cycles. This cemented their position in the market for this type of bike. For many years Gundle models were built alongside the Pashley range, before being absorbed into the Pashley RH range. The RH range was named after Rath's local public house - 'The Robin Hood' in Hall Green. Pashley also made 'SW' (Small Wheel) bikes and does so today under the name 'Delibike' (see above image).

By the late 1970s, Pashley was supplying bikes to the Royal Mail. The original Royal Mail designed mail delivery cycle was single speed and equipped with rod operated brakes. Pashley was one of a small number of UK manufacturers (including Townsends Cycles) to produce this bike and in the 1990s became the sole supplier. During the mid-1990s. Pashley proposed interim upgrades to the 1992 Royal Mail design which resulted in the 'Millenium' model. This had wider tyres, reliable drum brakes and for the first time provided postal delivery staff with 3 gears.