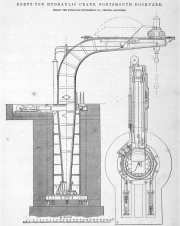 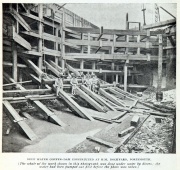 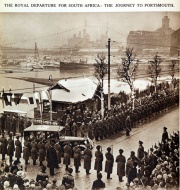 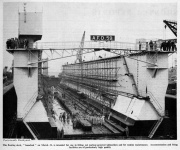 HM Naval Base, Portsmouth, Hampshire, PO1 3LJ. There is a lot to see at the historic dockyard and details can be found on the website.

Along with Chatham, Woolwich, Plymouth and Deptford, it has been one of the main dockyards for the Royal Navy throughout its history.

Rose to prominence during the wars with France, late 18th century.

End of 18th century: The dockyard (like the other Royal dockyards) underwent reforms proposed by Samuel Bentham, Inspector-General of Naval Works. Among his innovations were the Portsmouth Block Mills, an early example of truly industrial-scale production.

From here Nelson embarked on HMS Victory before leaving Britain for the final time before his death at the Battle of Trafalgar.

Expanded significantly in the nineteenth century with new facilities for steam engineering and ironclad shipbuilding.

1866 Mr. Cradock was the Master Shipwright and Chief Engineer[2]

1871 ‘ “The body post” of the Blonde, iron frigate, cased with wood, has recently been cast in the foundry of this dockyard. About twenty-five tons of brass were used in the casting, and the present weight is about fifteen tons. It is the largest casting ever made in this dockyard. There is not the least flaw in it, and the manner in which it has been turned out reflects great credit upon the workmen engaged.’ [3]

1882 To commemorate the services and death of Edward Newman, late Chief Engineer, a new reward is to be given to young Engineers who obtain distinguished merit in practical engineering.[4]

WWI: HMS M.33, a monitor, was built and used to support the Dardanelles campaign. She has recently been restored externally, one of only two surviving naval vessels of WW1. She has been painted above the waterline and the forward 6-inch gun re-instated. In 1995 restoration was taken over by the Hampshire County Council Museums Service. A scheme was devised with the intention of returning the ship to her external 1915 – 1919 configuration.

WWII: Portsmouth and the Naval Base were the headquarters and main departure point for the military and naval units destined for Sword Beach on the Normandy coast as a part of Operation Overlord and the D-Day Landings on June 6, 1944.

2013 the operator BAE Systems announced that it was closing its shipbuilding facility at Portsmouth; part of the shipyard will remain open for repairs/maintenance.