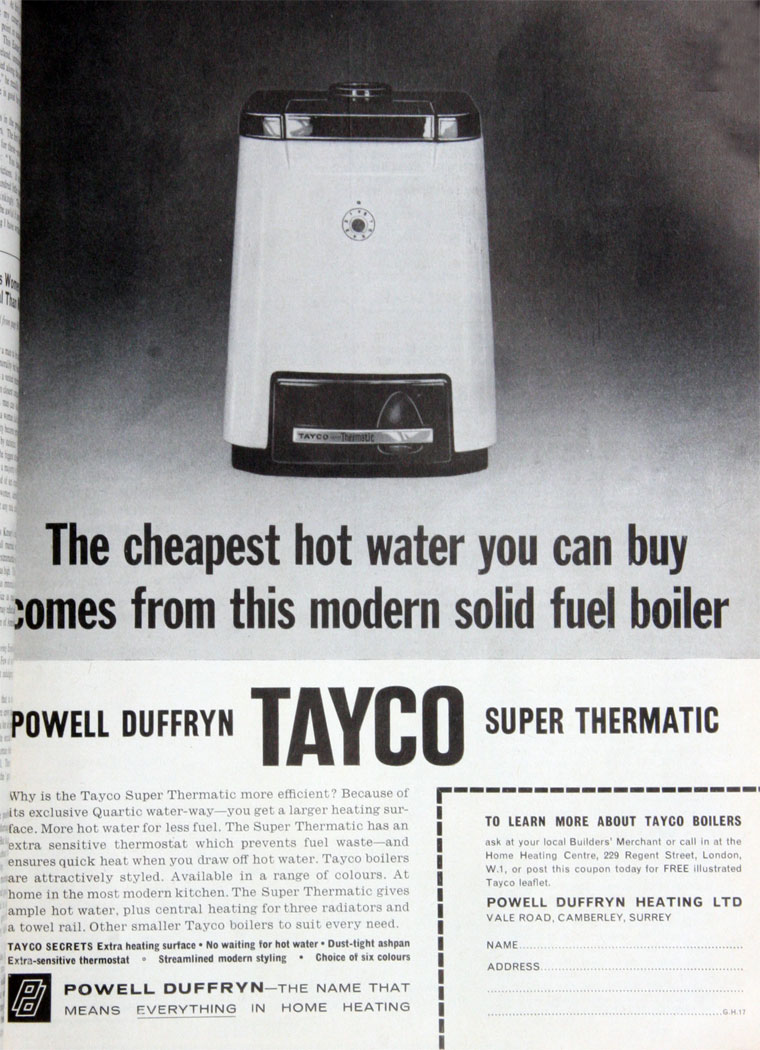 1840 Thomas Powell sunk the first deep mine at Cwmbach, Aberdare.[1]

1840-1863 He opened many further deep mines, both in Aberdare (Cwmdare, Abernant, Abergwawr, Middle Duffryn and Cwmpennar) and in the Rhymney Valley. At their peak these collieries produced over 400,000 tons of coal each per annum.

1864 As a result, George Elliot formed the Powell Duffryn Steam Coal Co Limited (PDSC) for the purpose of working the whole of Thomas Powell's collieries. At this time the wealth of the South Wales Coalfield was only just being realised.

1867 The PDSC bought the Aberaman Estate from the iron master Crawshay Bailey. The acquisition of the Aberaman Estate was an important purchase, as underneath lay some of the best steam coal in the world and all within easy access to the ports. Aberaman became the headquarters of the company.

1914 The market in France was so large that they registered as Compagnie Francaise des Mines Powell Duffryn, with their main offices at Rouen.

1916 An able businessman, E. M. Hann (who had started his career in the company in 1879) was made director of the PDSC and enabled the company to become the greatest coal-producing company in the world.

1944 Formation of Powell Duffryn Ltd and voluntary liquidation of the 3 former companies[2].

1946 Unlike the main coal production business, several subsidiaries were concerned with fuel distribution, and so would not be nationalised - these were Stephenson Clarke Ltd, Gueret, Llewellyn and Merrett Ltd, Cory Brothers and Co Ltd. Powell Duffryn and International Combustion Ltd jointly established Rhymney Engineering Co to take over an engineering works at Rhymney that Powell Duffryn had been operating during the war. The company would manufacture mining machinery, materials handling plant for collieries and power stations, and other specialised engineering products[3]. Delanium Ltd had developed a new method of making carbon.

1947 The National Coal Board took over all Powell Duffryn's coal mining interests but they indirectly retained a considerable influence on the management of the coal industry with many of their management retaining senior level posts with the N.C.B. particularly in the South Wales area. As a result, Powell Duffryn Co diversified and expanded in other directions, including formation of Powell Duffryn Technical Services Ltd, which would provide consultancy in fuel production, distribution and utilization worldwide, and Powell Duffryn Carbon Products Ltd, as well as acquiring a factory unit at Hayes, to commercialise the new carbon product developed by Delanium; the laboratories at Battersea were renamed Powell Duffryn Research Laboratories Ltd[4] [5]

1948 In conjunction with William Cory and Son acquired John Kelly Ltd of Belfast, coal importers of Northern Ireland, and associated companies owned by the Kelly family[6]

1950 Vacuum Oil Co acquired the oil storage, blending packing business at Coryton of Cory Brothers and Co in exchange for shares in Vacuum Oil Co which would be held by Cory's parent Powell Duffryn; together with further investments, this would give Powell Duffryn and Socony-Vacuum Oil Co Inc of USA equal ownership of the Vacuum Co. An oil refinery would be built at Coryton, primarily for the production of lubricating oils[7].

1953 The compensation for nationalisation of the coal interests was finally settled, at £15million[8]

1954 The Coryton Refinery had been delayed in completion and cost more than expected; Powell Duffryn sold its half share in Vacuum Oil Co to Socony-Vacuum[9]

1956 Had negotiated increased compensation for the coal interests of £15.9million[10]

1960 Formed a business in the manufacturing and sale of heating equipment, based on Janitor Boilers Ltd, of which the remaining shares were acquired; extended the Janitor range of oil and anthracite boilers to smaller boilers for 3-4 bedroom houses. Purchased the Hurseal company, makers of pressed steel radiators[15]

1968 Introduction of divisional structure to rationalise the 80 subsidiaries[21]:

1976 Acquired an interest in Humberside Holdings, provider of port services around the confluence of the Humber, Trent and Ouse.

By the early 1980s, the company had worldwide recognition in the field of engineering, shipping (travel), bulk liquid storage, fuel distribution, construction, wagon manufacture to name but a few.

1990 Tried to sell the coal distribution business[30] but failed to attract attractive offers.

2000 The company, a ports operator and engineer company, was acquired by Nikko Securities, a venture capital company[32]