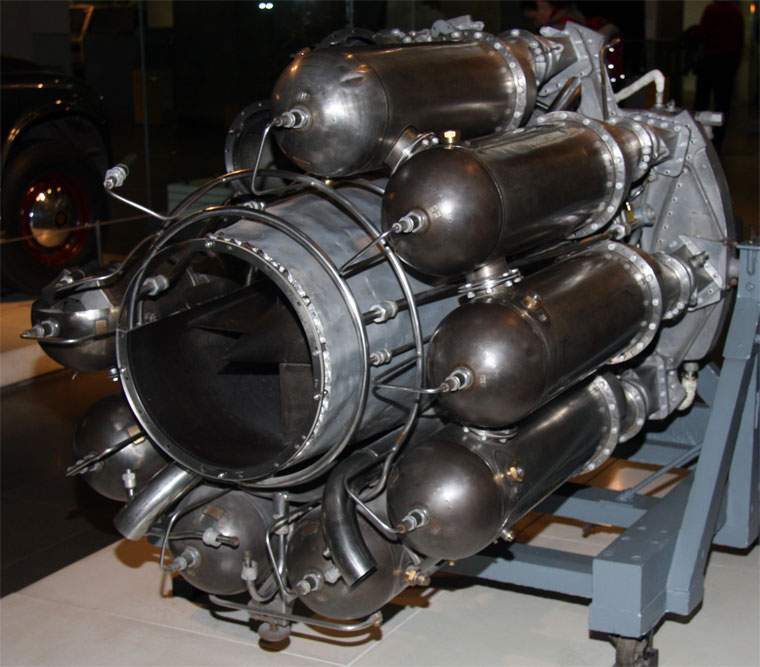 1936 Frank Whittle, Rolf Dudley-Williams and James Collingwood Tinling incorporated as Power Jets with a bank loan of £2,000. Work was started on an experimental engine at a factory in Rugby, Warwickshire belonging to British Thomson-Houston (BTH), a steam turbine company

Power Jets were able to complete the first Whittle Unit (WU), which ran successfully on April 12, 1937. Due to the dangerous nature of the work being carried out, in 1938 development was largely moved from Rugby to the BTH's semi-disused Ladywood foundry at nearby Lutterworth in Leicestershire. There was a successful run of the WU there in March 1938.

Following the outbreak of World War II the Air Ministry changed priorities and once again looked at the various advanced projects underway. By 1939, Power Jets could barely afford to keep the lights on when yet another visit was made by Air Ministry personnel on 30 June 1939 when the Director of scientific research of the Air Ministry visited Lutterworth and witnessed a test run of the WU of 28 minutes duration up to a maximum speed of 16,000 r.p.m.

One of the members of the team was the past-Director of Scientific Research, H. E. Wimperis, who walked out of the demonstration utterly convinced of the importance of the project.

A contract for full-scale development was immediately sent to Power Jets. Power Jets had no manufacturing capability, so the Air Ministry offered shared production and development contracts to various companies to set up production lines for up to 3,000 engines a month in 1942 but only Rover accepted a contract to design and develop the engine for mass production. Whittle himself was not pleased by this; he did not like design changes made without his approval.

Whittle had already studied the problem of turning the massive WU into a flyable design and, with the new contract work, started in earnest on the "Whittle Supercharger Type W.1."

The Air Ministry was eager to obtain an operational jet aircraft and had authorised BTH to press ahead with a twin-engined jet interceptor (which later evolved into the Gloster Meteor). A contract for a simple airframe to carry the engine was taken up by Gloster. The Meteor was intended to use either the W.2 or the similar Halford H.1 (later named "Goblin") but de Havilland later decided to keep all the H.1s for their design, the de Havilland Vampire.

The Ministry of Aircraft Production was established in 1940 and involved both the Rover Company and BTH in the manufacture of the engines. However, Rover was unable to deliver the W.1 production engine before Gloster's experimental airframe was ready. Whittle then cobbled together an engine built from various test parts and called it the W.1X, which ran for the first time on December 14 1940. This engine powered the Gloster E.28/39 for taxi testing when it took to the air for a short hop on April 7 1941.

The "full" W.1 of 3.8 kN (850 lbf) thrust ran on April 12, 1941 and on May 15, 1941 the W.1-powered E.28/39 took off from Cranwell at 7.40 pm, flying for seventeen minutes and reaching a maximum speed of around 545 km/h (340 mph). Within days it was reaching 600 km/h (370 mph) at 7,600 metres, exceeding the performance of the contemporary Spitfires, astounding considering this was the first such engine. Success of the design was now evident to all and nearly every engine company in England started their own crash efforts to catch up with Power Jets.

As a development of the successful W.1 flight engine, Whittle had conceived his W.2 series which would have higher thrust and lower frontal area. Like the W.1 it featured a "reverse flow" design of burners, in which the heated air from the flame cans was piped towards the front of the engine before entering the turbine area. This allowed the engine to be "folded", with the flame cans lying around the turbine area, and therefore making for a shorter engine.

Power Jets continued with engine development, producing the W2/500 and W2/700 designs, which showed greatly improved performance. The aerodynamic design of the W2/700 was adopted by Rolls-Royce for their very successful Derwent V engine, which won a world airspeed record of 606 m.p.h. in a Meteor in 1945.

Power Jets also spent some time in May 1940 drawing up the W.2Y, a similar design with a "straight through" airflow that resulted in a longer engine and (more critically) driveshaft but with a somewhat simpler layout. In order to reduce the weight of the driveshaft as much as possible, the W.2Y used a large cylindrical shaft almost as large as the turbine disk, "necked down" at either end where it connected to the turbine and compressor.

In 1940, Stanley Hooker of Rolls-Royce had met with Whittle and later introduced him to Rolls' CEO, Ernest Hives. Hooker led Rolls' supercharger division, which was naturally suited to jet engine work. Hives agreed to supply key parts to help the project and it was Rolls engineers who helped solve the surging problems seen in the early engines.

In 1941 Rover set up a new laboratory for Whittle's team along with a production line at a disused textile mill in Barnoldswick, Lancashire. The first engine was delivered by Rover for testing by Power Jets in May 1941 but its performance was very poor. A complete revision of the design, known as the W2B, was instituted. The first test engines to the W2B design were built at Barnoldswick in October 1941.

Rover also set up a parallel effort with their own engineers at Waterloo Mill, Clitheroe. Here Adrian Lombard attempted to develop the W.2 into a production quality design, dispensing with Whittle's "reverse flow" burners and developing a longer but simpler "straight-through" engine instead. Work at Barnoldswick continued on Whittle's original design, now known as the W.2B/23, while Lombard's new design became the W.2B/26. Whittle was upset by this course of events, feeling that all work should concentrate on producing a single design as soon as possible.

By late 1941 it was obvious to all that the arrangement between Power Jets and Rover was not working. Whittle was frustrated by Rover's inability to deliver production-quality parts, as well as with their "we know better than you" attitude and became increasingly vocal. Rover was losing interest in the project after the delays and constant harassment from Power Jets.

In early 1942 Whittle contracted Rolls-Royce for six engines as well, known as the WR.1, identical to the existing W.1.

1944 With practically every engine company producing their own designs, Power Jets was no longer able to generate realistic income. In April 1944 Power Jets was nationalized, the private shareholders accepting the sum of £135,563 10s. for the company's assets. A new company, Power Jets (Research and Development) Ltd, was established, and the gas turbine division of the Royal Aircraft Establishment was amalgamated with it. The engine and supersonic aircraft projects were cancelled. The key members of the Power Jets team resigned and were snapped up by industry. The remaining Power Jets offices and workshops became part of the National Gas Turbine Establishment at the original Ladywood experimental site. In 1946 it was reorganised with the RAE divisions joining them.

1948 Whittle, disenfranchised, quit what was left of Power Jets.