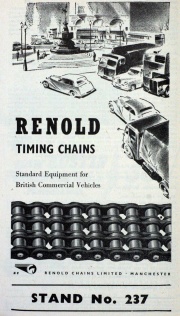 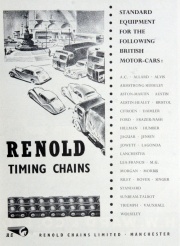 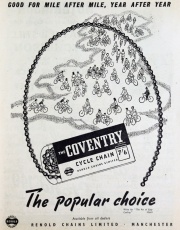 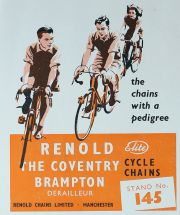 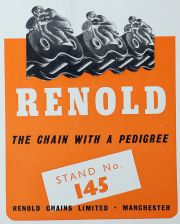 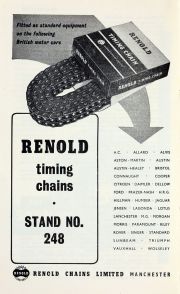 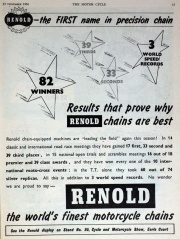 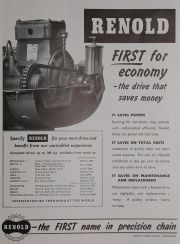 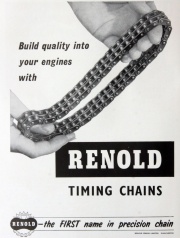 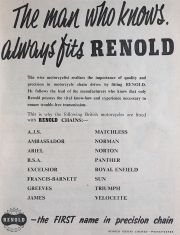 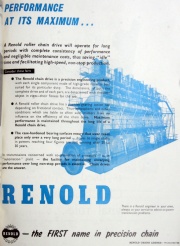 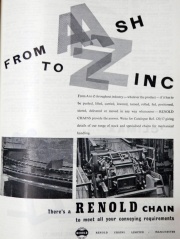 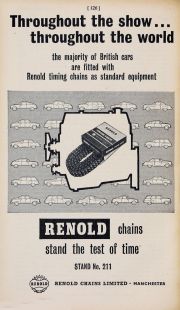 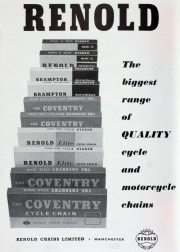 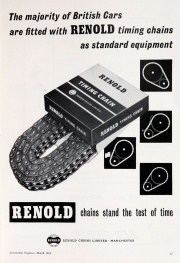 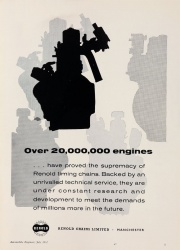 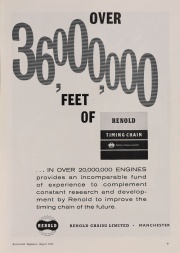 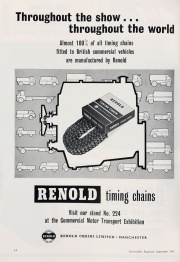 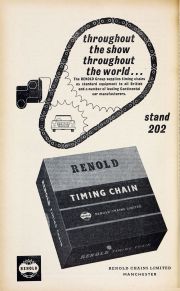 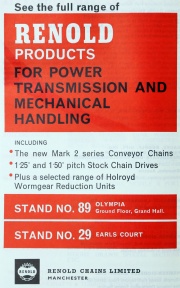 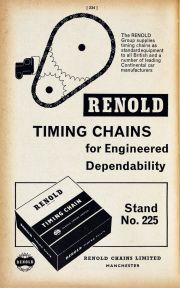 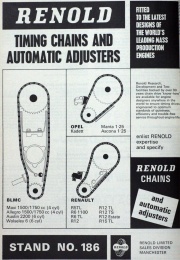 1954 Renold and Coventry Chain Co became Renold Chains Ltd. and introduced their improved design of bi-planar chain with their patent.

1955 A factory in Burton-upon-Trent, Staffordshire, was acquired for the separate manufacture of conveyor chain and agricultural chain machinery.

1956 Renold acquired Anchor Chain Co of Oldham. With the introduction of nuclear power at Calder Hall, Renold Chains entered the Nuclear Age with the supply of control rod lifting chains.

1963 The company acquired the manufacturing companies Manufacture Lilloise de Chaines S.A., of Lille, France, and Arnold and Stolzenberg GmbH of Juliusmuhle, Germany, and established a new wheel manufacturing plant at Charleville-Mezieres in the French Ardennes. Renolds also gained an interest in local manufacture in Spain during this period. Sales companies were established in Spain, in 1962; Austria, in 1964; Denmark (Renold A/S, of Copenhagen) in 1965; Switzerland, in 1968 and Sweden (Renold Svenska AB) in 1969. Outside Europe, the decade saw the formation, in 1968, of Renold (Southern Africa) (Pty.) Ltd., of Pietermaritzburg, South Africa, a chain manufacturing company. This later combined with the former Crofts establishment at Benoni, to form Renold Crofts (South Africa) (Pty.) Ltd.

1963 Renold acquired Arnold and Stolzenberg GmbH of Einbeck, one of the largest and oldest-established chain manufacturers in Germany.

1964 A significant strategic development of the Renold Group was the acquisition of John Holroyd and Co and this marked the start of the transition from purely chain manufacture to manufacture and supply of a complete range of power transmission products and precision machine tools. Further acquisitions brought more gearing, couplings, clutches, brakes, variable speed drives and various hydraulic products into the Group.