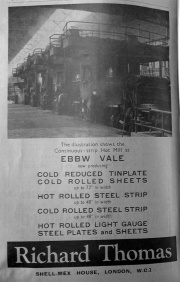 1871 Richard Thomas spent time as the general manager and secretary at the Ynyspenllwch Ironworks before the formation of Richard Thomas and Co to acquire and run the idle Lydbrook tin plate works in Gloucestershire.[1]

1883 Financial difficulties and eventual liquidation, due mainly to problems of flooding at the colliery.

1884 Relaunched the company with the help of the Barrow Hematite Steel Co with Thomas as managing director of the new concern and his eldest son, Richard Beaumont Thomas, as general manager. Incorporated as a limited company.

1888 he acquired, in conjunction with William Thomas Lewis and others, the Melingriffith Tin Plate Works on the outskirts of Cardiff.

By 1916 the various companies associated with Richard Thomas and Co employed over 11,000 workers and controlled a quarter of the tin plate mills in South Wales.

1917 Took over the Cwmfelin Steel and Tinplate Works.

1923 The South Wales Tinplate Corporation was registered - which represented a selling organisation for: [3]

1923 Largest tinplate makers in the world; owned 14 tinplate works with 111 mills, capacity of 4,500 tinplate and 6,500 tons of steel per week. Working arrangement agreed with Grovesend Steel and Tinplate Co[4] which led to purchase of control of Grovesend[5]

1927 See Aberconway Chapter IV for information on the company and its history.

1927 See Aberconway Chapter XVII for information on the company and its history.

1931 The other 4 works resigned from the South Wales Tinplate Corporation.

1933 Agreement with Whitehead Iron and Steel Co to supply billets from Redbourn works at Scunthorpe to that company's Newport rolling mills; Mr L D Whitehead to join the Richard Thomas and Co board[9].

1933 A jointly-owned company was formed by Whitehead Iron and Steel Co and Richard Thomas and Co called Whitehead Thomas Bar and Strip Co[10]. This company would operate a finishing mill at Redbourn, equipped by transferring the semi-continous mill from Whitehead's Tredegar works[11]

1936 The company decided upon a huge programme of extension which included the modernisation of the Redbourn Steel Works and the purchase of the Ebbw Vale Steel, Iron, and Coal Company. Sir William Firth, Chairman of Richard Thomas and Co announced that his company had purchased the assets of the Ebbw Vale Steelworks and that the first continuous hot strip mill outside the USA would be located there[13]. However, this put the company in financial difficulties, partly as a result of the collapse of the boom in the steel trade.

The banks came to the aid of the company - control of the company was vested in the hands of a Special Committee of four, with the Governor of the Bank of England as Chairman. Other directors were appointed who were also directors of well-known iron and steel companies.

1940 Sir William Firth left the Board of Richard Thomas and Co., Ltd. as the result of an irreconcilable difference within the Board.