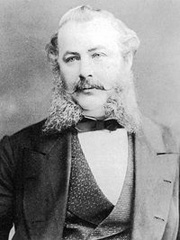 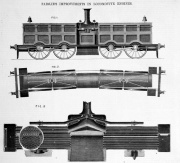 Robert Francis Fairlie (1830-1885) was a railway engineer known for patents for the double-bogie double-ended locomotives for narrow gauge railways (see the Ffestiniog Railway).

He also wrote a number of books on the railways. [1]

A 'Fairlie' is a type of articulated steam locomotive that has the driving wheels on bogies. The locomotive may be double-ended (a double Fairlie) or single ended (a single Fairlie). Fairlies are most associated with the Ffestiniog Railway in Wales. While the Fairlie locomotive has all but disappeared, the vast majority of diesel and electric locomotives in the world today follow a form not very different from the Fairlie — two power trucks with all axles driven, and many also follow the Fairlie's double-ended concept, being capable of driving equally well in both directions. [2]

The "Modified Fairlie" locomotive was patented in 1872 by Robert Francis Fairlie of Westminster conjointly with Loftus Perkins of Kings Cross, and comprised the features patented by Fairlie in 1864, 1865, 1867 and 1869, together with the three patents by Loftus Perkins in 1870. The vehicle and all its articulations were by Fairlie.[3]

Fairlie was the son of T. Archibald Fairlie (an engineer) and Margaret Fairlie.

1852 He trained at Crewe and Swindon, then joined first the Londonderry and Coleraine Railway as Locomotive Superintendent and four years later the Bombay, Baroda and Central India Railway.

1859 Established himself as a railway engineering consultant now back in London.

c. 1862 Eloped with Eliza Ann England, daughter of George England, who sued Fairlie for perjury, on the grounds that Fairlie had not, as claimed, received her father's consent to their marriage, but the case failed.

1864 and 1865 Fairlie patented his ideas for an articulated locomotive intended to meet the problems of railway operation in mountainous areas, with sharp curves and steep gradients, at the same time reducing the need for heavy expenditure on civil works and permanent way.

1865 The first two locomotives built under the Fairlie patents were for the Neath and Brecon Railway and (1866) the Anglesey Central Railway by J. Cross of St Helens, but 3 following locomotives were not satisfactory

1869 Hatcham Ironworks was taken over by Fairlie and partners which completed the loco for the Ffestiniog. The performance of "Little Wonder" demonstrated the practicability of low-cost narrow gauge railways to carry substantial loads in difficult terrain. Many Fairlie-type locomotives were built in the UK and abroad.

Early 1870s Fairlie's business had become a design agency called the Fairlie Engine and Steam Carriage Co, with its locomotives being built by the Vulcan Foundry, the Avonside Engine Co, and Yorkshire Engine Co to virtually standard designs

1872 Patent for the invention of "improvements in apparatus for the extraction of nitrate of soda from crude nitrate earth stone usually called caleche."[8]

1885 Died; civil engineer, of Clapham Common; widow: Eliza Anne Fairlie[9]. His business interests were continued by his children, three of whom made their lives in Peru and Chile.