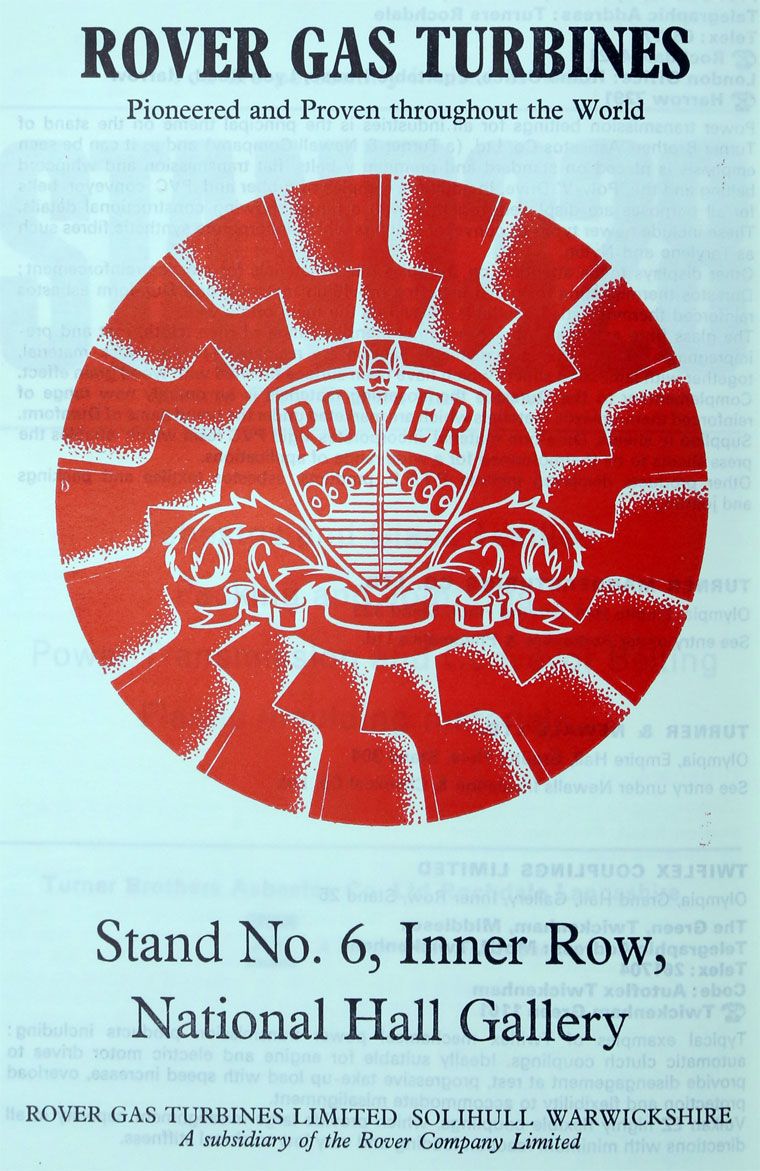 1950 Rover built the first gas-turbine powered car: Jet One[1] with a T8 gas turbine fitted in a Rover: P4 car.

A new gas turbine was developed that could develop 60 hp - this was called the 1S/60.

1961 A third version of the gas turbine car was shown at the Motor Show, the Rover T4.

1963 The Rover-B.R.M. Gas Turbine Car, a joint product of Rover and the Owen Organisation, was shown at the 1963 Motor Show. It was the first gas-turbine car to complete the Le Mans 24 hour race but not as a contestant.

1964 The car was fitted with a regenerative heat exchange to improve fuel efficiency. It was also fitted with multiple nozzles in the turbine so that the driver did not have to keep the turbine powered whilst braking[4] but did not context the Le Mans race because of unexplained hairline cracks of the rotor.

1965 A regenerative heat exchanger was fitted to the Rover B.R.M car (with Rover 2S/150/R engine) entered in the Le Mans 24 hour race[5]. It was the first British car to cross the finish line.

A scaled-down version of the S2 power plant, the Rover 2S/75, was the basis of Rotax's CT2023 unit and Lucas's CR201 unit. The gas generator section of this engine formed the basis of the Rover TJ125 minijet engine

1974 The schedule for bringing the truck into production was slowed down[11] because of the need to develop a version of the engine operating at higher temperature, which would need new materials[12]

The Rover/Lucas S2, a twin shaft gas turbine engine, was developed from the famous Rover P6 gas turbine, the engine that almost made it as the world's first automotive gas turbine. The engine was later used as a compressor unit for the Nimrod aircraft and also as an Auxiliary Power Unit in the HS748 aircraft.