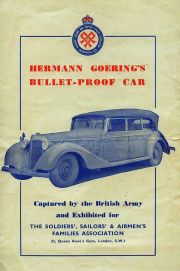 1950 'GORING'S CAR ON VIEW. — An attraction for Edinburgh holiday crowds yesterday was the five-ton Mercedes-Benz car which belonged to Goring during the last war. There were queues during most of the day at the S. M. T. Sales and Service showroom in Lothian Road of people waiting to see the car, which is complete with effigy of the Field-Marshal. The car, which will be on view at the showroom until Saturday is now owned by the Soldiers and Sailors and Airmen's Families' Association, and has been brought to Edinburgh with the object of raising funds for the association. It took careful manoeuvring to get the car, which is 20 feet long, into position in the showroom. The car is powered by an eight cylinder double-plugged engine normally developing 155 h. p., but rising to 230 h. p. when the supercharger is in use. The bodywork, is heavily armoured, and there is a mine shield below the body. The windows and windscreen are of bullet-proof Jena glass, now splintered as a result of point-blank firing by disbelieving, soldiers. The exhibition of the car was opened yesterday by Vice-Admiral A. B. Cunninghame-Graham, Flag Officer, Scotland.'[1]

1957 Shaw and Kilburn was also acquired by Sears and became a subsidiary[3]. Both SMT and Shaws were dealers in Vauxhall cars and had suffered from interruptions in supply[4]

Within Sears Holdings, SMT were vehicle dealers in Scotland and Shaw and Kilburn dealers in England

1966 Scottish Motor Traction Co., including Shaw and Kilburn and S. M. T. Sales and Service, were transferred from Sears Holdings to Sears Engineering[6]