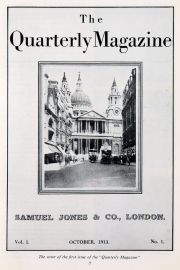 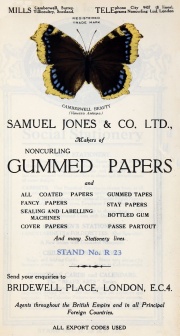 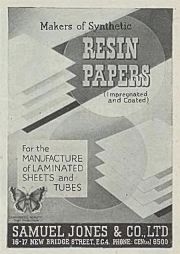 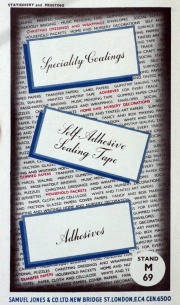 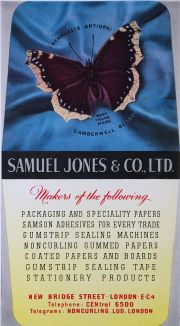 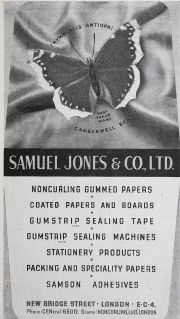 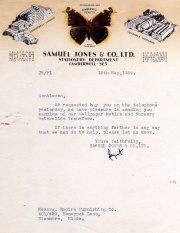 May 1954. Letter Sent By Samuel Jones and Co to Empire Furnishing Co. 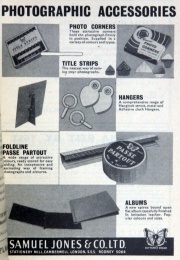 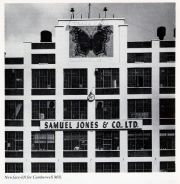 Mills also at Letchworth and St Neots and Ware

Samuel Jones ran the company for a further six years before he relinquished control of the organisation to his son James. However the company continued under Samuel’s name and thrived from its Peckham base.

1905 The factory acquired patents that allowed it to start producing non-curling gummed paper. This enabled the firm to produce blank paper with a gummed back, as opposed to putting the gummed adhesive on printed sheets. (The gummed paper was predominately used for posters but also used on stamps, and in more recent incarnations such as post-it notes and stickers). The paper was mass produced and distributed to printers to use as they wished. Business increased and the company expanded.

1912 The factory and firm adopted the Camberwell Beauty butterfly emblem. (Two specimens were first caught in England in 1748, in Coldharbour Lane). The firm adopted the logo to demonstrate the possibility of printing several different colours on one piece of paper.

By the 1920s the factory at 67 had expanded into a complex of buildings that spanned Southampton Way and was one of the key employers in the area.

1924 Acquired Samuel Jones and Co (Devonvale) Ltd, a company formed in 1920 jointly with a Scottish producer.

1945 They became the first company to produce self-adhesive labels in the UK.

1960s They worked with London Transport to develop oxide ticket material which was used for tube and bus tickets. They also experimented with the development of fire extinguishers, and own patents in this area.

1966 Samuel Jones and Co became part of the Wiggins Teape Group and, in turn, part of Princeton Packaging.

c.1804 The first British paper-making machine was built for the Okestubbe Mill near St. Neots in Huntingdonshire, which enabled paper to be produced very much more rapidly.