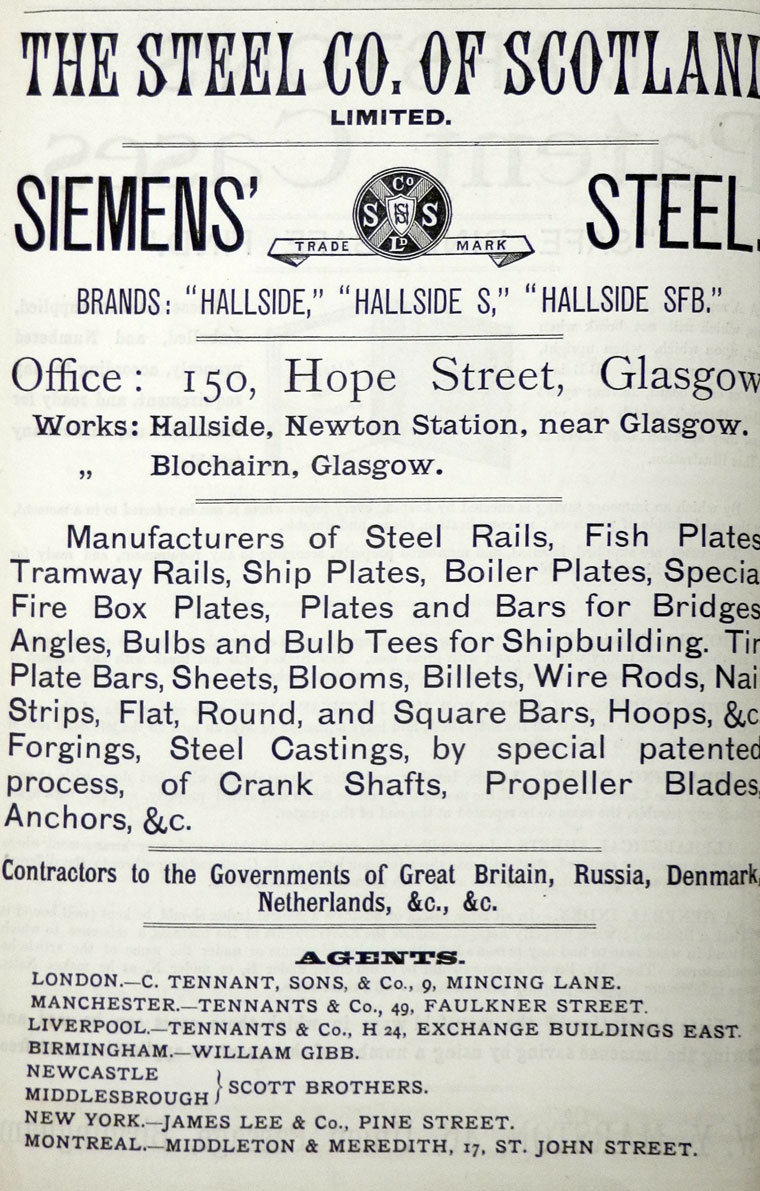 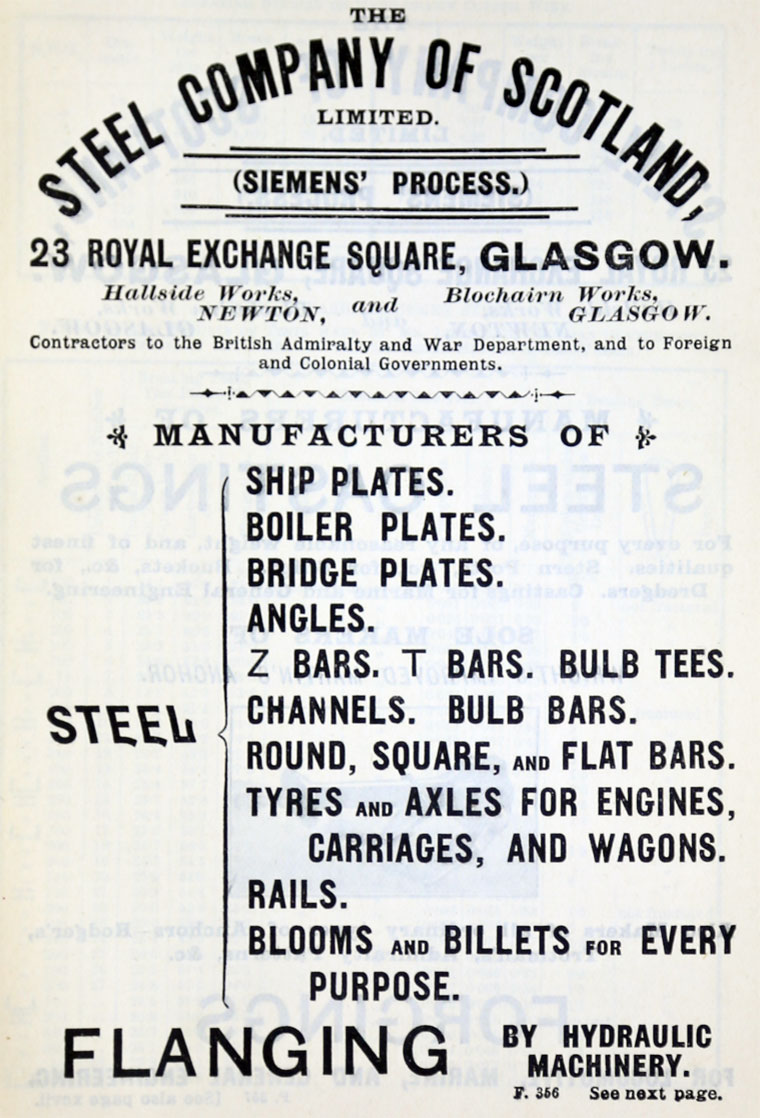 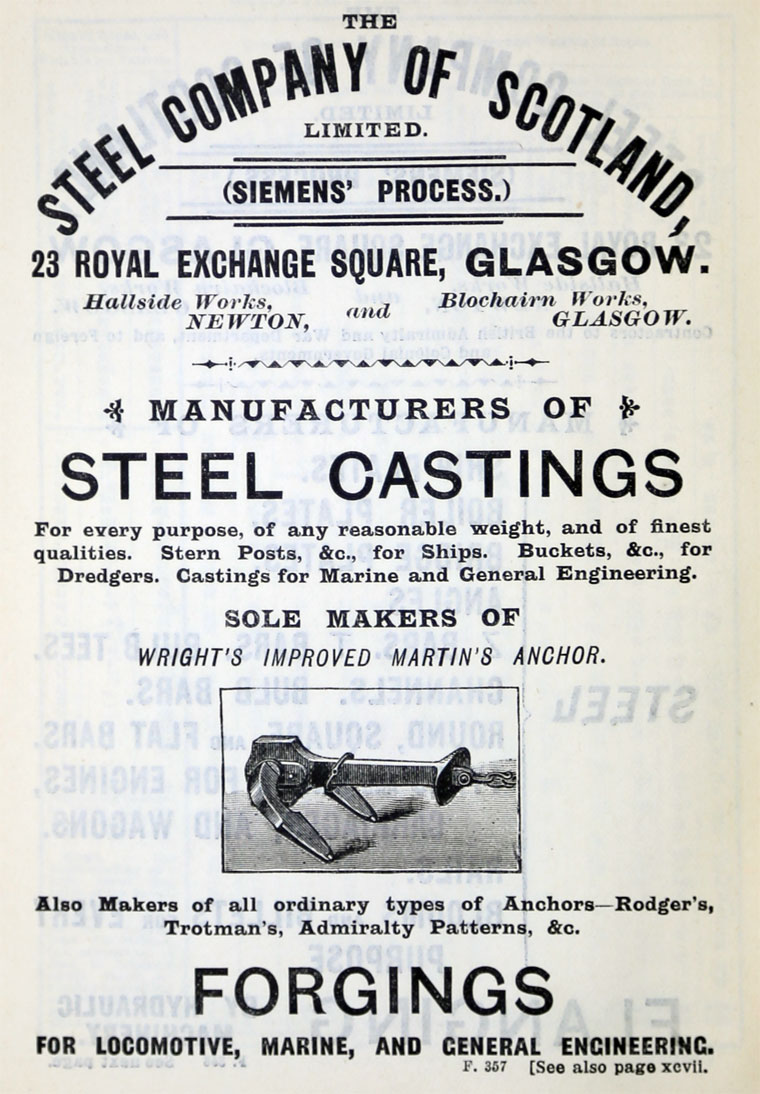 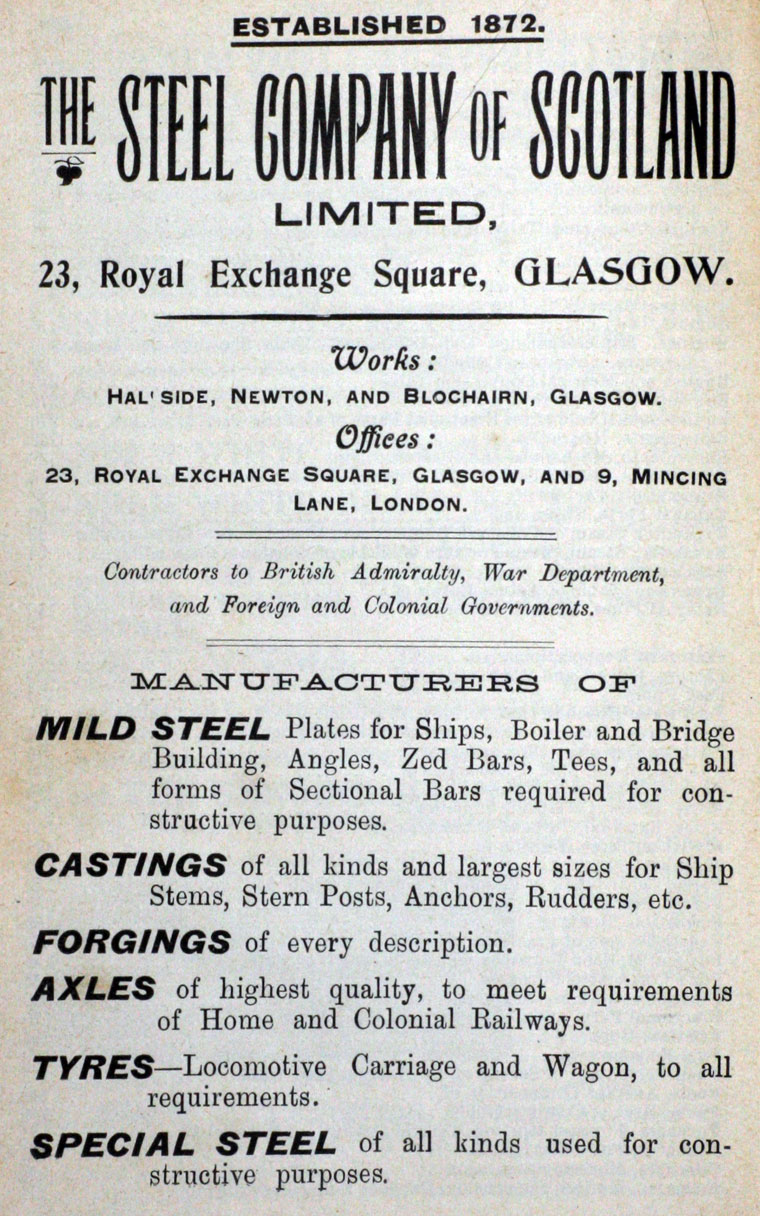 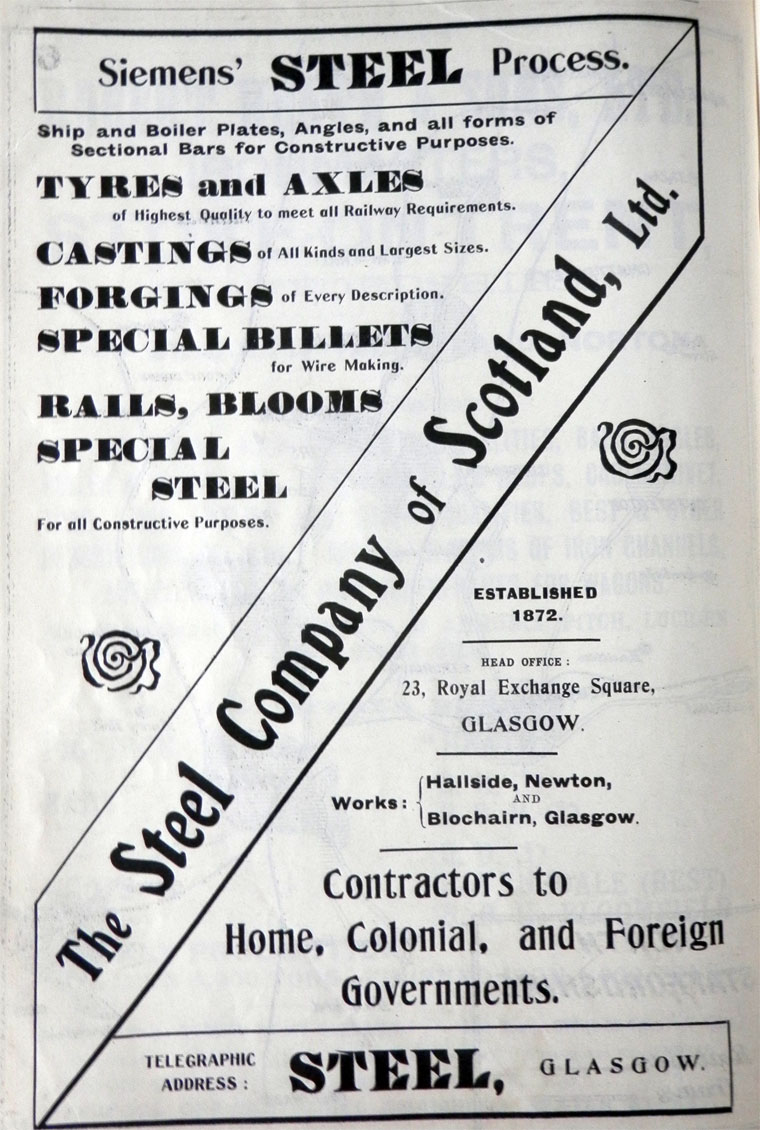 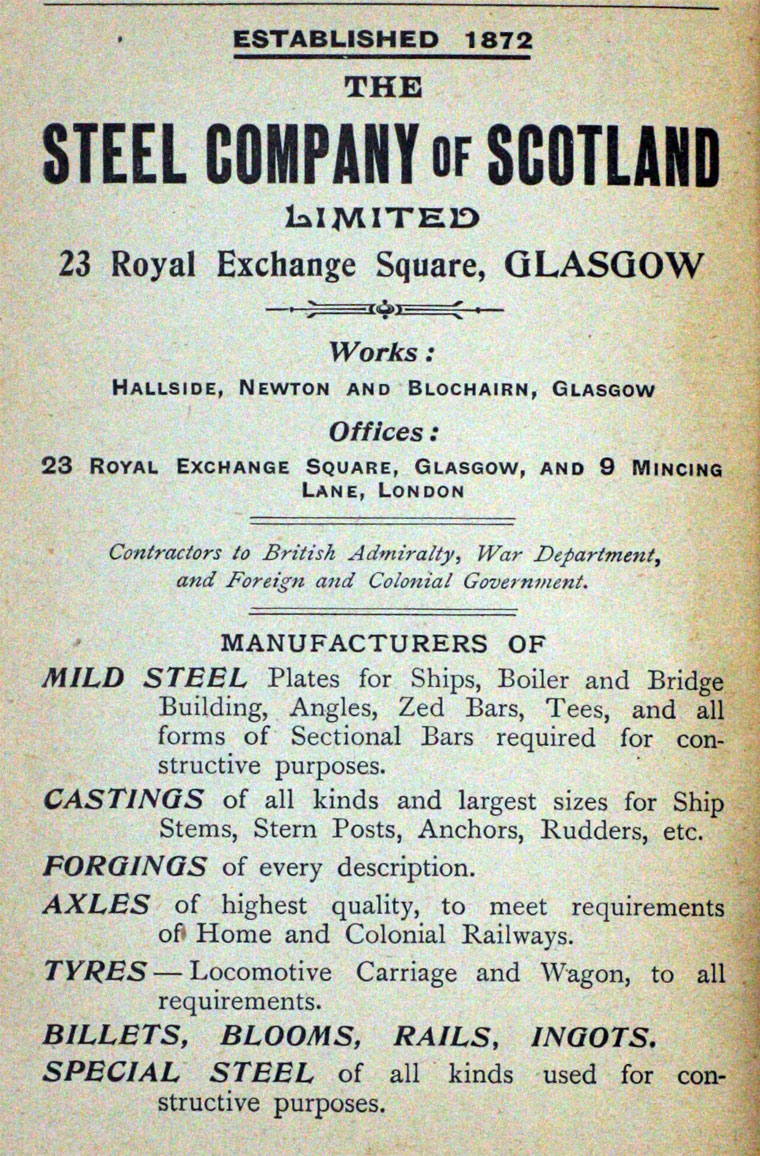 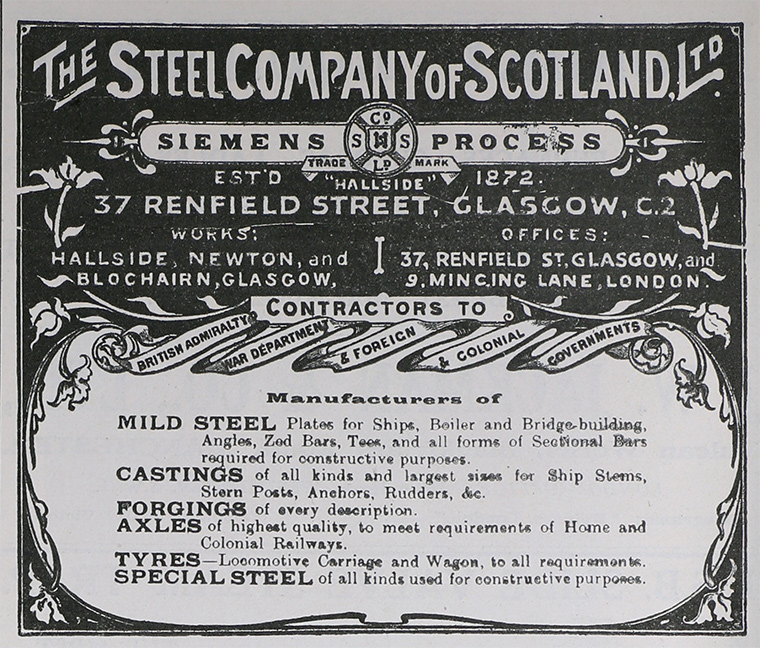 of Hallside, Newton Station, and Blochairn, Glasgow, a producer of steel.

Scotland was an early adopter of Siemens' open hearth furnace, first at the Atlas Works in Monklands, and then on a larger scale when the Steel Company of Scotland was formed at Hallside [2].

1867 The Tharsis Company, one of the companies of Sir Charles Tennant, initiated experiments with a view to utilising the residue from its treatment of pyrites; the experiments were carried out at the works of Messrs. Rowan and Co., Glasgow, in a specially built Siemens furnace, and encouraged the belief that steel suitable for rolling into rails could be manufactured from the residue.[3]

William Siemens conducted the experiments to see if his new open-hearth furnace could deal with the iron by-product of the pyrites process. On the strength of Siemens's encouragement, Sir Charles Tennant and his friends decided to embark on a full-scale steelworks and commissioned Siemens to design it (Newton Steel Works), the idea being to use conventional materials to start with. In the event, the metallurgical techniques proved inadequate to deal with the iron from pyrites but the Siemens plant was so successful with conventional materials that it launched Scotland as a steel-producing nation.

1872 The company was registered on 9 February [4]. Colonel J Roper Wright supervised the works; Wright had worked at the Sample Steelworks at Birmingham with William Siemens (where Siemens had demonstrated his regenerative furnace) [5]

When the demand for rails fell off, shortly after Hallside started, they turned to the manufacture of plates, bars, castings and forgings.

The shipbuilders on the Clyde were quick to adopt open-hearth steel. Although it was up to 50% more expensive than malleable iron it had better properties and was a more reliable product than Bessemer Steel. Once it was approved by the Chief Naval Architect of the Royal Navy in 1876 the market was created. This was also an advantage to Scotland as the Bessemer process had not been very successful with the local Scottish iron ores whilst the Siemens process gave Hallside an advantage in quality. By the early 1880s, almost all ships built on the Clyde were built of steel - no other British shipbuilding area made the switch from iron to steel so rapidly and Hallside was equipped to meet the demand [6].

1877 A plate mill was installed to satisfy the emerging demand for plates from ship builders.

By 1878 the Steel Company of Scotland, still the only Scottish producer of open-hearth steel, had 14 open hearth furnaces (10 of 6 ton capacity and 4 of 10 tons). At the time there were 90 such furnaces in Britain, 42 of these in Wales.

1878 James Riley, an influential mechanical engineer, came to Hallside as Manager from Landore where he had been General Manager under Siemens. There he had met Nathaniel Barnaby's challenge for a uniformly tested steel for shipbuilding. Despite a trade depression, he added to Hallside's range with heavy angles, tee-bulbs and tinplate bars.

In 1880 the Steel Company built 4 more furnaces at Hallside and purchased the Blochairn Iron Works, previously operated by Hannay and Sons. The aim had been to close the works and move the equipment to Hallside. However, after James Riley had examined the works, he persuaded the directors to convert the works to production of Siemens open-hearth steel. 8 furnaces were erected. James Riley was responsible for many important developments in the making and rolling of steel.

The Steel Company of Scotland at Hallside had an initial monopoly over the market for open hearth steel. However, because of the demand from the shipyards, other steelworks were started and some malleable ironworks changed to steel production.

1920 In the postwar boom, a group of shipbuilders approached the Steel Company of Scotland in 1920 and suggested purchasing a controlling interest, which was accepted.

By 1924 the demand for steel for ships had slumped. Hallside survived by turning its hand to a variety of products which the larger works could not do so easily.

1934 business picked up. Lithgows gained control. Two years later the company was sold to Colvilles in order to rationalise the industry in Scotland.

WWII Made shell casings as well as supplied shipyards.

1958 Continued operating as the poor relation of the Colville group until 1958 when the plant was closed.