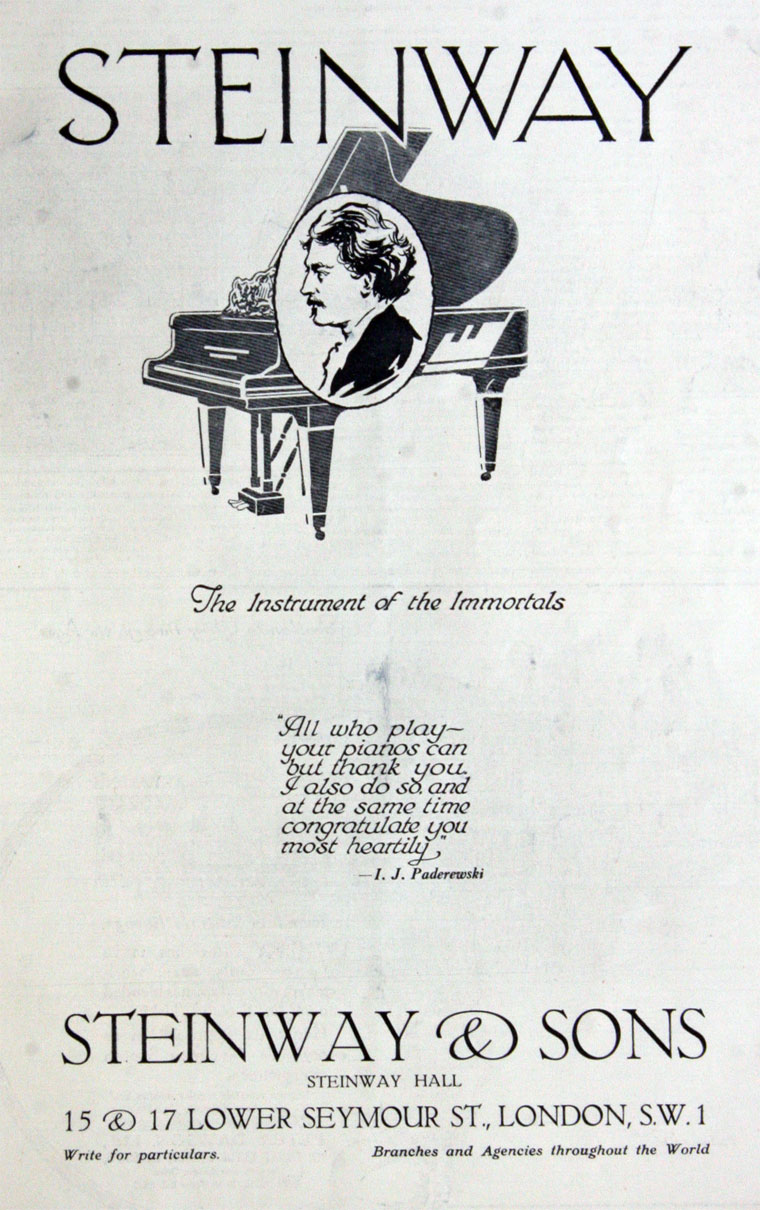 1853 The company was established by Heinrich Englehardt Steinweg, a German cabinet maker, who had emigrated, and four sons at New York. The first piano produced by Steinway and Sons was given the number 483 (Steinway had built 482 pianos before founding Steinway and Sons). It was sold to a New York family for $500, and is now displayed at the Metropolitan Museum of Art in New York.

By 1863 Steinway and Sons was the world's largest piano manufacturer.

1871 Henry Steinway died and was succeeded by his sons, C. F. Theodore and William Steinway.

1875 William Steinway helped the company to establish a showroom in London.

1877 The London branch was established. Steinway Hall was one of the favourite West End halls for high-class concerts and piano recitals.

1880 A Steinway Village was founded as its own town in what is now Astoria, providing a new factory with its own foundries, post office, parks and housing for employees.

1896 William Steinway died and was succeeded by his nephew Charles H. Steinway.

1914 Pianoforte manufacturers. Specialities: highest class of pianos, over half the output consisted of "Grands". The Steinway Pianofortes enjoy a universal reputation and have received the unqualified commendation of the most distinguished virtuosi, including Liszt, Rubinstein, Paderewski, D'Albert and many others. About this time, the firm introduced the Steinway Welte reproduction instrument which reproduces the playing of famous artists. Employees 1,570. [1]

During WWII the Steinway Factory in New York received orders from the Allied Armies to build wooden gliders to convey troops behind enemy lines. Few normal pianos could be made, but one particularly special model was built, the Victory Vertical. It was a small olive green piano with matching stool, designed to be launched from an aeroplane with a parachute, in order to bring music to the GIs. The factory in Hamburg, Germany, being American-owned, made very few pianos: no more than a hundred pianos per year left the factory. In the later years of the war the company was ordered to give away all the prepared and dried wood from the lumber yard for war production. In an air raid over Hamburg the factory was hit by several Allied bombs and was nearly destroyed.

1973 Prime Minister Edward Heath bought one with the £450 he had won in the Charlemagne Prize for leading Britain into the European Economic Community and put it in 10 Downing Street.

1985 CBS sold Steinway, along with Rodgers (classical organs) and Gemeinhardt (flutes and piccolos) to a group of investors, Steinway Musical Properties Inc

1988 Steinway and Sons made their 500,000th piano, making a milestone in the history of musical instruments. The piano was built by the Steinway factory in New York with some participation from the Hamburg Steinway factory. The 500,000th Steinway was designed by artist Wendell Castle and was named "The grand of the artists". All the 800-plus Steinway Artists signed the piano with their names, including Vladimir Horowitz and Elton John.

1997-1999 The Steinway Musical Instruments company acquired the flute manufacturer Emerson in 1997, then piano keyboard maker Kluge in 1998, and the Steinway Hall in 1999.

2008 Until his death on 18 September 18 at the age of 93, Henry Z. Steinway, the great-grandson of the founder, still worked for the company and had put his signature on custom-made limited edition pianos. Today, the company makes 5,000 pianos for sale a year.