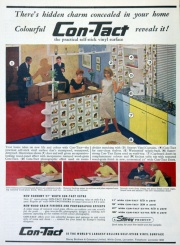 1851 Testified that use of a Fire Annhilator helped deal with a fire in the floor cloth manufactory at Lancaster[3].

From 1851 the business developed into other departments, and works were established in Germany as well.

By 1900 Rembrandt was producing gravure prints commercially and in large quantities. The firm enjoyed a de facto monopoly for several years.

1902 Company incorporated to acquire company of the same name[6].

1902 The company was registered on 12 December, to acquire the business of cotton spinners of a company of similar title. [7]

1926 the company moved to London but was relatively unsuccessful in developing new techniques.

Post-WWII: installed an electrostatic plant to make artificial suede. Also started to make vinyl plastics to which the company applied its printing experience.

1961 Makers of various plastic films and other goods including Con-Tact self adhesive plastic and washable Storoglaze wall covering, Plastolene products made from Terylene, Plastolam for laminates and Plastovac for vacuum coverings[10].

1977 The Brantham and parts of the Aycliffe factories previously operated by Bakelite Xylonite were purchased by Storey Brothers, formerly a major commercial rival.

1977 Turner and Newall took over Storey Brothers in an agreed bid[11].

The Brantham site now operates as part of the Wardle Storeys Group, manufactured limited quantities of xylonite using traditional processes and equipment until the 1980s.