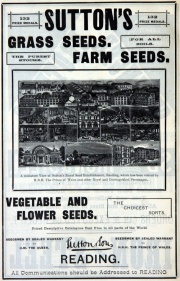 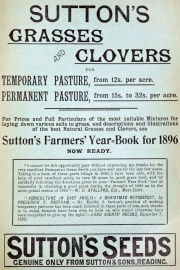 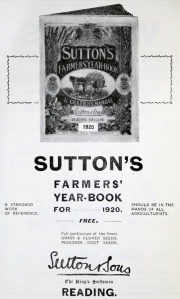 1806 The company was founded by John Sutton who named it the House of Sutton.

1832 Sutton was joined by his sons, Martin Hope and Alfred.

1837 The business was transferred to the Market Place, when they persuaded their father to launch out into the flower and vegetable seed trade. From this time on the firm progressed and expanded rapidly.

1836 Martin Hope, aged 21 years, became a partner and the House of Sutton became Sutton and Son.

1838 Martin Hope opened a nursery and greenhouse and was soon selling greenhouse plants.

1840 The decision was taken to establish a laboratory so they could test the seed themselves for germination and purity. Sutton's seed-testing station was one of the first to be licensed by the Government.

1858 Suttons received Royal patronage, when Queen Victoria requested Martin Hope Sutton to supply seeds to the Royal household; the honour of the Royal Warrant has been bestowed on the firm ever since - right up to the present day with Her Majesty the Queen.

1873 The company expanded further, and new offices and warehouses replaced the original premises in Market Place, Reading. These premises had various offices - including Export, Ledger, Order, Invoice; separate store rooms for flower & vegetable seeds, bulbs, potatoes, grass and root seed, farm seed; along with recreation rooms, an exhibition department and even their own fire station which came with cottages for the firemen!

1962 Suttons moved again to new premises on the then main London-Bath (A4) road. At the time the premises were the most up-to-date of their kind in the country.

1965 Suttons were the first company to offer foil packets to the amateur gardener in the UK , after they developed their Harvest Fresh Foil seed packet system over many previous years.

1976 The company relocated to Torquay in Devon from Reading.

1998 In December, Suttons moved to brand new premises in Paignton where all packaging and distribution is carried out.

2008 Suttons is part of the international company Vilmorin who are the largest packet seed distributors in the world. Vilmorin also owns Carters Seeds. [1]