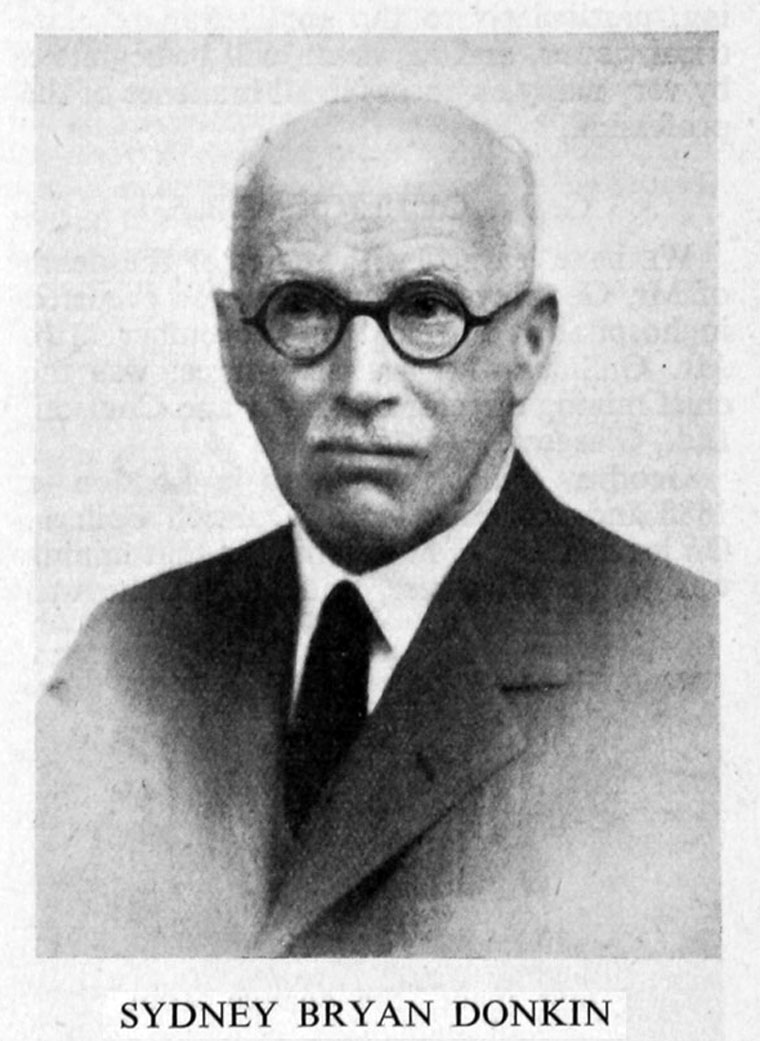 1889 Served an apprenticeship with Bryan Donkin and Co, of Bermondsey, of which his father, Bryan Donkin, Junior, was then chairman.

1892 Spent a year in Switzerland mostly with the Sulzer company, in Winterthur

1893 Returned to England and rejoined Bryan Donkin & Company as a draughtsman, later becoming assistant to the manager.

1897 left Bryan Donkin and Co to become an assistant engineer at Kennedy and Jenkin.

1908 Became a partner in the business

1934 Became senior partner on the retirement of John MacFarlane Kennedy, son of the founder.

It is with regret that we have to record the death of Mr. S. B. Donkin, which occurred at Winterfold, Albury, Surrey, on Wednesday, November 12th, at the age of eighty-one.

He was the senior partner of Messrs. Kennedy and Donkin, of Westminster, the well-known firm of consulting engineers. Sydney Bryan Donkin was born on June 24, 1871, and received his engineering education at University College, London.

He served an apprenticeship with the Bryan Donkin Company and with Sulzer Brothers, of Winterthur, and in 1897 he became an assistant to Sir Alexander B. W. Kennedy, who was then in practice as a consulting engineer.

Mr. Donkin was taken into partnership in 1908, and in 1913 the firm became known by its present title of Messrs. Kennedy and Donkin. Much of Mr. S. B. Donkin's work was concerned with the design of electricity generating stations, both thermal and hydroelectric, and of systems for the transmission and distribution of electric power. The works with which he was associated make an impressive list, including many major schemes well known to the world at large, as well as to the engineering profession. To take one aspect of his work, that of hydroelectric construction, it may be mentioned that he was a member of the Egyptian Hydro-Electric Power Commission, and was one of the engineers appointed in 1943 to re-examine the Severn barrage scheme. Earlier in his career he was concerned with the plant and transmission of power for the Foyers hydro-electric scheme at Kinlochleven, and he also contributed to the design of a hydro-electric development scheme in Japan, and the Uhl River scheme in the Punjab. In more recent times, his firm has been consulting engineers for the electrical and mechanical aspects of many of the schemes of the North of Scotland Hydro-Electric Board, including the Sloy and Affric developments, as well as for the Owen Falls hydro-electric scheme in Uganda and the Aswan hydro-electric scheme in Egypt.

However, Mr. Donkin's work was not by any means confined to hydro-electric design. His firm were the consulting engineers for the Central Electricity Board's grid scheme and for several regional schemes of this nature, and has been engaged in work for the British Electricity Authority since its formation. During the course of his career Mr. Donkin was concerned with power stations at Calcutta and Rangoon, and at Grove Road, Wimbledon, and Deptford, in London, to give only some examples. He was also interested in railway electrification, being concerned with the substations and distribution and power stations for this work.

Mr. Donkin was a full member of all three of the major engineering institutions. He became an associate member of the Institution of Civil Engineers in 1898, a full member in 1912, and was elected president for the session 1937-38. His presidential address was devoted to the progress of the application of electrical power, and the address contains many generalities and predictions of future trends that are not without interest to-day. He opened his remarks by quoting from an essay on applied science written by Shelley in 1810, in which the use of electricity had been discussed. Now, most of the things Shelley thought of had been done, Mr. Donkin noted, and mankind had benefited. Man had become a more efficient unit, he said ; he performed more work in a given time, he lived longer, and he had greater comforts. But with all these advantages, Mr. Donkin continued, it was a misfortune that the necessity still arose for some to spend their energies and the wealth of their country in fruitless endeavours to kill, or to be ready to kill, their enemy in less time and at less cost than was possible for their adversaries.

He found that the records kept by Professor Kennedy showed that, in the steam generating stations of the Westminster Electric Supply Corporation, Ltd., in 1891, the average consumption of coal was 10 lb per kilowatt-hour sent out and the works cost of generating those units with good Welsh coal was about 5d. per unit. In 1936 those figures were 0.97 lb and 0.2d. for a power station with a thermal efficiency of 27.63 per cent. He outlined the various stages by which this development had been achieved, and by which future progress in the use of electricity as a commodity would, in his opinion, be furthered.

Apart from his presidency of the "Civils," Mr. Donkin was a vice-president of the Institution of Mechanical Engineers. He was president of the Association of Supervisory Electrical Engineers in the years 1928-31, and was twice chairman of the Association of Consulting Engineers in 1927 and in 1943-44, and was a Fellow of University College. He served on committees of the British Standards Institution and of the Department of Scientific and Industrial Research, and was a member of the General Board of the National Physical Laboratory from 1922 to 1927. Mr. Donkin was also a member of the Newcomen Society and of the Smeatonian Society of Civil Engineers.

The great variety of Mr. Donkin's interests in the engineering world will be evident from the foregoing account of his activities. He made a significant contribution to engineering, particularly to the application of electrical power, and his death will be regretted by very many engineers in all branches of the profession.