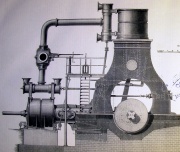 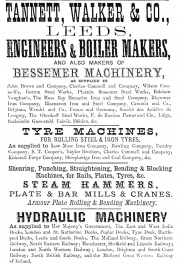 1888. Crane plaque above. Located in Porto Antico, in Genoa, Italy. Restored by a local company in 1992. 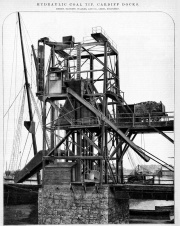 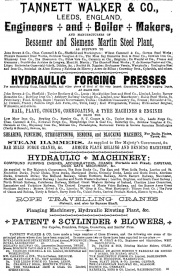 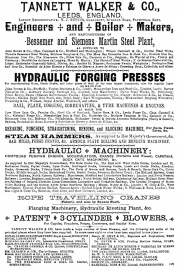 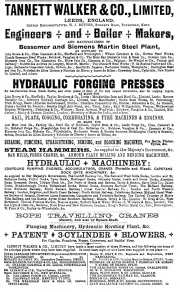 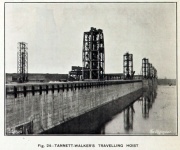 of Goodman Street, Leeds, maker of hydraulic pumps and engines

1868 Constructed a reversing rolling mill engine for the Freedom Iron and Steel Co of Philadelphia, USA, under the supervision of James Livesey of Westminster. Two cylinders of 36" bore, 4 ft stroke.[1]

1869. Partnership change. '...the Partnership heretofore subsisting between us the undersigned, Robert Tannett, Benjamin Walker, John Frederick Augustus Pflaum, and James Craven, carrying on business together as Engineers and Tool Makers, at the Goodman-street Works, in Hunslet, in the borough of Leeds, in the county of York, under the style or firm of Tannett, Walker, and Company, was this day dissolved by mutual consent, so far as relates to the said James Craven....'[2]

c.1870 Supplied four hydraulic overhead travelling cranes, designed by William Stroudley, to the Brighton railway works of the LB&SCR. The pumps and water tanks appear to have been mounted on the cranes, driven from lineshafts running the length of the shops [3]

1876 Members of the Iron and Steel Institute visited their engineering works. [5]

1881 Partnership change. '...the undersigned, Robert Tannett, Benjamin Walker, John Frederick Augustus Pflaum, William Henry Tannett, and Arthur Tannett Walker, lately carrying on business at Hunslet, in the borough of Leeds, in the county of York, in copartnership as Engineers and Tool Makers, under the style or firm of Tannett, Walker, and Company, was this day dissolved by effluxion of time. And notice is also given, that the said business will in future be carried on under the same style by the said Benjamin Walker and Arthur Tannett Walker only,...'[7]

1883 Engine for rail rolling mill at de Wendel & Cie, Hayange (source not identified: contemporary illustration in 'The Engineer' or 'Engineering').

1884 Newspaper article: 'STEEL MAKING IN SPAIN. The Sociedad de Altos Homos de Hierro y Acero de Bilbao have ordered from Tannett, Walker and Co., of Leeds, a very large pair of compound engines for rolling steel rails, bars or angles, or girders of H section. The weight of these engines is 400 tons, the strongest ever made. Coal is dear in Bilbao, and therefore the greatest economy bas to be used, and it has been found that the compound system in rolling, as in other work, requires a less number of boilers than the non-compound. Tannett, Walker and Co. are about to deliver the first instalment of the Bessemer machinery previously ordered for the same company in Bilbao. The centre crane weighs about 90 tons, and is made on Tannett, Walker, and Co. balance ram system. The whole plant will be the most substantial ever erected, and the valuable iron ores of Bilbao will soon be largely used on the spot, instead of being exported for manufacture elsewhere.'[11]

1895 Newspaper article concerning Chatham Dockyard: 'One of the most interesting items in the yard is she great hydraulic crane, constructed in 1885 by Messrs Tannett and Walker, of Leeds, and some idea may be gathered of this huge machine when it is stated that the total weight of steel and iron used in its construction is no less than 750 tons. As to its lifting power, it is marked at 160 tons; in other words, a man standing at the lever could, after the gear had been adjusted, lift out of the water and place on dry land a vessel and crew of the same size as that commanded by Columbus when he discovered America. It will, however, stand a test load of 320 tons, Its extreme height above ground is 125 feet, and its cost was £12,000. A fellow one to it is erected at Malta.' [12]. See below for what is probably more accurate information:-

1889 Newspaper article: 'THE LARGEST CRANE IN THE WORLD.-At the Chatham Dockyard there has been a test by the Admiralty of the largest and most powerful crane ever made, The weight lifted was 240 tons and the range or radins of the crane is 75ft. 3in., and its height is 125ft. In the presence of the Admiral of the yard, the chief engineer, and a large concourse of people, the monster crane took its load, raised it, and turned it round as if it had been a feather. The whole of the work has been carried out by Messrs Tannett, Walker & Co, engineers. of Leeds, who have in hand an 80-ton crane for the Arsenal at Woolwich, and who made the 150-ton cranes in connection with the 4000-ton hydraulic forging press at the works of Messrs John Brown Co. Limited), Sheffield, and are making similar cranes for Mr. Krupp, the Terni Works, and others.'[13]

1898 The company was registered on 4 May, to take over the business of engineers of the firm of the same name. [15]